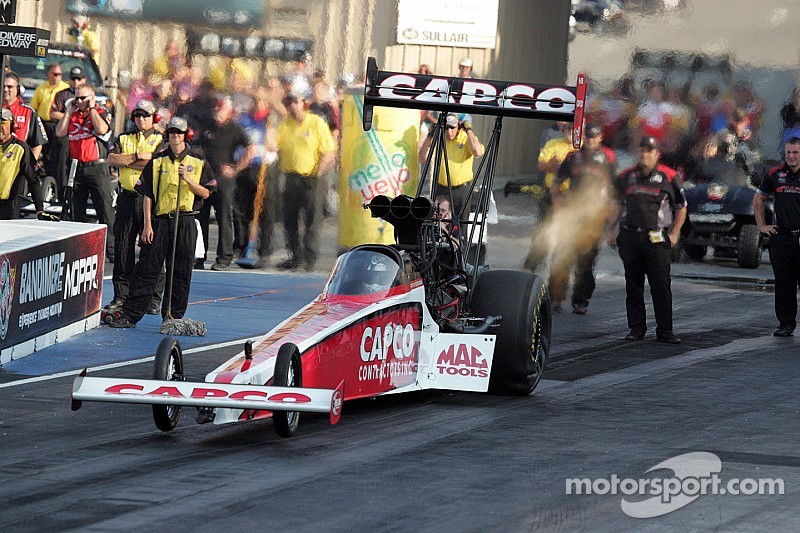 Steve Torrence knows he has a dragster capable of winning races in the NHRA Mello Yello Drag Racing Series Top Fuel class. But the young standout is also currently facing one of the harsh realities in a class loaded with talent.

There have been five different Top Fuel winners through five races during the 2015 season, but none have been Torrence. It also means Torrence’s current winless streak currently sits at 43 races, despite a successful 2014 season.

It’s hardly a slight on Torrence, as he currently sits sixth in the points standings in his 10,000-horsepower Capco Contractors dragster, but a testament to how impressive the class continues to be. Torrence, though, would also like to end his current drought, and the next opportunity comes close to home at the 28th annual O’Reilly Auto Parts NHRA SpringNationals presented by Super Start Batteries at Royal Purple Raceway, April 24-26.

“It’s hard to win one of these things,” Torrence said. “Last year, I had the best car I’ve ever had – and the best season, but we didn’t win a race. We were good enough to win but we didn’t get it done. That’s how tough it is out there. You need a fast race car and a great crew and a driver who’s on the lights and even after all that, you gotta have a little luck.”

Antron Brown (Top Fuel), Robert Hight (Funny Car) and Erica Enders-Stevens (Pro Stock) were last year’s winners of the event that will once again be televised on ESPN2. It marks the sixth of 24 races during the 2015 NHRA Mello Yello Drag Racing Series season and the annual stop in Houston marks the perfect opportunity for Torrence to jump back into the win column.

A year ago, Torrence advanced to the semifinals at eight different races, adding one final round appearance to the mix en route to a Mello Yello Countdown to the Championship berth and a sixth-place points finish. He has again been solid to start 2015, finishing as the runner-up at the NHRA Four-Wide Nationals in Charlotte. But Torrence is also after more and that includes turning on four win lights on Sunday.

“We stayed over on Monday (at the most recent event) in Las Vegas and had an awesome test so we’re going in (to Houston) with a lot of confidence,” said Torrence, who has four career Top Fuel victories. “Last year we qualified No. 1 and went to the semifinals so everything’s lined up for a big weekend. All we’ve got to do is outrun Tony Schumacher, Antron Brown, Shawn Langdon and the rest of those guys.

“But we’re looking forward to it. We had a really good car in Vegas. We got qualifying bonus points in three of the four sessions but it just dropped a hole in the second round against Richie Crampton. For him to go on and win the race was kind of tough, but we know we’re going have our days, too.”

Despite Torrence qualifying No. 1 in Houston a year ago, it was Brown who earned his second career Houston victory. As Torrence indicated, he will have to deal with the 2012 Top Fuel world champion, as well as a host of other standouts, including three-time time Top Fuel world champ Larry Dixon, who has three career victories at Royal Purple Raceway, eight-time and defending world champ Schumacher, Spencer Massey, Doug Kalitta, J.R. Todd, 2013 world champ Langdon, reigning rookie of the year Crampton and four-time runner-up Brittany Force.

“We feel good about where things are going,” Torrence said. “We’ve got our consistency and our confidence back and I’m really excited about going back to Houston.”

That comfort level is boosted by the surplus of family and friends that will be on hand all weekend in Houston. Torrence, who lives a few hours north of the Houston area in Kilgore, has learned how to handle all of the extra duties required when NHRA makes its two stops in Texas each season.

“It’ll be good to be back home in Texas and I know we’ll have a ton of support out there,” Torrence said. “The other thing is Houston will be the first race we run as a partner with the Chris Kyle Frog Foundation and I can’t wait to unveil the new paint job. It’s a great cause – helping the families of military and first responders – and it means even more since Chris was a Texan and loved the outdoors, just like I do.”

Enders-Stevens ready to come home, too

In Pro Stock, Enders-Stevens claimed the 99th win by a female driver when she won at her home track last season, ending the season with the Pro Stock world championship crown.

Force, Crampton and Enders-Stevens winners at The Strip at Las Vegas Motor Speedway