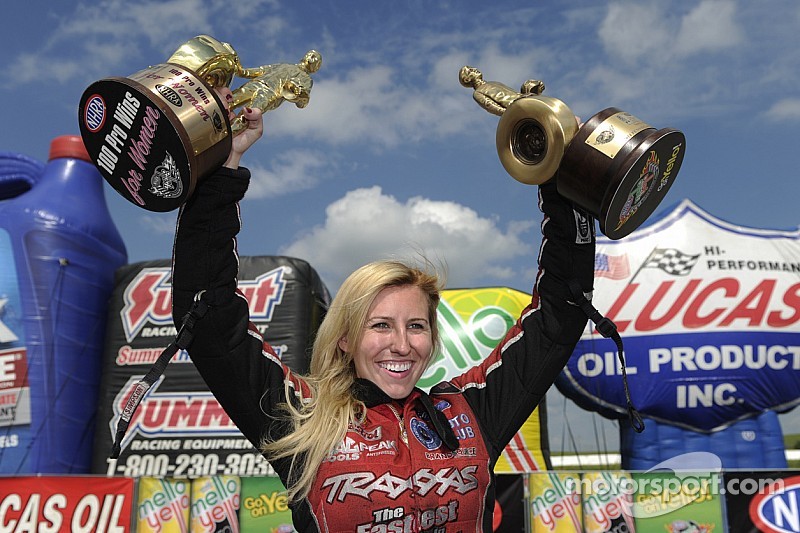 Looking back over the top moments of 2014, we start at #20, and the milestone win for Courtney Force at Topeka.

In the NHRA Mello Yello Drag Racing Series, victories by women are commonplace. After all, the car doesn’t know its driver is a woman, does it? Shirley Muldowney was the torchbearer, a three-time Top Fuel champion and the first woman to win a professional drag race; Angelle Sampey, too, owns three  titles in NHRA Pro Stock Motorcycle competition.

In fact, there have been 14 female race winners in the last 38 years who have captured 41 Wally trophies. While female racers have won in all four NHRA Mello Yello categories of Top Fuel, Funny Car, Pro Stock and Pro Stock Motorcycle, only Melanie Troxel has won in both Top Fuel and Funny Car.

There have been 18 female competitors in NHRA’s Top fuel category, 14 in Funny Car, six in Pro Stock and 16 in the Pro Stock Motorcycle class.

During the 2014 24-race NHRA season, there were plenty of reasons to celebrate female racers’ successes on the racetrack, but none more than Courtney Force’s emphatic late May victory at Heartland Park Topeka (KS) that marked the 100th race win for a woman in series history - and that history goes back more than 60 years!

Courtney Force was the No. 1 Funny Car qualifier for the race, defeating Dale Creasy Jr., Jeff Arend and Tommy Johnson Jr, before cutting down two-time Funny Car champ Cruz Pedregon in the final round with her Ron Douglas/Daniel Hood-tuned Traxxas Ford Mustang from John Force Racing.

Who was going to do it?

There were plenty of candidates attempting to set this milestone during the spring races, including Force, sister Brittany (who drives Top Fuel), Funny Car driver Alexis DeJoria, Pro Stock Motorcycle rider Angie Smith, Top Fuel driver Leah Pritchett and eventual 2014 Pro Stock champion Erica Enders-Stevens, the first (and currently only) woman to win a race and a championship in her class.

The exuberant Force, upon taking that 100th victory saluted them all: “This is for all the girls out there in any type of sport, any motorsport,” she said. In her second try at taking this all-important victory Courtney admitted, “I almost screwed up on the starting line; I was so nervous and the pressure was through the roof.”

Brittany Force on her sophomore season in NHRA's Top Fuel