The ride of a lifetime

Want to see what it is like to run down the quarter mile race track?

Ever wonder what it’s like to take a ride in a Super Comp drag racing car?

Frank Hawley, whose Frank Hawley Racing School has its headquarters in the Fairplex complex, home to Auto Club Raceway at Pomona, CA is taking media members for rides in a Super Comp car during this weekend’s NHRA 54th annual Circle K Winternationals, the traditional start to each drag racing season.

On Saturday morning, I had the privilege and opportunity to experience the incredible adrenaline rush that is drag racing. I’m still on top of the world, a full two hours later!

There’s a heck of a lot involved in taking someone for a ride - and there are programs for individuals and groups through Hawley’s website frankhawley.com - starting with clothing, installation and then, what every racer experiences, waiting for the chance to race.

I was equipped with a two-piece suit with arm-ties that were attached to the safety harnesses, including a dive belt. A baclava (which kept slipping close to my eyes) was under the snug helmet and a horse collar made sure my neck didn’t suffer from the G forces when Frank hit the loud pedal. Strapped in and ready, I watched as NHRA’s Scott Smith led us on our way to the staging lanes, through the paddock area and to the gate. 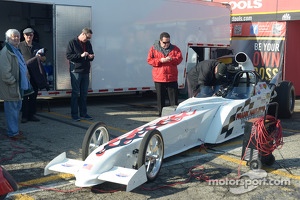 The Super Comp car is equipped with a self-starter, unlike the nitro machines that are pushed to the start line. Most of the Lucas Oil Sportsman classes and Pro Stock have onboard starters as well.

Like every other racer, we had to stop and wait while others went before us, moving slowly to our destination. Now I understand a bunch better what folks go through at the races – a heck of a lot of waiting for a short burst of excitement. And I spoke with some drivers afterwards, asking them if they “pre-visualize” their runs in the staging lanes, do relaxation and centering exercises and generally try to prepare to make it all happen by instinct? Yes, that’s what happens.

We came under the entryway to the track and Frank advised me that this was the time to put my visor down and get ready. I did what he told me and the next thing I knew, he was performing the burnout. What a jolt, I thought.

We backed up and waiting for the pre-stage half-moon blue light and then the horizontal stage light. And then, suddenly I was thrown back against the roll bar and off we went! Exactly 9.56 seconds later (at 154.69mph) we hit the quarter-mile mark and Frank let off the gas.

Way too soon it was over, but the adrenaline remains. We were guided to the return road and I kept wondering why we didn’t stop for our time slip, but Frank needed to get the car back to the pits, because it was starting to overheat. We stopped a bit short of our assigned space and then I unhooked my belts and began the process of extricating from the car. I didn’t want to, but there were two more media members waiting to take their rides.

Once out of the car and dressed like myself again, I began a hopping, skipping walk back to the media center with the largest grin on my face. Yep, it’s still there.

Line No. 8 for now, sees positive on day one of Pomona qualifying