The drag race they call 'The Big Go' 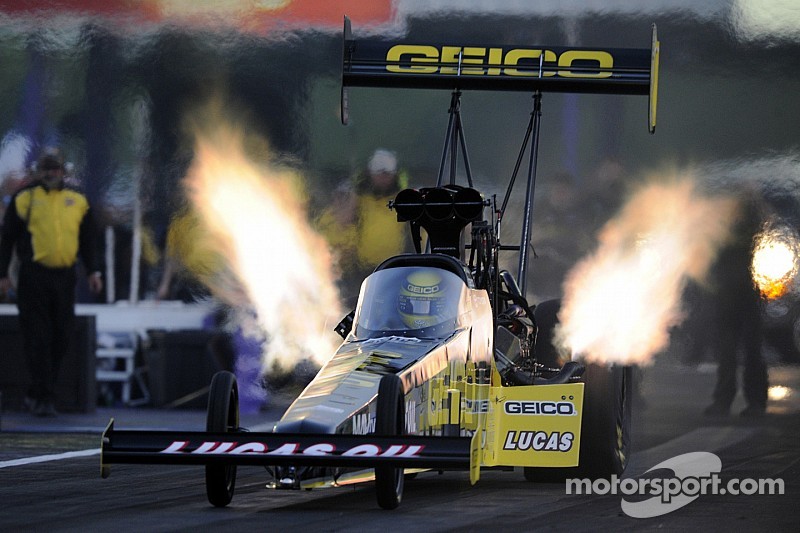 Why the U.S. Nationals is the race everyone wants to win.

Gray days were the norm at Lucas Oil Raceway outside Indianapolis where a horde of racers and fans gathered for the 60th annual Chevrolet Performance U.S. Nationals, the National Hot Rod Association’s (NHRA) premier event. The Nationals are the Big Go just as the Indianapolis 500 just up the road from this venue is the Greatest Spectacle in Racing; both are intoxicating paeans to speed and beauty.

Because this year’s race was an historic one - 60 years of competition on Labor Day weekend - NHRA and sponsor Chevrolet pulled out all the stops to celebrate the past, the present and the future of drag racing. Despite predictions of stormy weather, fans have glommed to the track for their dose of nitromethane, chats with the superstars of the Mello Yello Drag Racing Series and the opportunity to see the legends of the sport like Shirley Muldowney, Bob Glidden, Don “The Snake” Prudhomme, Tom “The Mongoose” McEwen, Big Daddy Don Garlits, Jim Nicoll (whose crash while racing Prudhomme nearly caused Snake to exit the sport) and many, many more.

Sure, the racing on track produced four first-time U.S. Nats winners, like rookie Top Fueler Richie Crampton (in photo), but the weekend belongs to the 60-year history of the event.

The action on the track had been furious since racing began in earnest on Friday afternoon. At this race there are five qualifying sessions, unlike other events on the 24-race calendar that holds four time trials. This is the Big Go, after all.  And with all four professional classes oversubscribed beyond the racing complement of 16 per category, much was on the line here in Indy.

Added to that is the lure of being part of the Countdown to One, a six-race playoff that crowns champions in each class - once the Chevrolet Performance U.S. Nationals are completed - and you’ve got drama, pathos and, on occasion humor. This race meeting also had the Traxxas Shootout for Top Fuel and Funny Car, coupled with Lucas Oil Sportsman classes of every stripe, cacklefests for the vintage drag racers and enough activities to encompass all daylight - and many night - hours.

By the time the five days of racing - with minimal rain delays - were completed, NHRA crowned four brand new U.S. Nationals winners in the professional categories, making the finals a joyous occasion for all the victors.

Incredibly, despite his three championships, Eddie Krawiec never - before this weekend - taken home a U.S. Nationals Wally. That streak ended for the Vance & Hines Screamin’ Eagle rider as he catapulted his Harley-Davidson ahead of V&H customer Jerry Savoie’s Suzuki. After a difficult two years developing the new V-Rod, Krawiec not only won the race but he and teammate Andrew Hines secured the top two seeds in the Countdown, Hines leading Krawiec.

In Pro Stock, Shane Gray’s Camaro defeated teammate Dave Connolly to give Chevrolet Performance a win in their namesake race. It was Gray’s fourth victory in the series and left him speechless and a bit flustered on the victory podium as he was given his Mello Yello medal for winning the race. Jason Line, who went out in the semifinals, is top seed for the six-race playoffs over Erica Enders-Stevens, who skipped two races leading up to the end of the regular season and ceded top pick to the surging Line - both of whom drive Chevy Camaro Pro Stock cars.

Alexis DeJoria earned her third Funny Car victory of the season over 16-time champion John Force’s Ford. Force had, the previous day, won the $100,000 Traxxas Shootout for the class. DeJoria, racing a Toyota Camry under the Kalitta Motorsports banner, becomes only the fourth female to win at the Nationals and the most successful female in her class with her third win this year. The victory propelled her to fourth in the standings behind Force, his teammate Robert Hight and perennial bridesmaid Ron Capps.

In Top Fuel, it sure looked like Tony Schumacher’s weekend as he set the top qualifying speed for the race and won his class’ Traxxas Shootout on Saturday night, but the nine-time U.S. Nationals winner, looking for No.10 fell in the semifinals to eventual winner rookie Richie Crampton, who was a 10-year crew member for team owner Morgan Lucas before taking the helm of the team’s Top Fuel dragster this year. It’s Crampton’s second win of the season, having earned his first Wally at Englishtown in early June. The Australian won a close contest over Steve Torrence, 3.766 seconds at 327.98 to the latter’s 3.799/327.82 pass.

The NHRA takes a one-weekend breather before commencing the Countdown to One with its second race of the year at what can only be called the “Bellagio of Drag Strips”, Charlotte’s zMax Dragway.