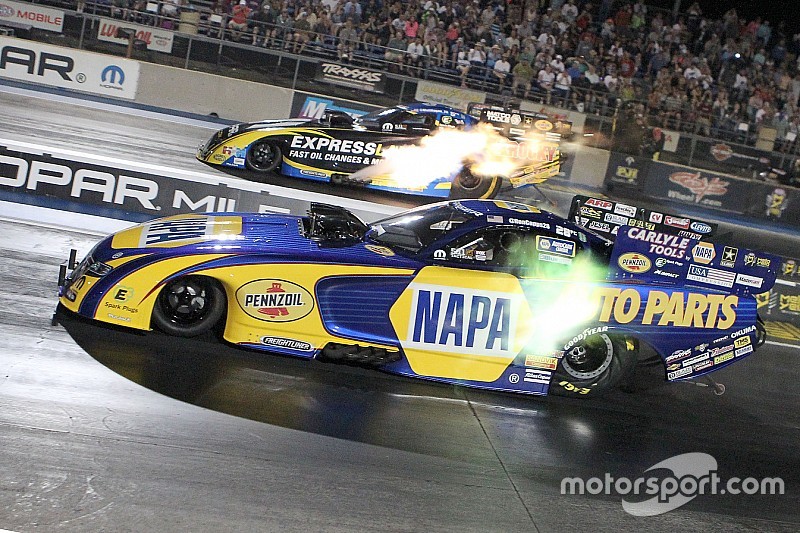 Most nitro teams competing in the 2017 NHRA Mello Yello Drag Racing Series will gather for a test this week as they prepare for next week’s season-opener at Auto Club Raceway in Pomona, California. Anne Proffit looks ahead.

Wild Horse Pass Motorsports Park outside Phoenix, the venue for the second of 24 races on the nitro calendar, will provide Funny Car and Top Fuel teams the perfect opportunity to shake out the cobwebs since last November’s season finale, also in Pomona. They’ll check out new personnel combinations and new parts combinations as each car vies to have the champion’s trophy following the late-season six-race Countdown to the Championship playoffs.

Don Schumacher Racing will start the 2017 NHRA Mello Yello Drag Racing Series season next weekend with seven cars, as it did last year. Unfortunately, that’s a reduction in entries as DSR ended 2016 with eight cars.

Testing at Phoenix will be DSR’s two 2016 champions, three-time Top Fuel titleholder Antron Brown and Ron Capps, who last year ended his long and challenging voyage to a first Funny Car title. This duo will be joined by nine-time champion Tony Schumacher and Leah Pritchett in Top Fuel, while Matt Hagan, Jack Beckman and Tommy Johnson Jr. will handle the balance of DSR’s Funny Car machines.

Missing in action, for hopefully only the start of the year is 2013 NHRA Top Fuel titleholder Shawn Langdon, as the team continues to search for backing for his dragster. Since joining DSR toward the end of 2015, Langdon has secured four Wally winner’s trophies in 30 races; he remains with the team as they search for proper backing.

The 2016 24-race season marked the fourth time Don Schumacher Racing has swept both nitro-powered world championships, with Brown and Capps. The team has secured a total of 293 Wally winner’s trophies, but team owner Don Schumacher still isn’t satisfied and is certainly not complacent.

“You have to get better every day, every race and every year,” he said. “You have to keep moving forward to stay ahead.”

Brown continues with Brian Corradi and Mark Oswald as co-crew chiefs on his car, while Brad Mason joins as car chief to complete one of the most potent quartets in the sport. Last year they took seven victories in 11 final rounds with 55 elimination-round wins. In Top Fuel, eight-time champ Tony Schumacher returns with Mike Green as his crew chief, assisted by Phil Shuler, who worked with Green from 2003 to ’06 on Funny Cars driven by Capps and Tommy Johnson Jr.

Top Fuel racer Leah Pritchett, who last year earned her first Wally winner’s trophy and raced for DSR in 15 events, has enhanced sponsorship with Papa John’s Pizza, who will support her squad for 20 of 24 events. She has backing from FireAde 2000 and occasional backing from Mopar/Pennzoil, while DSR’s director of racing Todd Okuhara returns as her crew chief, assisted by Joe Barlam and team manager Scott Okuhara.

The Terry Chandler-supported Make-A-Wish Dodge Charger R/T driven by Tommy Johnson Jr finished second to teammate Capps in 2016 and is back for another attempt at a title. Led by crew chief John Collins and assistant Rip Reynolds, this Charger has, cumulatively, been the best Funny Car over the past three NHRA seasons, with two third places to go with last year’s runner-up spot.

Two-time champ Matt Hagan is back with crew chief Dickie Venables and assistant Michael Knudsen after finishing third last year with four wins. Jack Beckman, who won the 2012 title has another crew to break in after his team finished fifth in the title race last year. Co-crew chiefs are John Medlen and Dean Antonelli, who both used to work with John Force Racing and Neal Strausbaugh, who moves over from Tony Schumacher’s squad.

There are plenty of changes at John Force Racing as well, as team owner John Force welcomes back Jimmy Prock, who led the ageless Funny Car ace to his 16th and most recent championship in 2013. He’ll be assisted on the Peak Chevrolet Camaro by Chris Cunningham, who joins JFR after working with Prock the past two-plus seasons at DSR.

Force’s son-in-law and JFR president Robert Hight continues to work with crew chief Mike Neff, who will be joined on the Auto Club of Southern California Chevrolet Camaro by Jon Shaffer (who tuned John Force’s car the past two seasons) and Jason McCulloch, who joined the team last year after working with Alan Johnson Racing on the Al-Anabi dragsters and floppers.

Daughter Courtney Force’s team remains the same, with Dan Hood and Ronnie Thompson doing the tuning, and she acquired sponsorship with Advance Auto Parts over the winter. Courtney’s sister Brittany, who drives the Monster Energy Top Fuel dragster – an anomaly in that family – continues to have the services of Brian Husen and tuning consultant Alan Johnson. Last year she earned her first three victories at NHRA’s top level and finished sixth in points.

At Kalitta Motorsports, change is in the air for two of the team’s four drivers. Doug Kalitta’s Top Fuel team remains nearly as it was in 2016 when he drove to the runner-up spot in the championship, with Jim Oberhofer as crew chief and Troy Fasting assisting. Kalitta has a new teammate in rookie Troy Coughlin Jr., who has Connie Kalitta as his crew chief assisted by Rob Flynn.

Coughlin intended to race a part-time schedule this year, but when Kalitta’s 2015 Funny Car champion Del Worsham elected to return to his family team, suddenly there was a spot for the youngster in the Top Fuel arena when teammate JR Todd took over Worsham’s FC seat.

Joining Todd on the Funny Car side, where he’ll drive the DHL Toyota Camry is Alexis DeJoria, who  didn’t compete in every race in 2016, after suffering injuries at Sonoma in late July and again at Las Vegas in October. She’s healthy and ready to go in the Patron Toyota Camry prepared by co-crew chiefs Nicky Boninfante and Tommy DeLago.

Kalitta Motorsports has a part-time entry for driver Paul Lee, who began working with the team last year. He’ll drive the McLeod Toyota Camry with tuning by Glen Haszar and Nick Castertano.

Because this is winter testing, the entire field of participants hasn’t been confirmed yet. But the weather is forecast to be spectacular for testing with partly cloudy to clear skies and temperatures in the mid-70s during the daytime and mid-40s at night.

Enders and Elite ready to win again with Chevrolet