Shirley Muldowney - 'The First Lady' of the NHRA 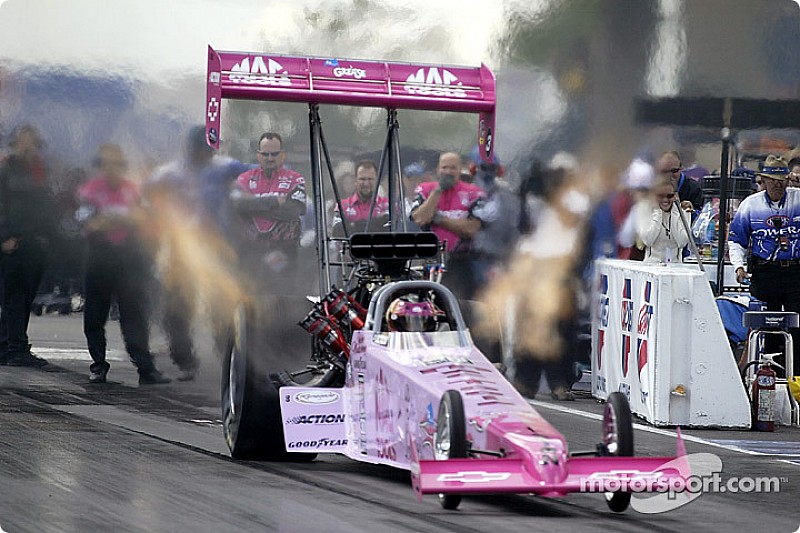 Shirley Muldowney won the 1982 edition of the U.S. Nationals.

Shirley Muldowney had fire in her eyes when she pulled up to the starting line of the 1982 U.S. Nationals Top Fuel final. “I don’t think I could have handled losing that event, it just wasn’t in the cards,” said Muldowney, who defeated Connie Kalitta in the final elimination round. “If I was ever going to win a race, I was going to win that one.”

I was the luckiest son of a gun in Indy that day.

The very next year, Muldowney experienced a different feeling at Indy. There was a weight bar on the track that no one noticed until Shirley hit it. The 18-time NHRA winner told Motosport.com, “Luckily, Gary Beck, who I was qualifying against, didn’t leave the starting line, and it’s a good thing because that car took a right after the lights like you couldn’t believe. And it cranked right up on top of the guard rail, and it teetered from side to side at however fast, and boy it bounced down on all fours.” Muldowney added, “I was the luckiest son of a gun in Indy that day.”

Every dragster on the planet wants to win the Big Go, and Muldowney’s dream began in 1963 when she watched Don Garlits at South Glen Falls Dragway in Saratoga County, New York. Shirley recalled, “He’d light that thing, and he’d go down through there like Grant took Richmond, and it was just beautiful to watch. That’s where I got my motivation. Little did I know, in a few years I’d be racing him at Indy.”

Shirley grew up a street racer in the 1950s in Schenectady, NY, and by the time she faced Garlits in the 1975 Top Fuel final at Indy, she learned to channel her New York swagger into the art of drag racing. “You put the helmet on, fire the car, and you got to realize where you are. You are in your office, and a lot of good people are giving you everything they could possibly give you to work with. Now it’s in your hands, and that’s when I liked it best because I always had the final say whether we won or lost.”

I was always a sound and feel driver, that’s what I relied on

Garlits beat Muldowney in the 1975 final, but Shirley would go on to reach the top of the drag racing world in 1982.

Teamwork is essential to the success of a drag racer, and Shirley is quick to credit her crew in ’82. “I was always a sound and feel driver, that’s what I relied on, and I remember that race well, that car was right. They made the right decisions, and I never had say in lane choice, but I trusted my people.”

When you combine a winning attitude with the right car, you get a recipe for success. “When it’s your day, it’s your day regardless of where you are, but if it’s ever going to be your day, let it be Indy.”

Shirley understands what the drivers are chasing at the Chevrolet Performance U.S. Nationals, and she will be one of the legends honored this weekend at the event’s 60th Anniversary.

“I would have to say Indy was always my favorite race, and I’m not alone because everybody looks forward to Indy. It’s the Big Go.”

History and prestige collide at the 60th U.S. Nationals