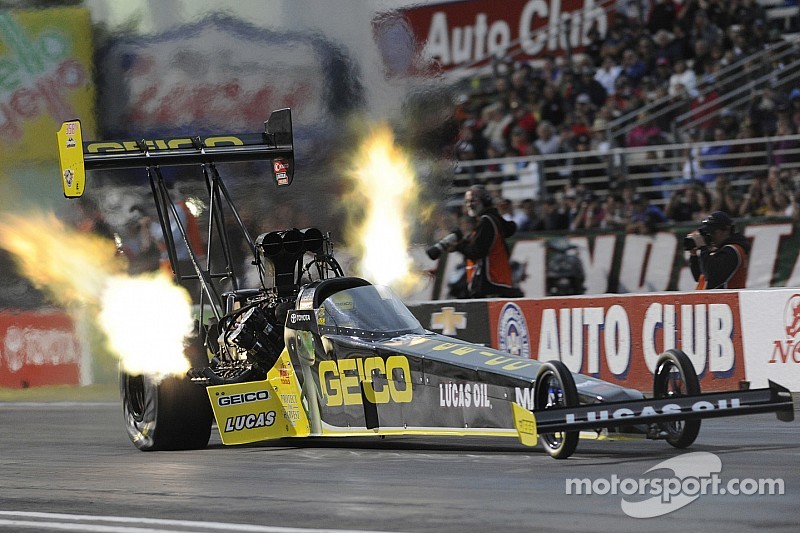 The reigning rookie of the year hasn’t lost a first-round matchup through five races in 2015 !

Driving a 320-plus mph dragster will never become easy, but Crampton’s recent performances indicate just how much improvement he continues to make. The reigning rookie of the year hasn’t lost a first-round matchup through five races in 2015, winning the most recent race in Las Vegas.

It marked the third career win in Crampton’s young career and the talented driver will look to add to that at this weekend’s 28th annual O’Reilly Auto Parts NHRA SpringNationals presented by Super Start Batteries at Royal Purple Raceway, located just east of Houston.

The key to success is going to be getting your race car to go from A to B on that hot track surface.

"It's absolutely a lot more comfortable the second time around," Crampton said, referring to his second Top Fuel season. "I know it's my sophomore season, but a lot of times I forget that I'm still so new to this. I'm getting more and more comfortable every week and trying to focus on doing a good job of driving that race car. I'm extremely excited with how our 2015 season is looking. (Crew chief) Aaron Brooks and the team have got a really consistent, good race car. It's exciting to start out the year like this."

Antron Brown (Top Fuel), Robert Hight (Funny Car) and Erica Enders-Stevens (Pro Stock) were last year’s winners of the event that will once again be televised on ESPN2. The O’Reilly Auto Parts NHRA SpringNationals marks the sixth of 24 races during a 2015 season that has already seen plenty of high moments for the Australia native and naturalized U.S. citizen.

After solid second-round performances at the first three events of the season, Crampton, who claimed the prestigious Chevrolet Performance U.S. Nationals as one of his two wins in his rookie campaign, advanced to the final foursome at the NHRA Four-Wide Nationals.

That followed with the victory in Las Vegas, beating three-time world champion Larry Dixon in the final round to climb to fifth in points. Crampton became the fifth different winner in Top Fuel through five events, a clear indication of how tight the class continues to be.

"There is no easy side of the ladder and there are no east rounds," Crampton said. "Anyone can win in 2015, it seems like. It makes everyone dig that much deeper and try that much harder, knowing that every guy you line up against can send you home on race day. It's an amazing amount of competition, and the level all the teams have risen to this year is unparalleled."

But an early start could be paramount for later in the season and into the Mello Yello Countdown to the Championship playoffs. Crampton qualified for the Countdown in his rookie season, finishing ninth, but an increased comfort level could pay dividends for continued success during the season and for building momentum into the Countdown.

"As you can see, the top five in the points are bunched up by less than two rounds," Crampton said. "If you got to the U.S. Nationals at Indy with the points standings as tight as they are right now, it could make a world of difference if you start in the second, third, fourth, fifth position in points, based upon one bad round of racing earlier in the season. As close as the points are going to stay, I believe, having early momentum like this and being within striking distance of those top few positions is key to having a good Countdown."

Crampton’s second appearance at Royal Purple Raceway is what he hopes is a winning one, but he will once again face off against the top drivers in the Top Fuel class, including Brown, who earned his second career victory in Houston and also beat Crampton to claim the win at the Four-Wide Nationals in Charlotte this season. Other standouts include Dixon, who has three career victories at Royal Purple Raceway, eight-time and defending world champ Schumacher, Spencer Massey, Doug Kalitta, J.R. Todd, 2013 world champ Langdon, Steve Torrence and four-time category runner-up Brittany Force.

But Crampton has immense faith in Brooks and his team, which has already shown a penchant for getting their dragster to perform consistently and run quickly in any weather conditions.

In Funny Car, Hight claimed his second victory at Houston when he defeated Jack Beckman in the final round last season, while teammate and 16-time Funny Car world champ John Force, who won in Las Vegas, has seven wins in Houston, the most for any driver in a pro category, but none since 2002. Two-time world champ Tony Pedregon and his brother, two-time world champ Cruz Pedregon, have combined to win seven Houston races, while class stars also include reigning world champion Matt Hagan, Ron Capps, Courtney Force, Alexis DeJoria, two-time Houston winner Del Worsham, Tommy Johnson Jr. and Tim Wilkerson.