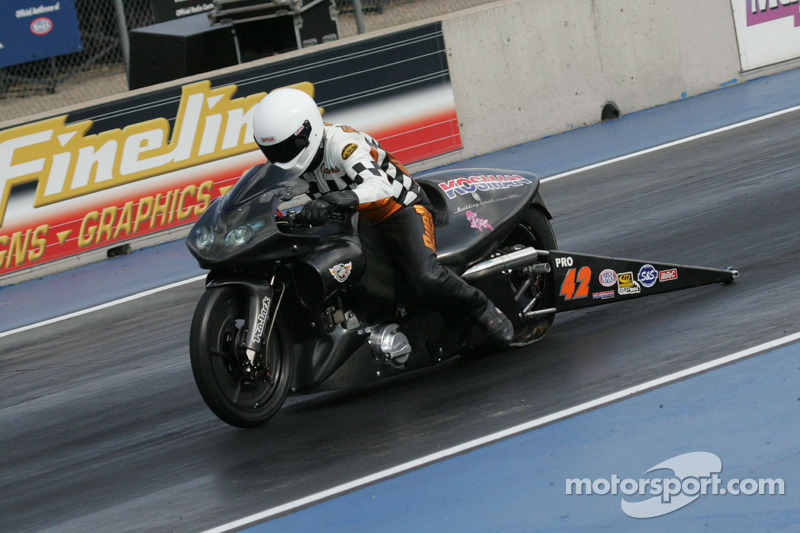 Andrew Hines and his Screamin’ Eagle Vance and Hines Harley-Davidson team went to work in the off-season, determined to produce something far different in 2014.

ENGLISHTOWN, N.J. — Intent on making up for a season of disappointment, Pro Stock Motorcycle rider Andrew Hines and his Screamin’ Eagle Vance and Hines Harley-Davidson team went to work in the off-season, determined to produce something far different in 2014.

It may just be three events, but the results couldn’t be more encouraging for Hines and his Harley-Davidson teammate Eddie Krawiec. Hines is first in points, Krawiec is second and the duo has traded wins at the past two events. Heading into this weekend’s 45th annual Toyota NHRA Summernationals at Old Bridge Township Raceway Park, Hines likes the path he is on.

“Having this performance has really helped rejuvenate everyone at the shop,” Hines said. “When we get some good performances, see the bikes No. 1 and No. 2 and get some wins, it pumps a whole lot of energy into the facility. When we roll out and go to the next race expecting to get a Wally instead of just hoping, that’s a breath of fresh air.”

This event marks the fourth of 16 races for the two-wheel category on the NHRA Mello Yello Drag Racing Series circuit and Hines, who won three championships from 2004-2006, is already back in championship form. After finishing second to Krawiec in 2012, his third season finishing second in points, Hines finished outside of the top 10 for only the second time in his career in 2013.

He failed to make the Countdown to the Championship and though Hines won a late-season race in Charlotte, he was eager to get to work in the off-season. The results were evident immediately as Hines was back to his customary high qualifying positions and impressive results. He won in Charlotte and followed that by qualifying second in Atlanta and advancing to the final round.

“We’ve put in a ton of work to figure out what makes our V-Rods faster,” Hines said. “It was a huge endeavor of our team and we picked up more than 20 horsepower. We have the horsepower and you’re seeing some impressive speeds, and things are getting better and better.”

That may not be what the competition in the class wants to hear, but Hines is pleased to send that message back to his team’s shop just outside of Indianapolis.

“Last year was a rebuilding year, but if we didn’t have the support group at the shop we wouldn’t be having this kind of success,” Hines said. “They’re beaming with excitement right now and that’s a cool feeling.”

But don’t expect Hines, who has 33 career victories including an Englishtown win, to become content, especially with the list of challengers on his tail. That certainly includes his teammate Krawiec, who won in Atlanta, as well as defending event winner Ray, who has been the No. 1 qualifier at two events in 2014, reigning world champion Matt Smith, John Hall, Hector Arana Jr. and Gainesville winner Steve Johnson.

“Now it’s just a matter of refining,” Hines said. “Last year we were just trying to find horsepower, but the focus from here to the Countdown is to get (the bikes) dialed in for every run and make them more efficient. We’re on a good roll right now and we want to put both bikes in the final. That’s the ultimate goal every race.”

For that to happen at Englishtown, Hines knows his Screamin’ Eagle Harley-Davidson will need to be quick and perhaps even record-breaking quick. With ideal conditions expected for the weekend, Hines believes the E.T. and speed records have a strong chance to fall. He also didn’t rule out the possibility of someone making the landmark first 200 mph run in the class.

“It looks like it may be possible and if the conditions are conducive, we’ll go for it, that’s for sure,” Hines said. “There are a lot of guys who have been running big speeds at the last couple races and I think some other heavy hitters will try to go for it. It would be great to (go 200 mph) at Englishtown. You’re definitely going to see some stellar numbers.”

Greg Anderson leads the Pro Stock category with five career wins at Raceway Park in the factory hot rod class and is looking to make an impact after returning to competition in Houston following heart surgery. Anderson’s teammate Jason Line has three wins in New Jersey, as does five-time Pro Stock world champion Jeg Coughlin. Allen Johnson has three wins this season but nobody has been better than points leader Erica Enders-Stevens, who has two victories in 2014 and is looking for her first Toyota NHRA Summernationals win. New York native Vincent Nobile, veteran V Gaines and category newcomer Chris McGaha are other top contenders in the 200 mph class.

As always, fans will have the opportunity to interact with their favorite drivers as they’re granted an exclusive pit pass to the most powerful and sensory-filled motorsports attraction on the planet. This unique opportunity in motorsports gives fans direct access to the teams, allowing them to see firsthand the highly-skilled mechanics service their hot rods between rounds, and enjoy some cherished face time and get autographs from their favorite NHRA drivers.

The event will also feature thrilling racing action in the Lucas Oil Series and the Pro Mod Series.