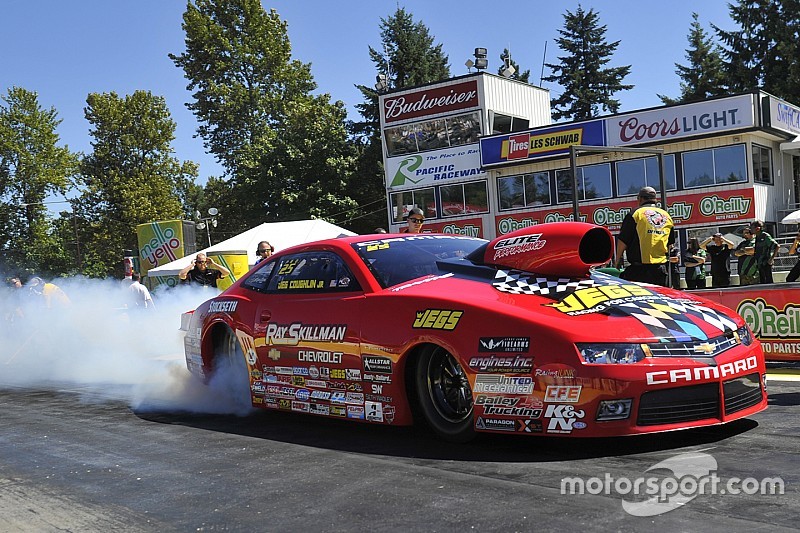 “It’s a pretty dramatic change to see the hood of a Pro Stock car without that big hood scoop we’ve had for so many years but it sure is a slick-looking design,” Coughlin said. “Then you get a look under the hood and see the intakes and how it all attaches to the top of the motor and you really start understanding that we’re in a brand-new era.

“Personally, I can’t wait to drive this thing. I know all the fellas at Elite Motorsports have been going ’round the clock to figure out how we’re going to run these cars, and I know everyone in the class will be on a huge learning curve, but it’ll be fun.”

There's a lot going on in Pro Stock and a lot of the teams are outside their comfort zone with the new rules.

The sleek new Pro Stock cars will feature fuel-injected engines, shorter wheelie bars, no hood scoops and a 10,500 RPM rev-limiter, and are sure to be fan favorites as the 2016 NHRA season kicks off with this weekend’s tradition-rich 56th annual Circle K NHRA Winternationals at historic Auto Club Raceway at Pomona.

Shawn Langdon (Top Fuel), Matt Hagan (Funny Car) and Jason Line (Pro Stock) were last year’s winners of the race that will be televised nationally on Fox Sports 1 (FS1), including live coverage of Sunday’s finals at 5 p.m. (ET). Despite the vast changes, Line is one of the favorites this weekend considering his recent dominance at the Winternationals.

He’s after his fifth victory overall at the season-opening event and third in a row in his Summit Racing Equipment Chevy Camaro, but Coughlin hopes to put an end to that impressive string. He didn’t race on a full-time basis a year ago, only making three appearances with the Elite Motorsports team, but that experience proved to be a beneficial one.

Coughlin, whose last championship came in a memorable 2013 campaign, decided to go back to racing in Pro Stock on a full-time basis in 2016 and the opportunity to do that with Elite Motorsports proved to be too good to pass up. Joining a talented squad that also includes two-time defending champion Erica Enders, as well as talented drivers Vincent Nobile and Drew Skillman, last year’s top rookie, has made the transition even easier.

“Having that opportunity to run the three races last year with Elite has really turned out to be beneficial to this new deal," said Coughlin, who has 58 career Pro Stock victories. "At the time, there were no discussions of racing together in 2016 and we had nothing going with Mopar until much later in the year. But having worked together during that time, it made this transition much easier.

"There's a lot going on in Pro Stock and a lot of the teams are outside their comfort zone with the new rules. I think it's exciting to gain new, younger fans with the more production-type finish and appearance of these cars, and the mentality of everyone at Elite is that we are fired up for the massive challenge this year will bring. Like they say, only the strong will survive."

Coughlin’s wealth of talent and experience should pay dividends for the team, but the longtime standout has also embraced the new direction of the class. Seeing the work ethic of the team over the off-season has been contagious as well and Coughlin has noticed a strong sense of excitement within the group.

But Coughlin has always embraced new challenges with open arms and his forward-thinking mindset could lead to plenty of new achievements to add to an already storied Pro Stock career.

“Nick Ferri, Jake Hairston, Lump (Brian Self), and the rest of the guys at the Elite shop have been working around the clock to get us up to speed for Pomona," said Coughlin, who has the fourth-most Pro Stock wins in NHRA history. "We've burned a fair amount of 'midnight oil' to get ourselves fully prepared for the race and the season ahead.

"It's a super exciting time with our new partnership with Mopar and the sport turning a new chapter with FOX that will really push us all upward. I'm ready to get started."