Troxel is a contender heading to Dallas 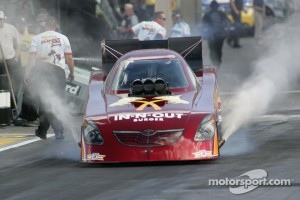 DALLAS (Sept. 21) – Great things are just over the horizon for the In-N-Out Burger Toyota Funny Car, and superstar driver Melanie Troxel can feel it.

After putting up impressive numbers in qualifying the last two races, Troxel believes that the In-N-Out car is about to make its presence felt in the final races of the NHRA Full Throttle Series season, beginning with this weekend's national event at the Texas Motorplex.

"We've still got five races left this season to learn a lot," Troxel said. "We've got a good chance to win a race before it's all done. We're going to keep picking away at the performance of the car.

"We've got one of the best cars out here, we just need a little more consistency at this point."

Troxel qualified second at Indianapolis in hot conditions and third in the cool weather of Charlotte a week ago.

"We're solving one problem at a time," Troxel said. "It's unfortunate it didn't come together sooner and we're not a contender for the championship, but I think we'll play a role on how things hammer out in the class the rest of the season."

Troxel said she's so happy to see things come together for her R2B2 Racing teammates as well.

"We've been through so many changes this year," Troxel said. "You don't want to lose sight of the fact we've made so much progress through the course of the season. We expect a lot of ourselves. Aaron Brooks, John Medlen and the rest of the guys have put in a lot of meticulous effort to work all the bugs out of the car."

Qualifying for the AAA of Texas NHRA Fall Nationals get under way at 2:15 p.m. CDT on Friday with two sessions scheduled. Qualifying continues at 11 a.m. on Saturday with Sunday's eliminations also starting at 11 a.m. ESPN2 will air the qualifying on Sunday at 1:15 a.m. EDT. The elimination show will air at 7 p.m. Sunday.

Langdon looking to take the next step at Dallas