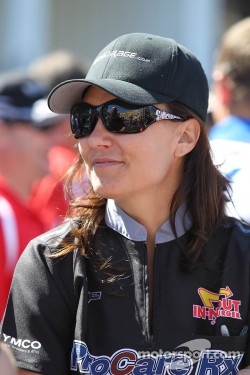 INDIANAPOLIS (Aug. 29) -- Drag racing star Melanie Troxel is hoping her return to the town she once called home will be a victorious one and she'll have two chances to make it so when the 57th annual Mac Tools U.S. Nationals begin Friday at Lucas Oil Raceway.

Just as she has at seven previous events this year, Troxel, a past resident of Brownsburg who now resides in Duluth, Ga., will be racing in two professional categories -- Funny Car and Pro Mod.

In Pro Mod, Troxel will be an easy pick to win it all as she returns to the seat of the twin-turbo In-N-Out Burger '53 Corvette she raced to a double world record of 5.772 seconds at 258.71 mph earlier this summer in Englishtown, N.J. It's also the car she expertly drove to a convincing victory in Bristol, Tenn.

"I'm back in the Silver Bullet!" Troxel said, referencing the team's nickname for the silver-painted hot rod. "Obviously, it's very exciting to be driving the quickest and fastest Pro Mod car in the world. It doesn't guarantee us a thing when qualifying starts. We'll have to prove ourselves all over again just like we do at every drag race, but it is nice to know we'll have the potential to run at the front.

"Pro Mod hasn't raced since June so I'm sure everyone has been working hard on their cars to make them faster. It's Indy, so I would expect a fight from the start."

Funny Car presents a different challenge for Troxel as her Aaron Brooks-led flopper squad continues to search for an ideal tune-up for their In-N-Out Burger Toyota Solara. A recent test gave them hope and helped them decide on which chassis they would use in Indy.

"We brought out a brand new chassis but ultimately we decided that for the time being we would stay with the chassis we've been using," Troxel said. "We were very, very consistent in Brainerd and that carried over to testing so our confidence with this car is growing.

"John Medlen (vice president of research and development) likes the new direction we've taken the tune-up and he's spent a ton of time on the clutch dyno figuring out some other things we're going to try so we're optimistic."