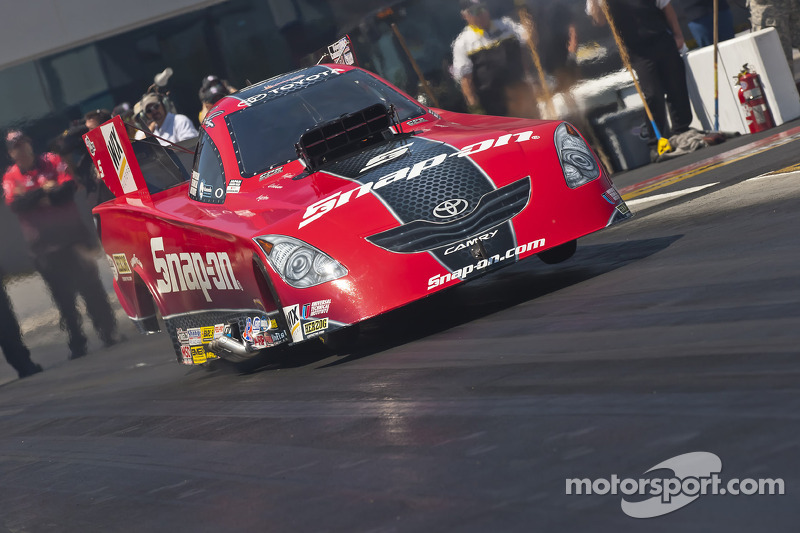 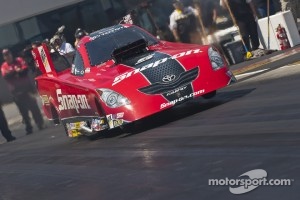 Pedregon defeated Tim Simpson, Bob Tasca and Melanie Troxel before besting Ron Capps in the final with one of the top runs of the day – registering a 4.20-second pass with track temperatures exceeding 130 degrees. The win also continued his late-season winning ways as he won two of the six Countdown to the Championship events last season. He is now just seven points out of the championship lead, while heading to Maple Grove Raceway in Reading, Penn., where he won a year ago.

Antron Brown led the Toyota contingent in Top Fuel by advancing to the semi-finals today. In the process, he extended his consecutive round-win streak to 14 before having it snapped. Brown defeated Doug Kalitta in the opening round and Rod Fuller in round two to advance to his eighth straight semi-final or beyond. He then lost to teammate Spencer Massey in the semi-finals. Despite the strong effort, the Matco/Toyota driver dropped to second-place in the Countdown play-off chase - seven points behind Massey.

Both Al-Anabi Racing drivers were upset in the second round as Larry Dixon fell to Brandon Bernstein and Del Worsham was eliminated by Massey, who also defeated Shawn Langdon in a tight first-round battle.

The NHRA Full Throttle Drag Racing Series Countdown to the Championship playoffs resume next weekend, September 30 - October 2, at the Maple Grove Raceway in Reading, Penn., with the Uni-Select Auto Plus Nationals.

NOTES:
- Cruz Pedregon earned his first victory of the season in his third finals appearance today. The triumph was the 30th of his Funny Car career and it marked his 66th Funny Car final. He had advanced to the finals at Gainesville and Englishtown earlier this season.

- With the win, Cruz Pedregon jumps up to third-place in the Countdown to the Championship playoffs – just seven points out of the series lead with four races remaining.

- Antron Brown extended his round win streak to 14 before eventually having it snapped in today’s semi-finals. He currently sports a 20-2 record in elimination rounds over the last six races. He has now advanced to the semi-finals or beyond in each of the last eight races with four wins – Sonoma, Brainerd, Indy and Charlotte; and four semis – Chicago, Denver, Seattle and today in Dallas.

- In the Top Fuel point standings, Antron Brown is currently in second place, followed by Del Worsham in third and Larry Dixon in fourth. Shawn Langdon is in eighth-place, while Morgan Lucas is in the 10th position.

Cruz Pedregon, Snap-On Tools Toyota Camry Solara Funny Car: "Bring on the heat – we love it when it’s hot! Our Snap-On Toyota was really responsive from the moment we took it off the trailer this weekend. We came out with a mindset of making four solid qualifying runs and then we came into race day looking at each round as if it was qualifying. We made some good decisions in the pits today having to adjust to the rising heat. Then in the final, we certainly weren’t going to take Ron Capps and that team lightly, so we decided we’re going to go for it and leave everything out there (as Pedregon ran the fastest pass of the final three rounds in the finals). When the NHRA instituted the Countdown they wanted close championship battles – and that’s what they’re getting with three drivers within seven points of each other for the lead. We’re not going to worry about the championship yet, though, all of our focus is going to solely be on Reading next weekend."

Antron Brown, Matco Tools Toyota Top Fuel Dragster: “It was a tough race with Spencer. We actually dropped a cylinder on the run. The track was a lot better than we expected. But, we’re still in good shape in the Countdown to the Championship. We have a win and a semi-final round finish – if we do that the rest of the way (four more races), we’ll be just fine.”