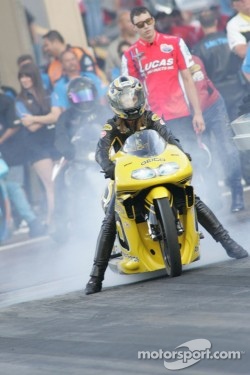 Stoffer accepted responsibility for the defeat to Matt Smith, even though her run was slower, and then went to Smith's pit area to congratulate him before his semifinal matchup.

Stoffer qualified fifth and then made the fastest pass of the first round in defeating Michael Ray, going the quarter-mile in 6.880 seconds at 195.93 mph.

That put her GEICO Suzuki against Smith in the second round, with Stoffer getting the lane choice. As Stoffer was preparing to stage, though, Smith started having problems with his bike. Stoffer and the GEICO team waited for Smith to be able to stage.

After that, nothing went right.

"I waited for him, and I would do it again," Stoffer said. "I was sitting on the starting line thinking, 'Oh, he's not going to run. He hurt his bike. All I have to do is cut a green light.' I figured he would squirt out and then die or something like that.

"That was my fault, 100 percent my fault. I was thinking, and I know better than to think on the starting line."

"While I sat there and waited, I thought, 'All he wants me to do is red-light so he can go to the next round. I'll make sure it's good and green,'" Stoffer said "I didn't plan on it being that green. That's what happens when you think on the starting line.

Stoffer remains second in the Pro Stock Motorcycle points standings, with four races remaining in the six-race Countdown to the Champioship. She's 67 points behind Eddie Krawiec, who also lost in the second round in Dallas.

"The GEICO bike was consistent all weekend long, except for that last pass," Stoffer said. "The guys are going to look at it and make sure we've got a good motor going into Reading."