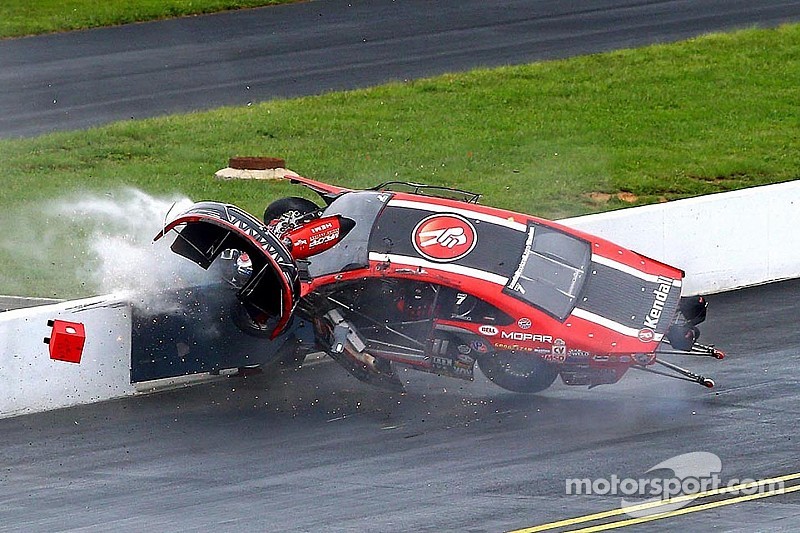 A scary crash and rain forced the NHRA to end the action at Charlotte early yesterday.

NHRA had a problem yesterday at what’s considered the “Bellagio of dragstrips” zMAX Dragway. The four-lane tour de force constructed by Speedway Motorsports adjacent to Charlotte Motor Speedway is host to two NHRA Mello Yello Drag Racing Series weekends each year: the Four-Wide Nationals in the spring and the Carolina Nationals in late summer.

This year’s Pep Boys Carolina Nationals looked to be going on as normal on a cool, cloudy Sunday. The Top Fuel and Funny Car contingent completed their first rounds and it was time for Pro Stock and Pro Stock Motorcycle. With this race being the first in NHRA’s 6-event Countdown to the Championship playoffs, there’s a lot at stake and there were a few upsets in Round 1 of eliminations.

Then came the catastrophe...

Then came the catastrophe - and it’s not the first time this has happened so NHRA shouldn’t be surprised, but appeared to be. After track grooming between the nitro cars and Pro Stock, the first three pair made their way down the racetrack. Unlike their more powerful brethren, that race to 1000 feet, the Pro Stock cars didn’t make it through their quarter-mile exercises.

Shane Gray’s victory in his Chevrolet Camaro at 6.91, but Richie Stevens’ gyrating Camaro in the left lane should have sounded the alarm. Officials did a bit of track prep before resuming. Jeg Coughlin (Dodge Dart) won the second bout (also in the right lane) while Greg Anderson clearly struggled from the left lane. Jason Line then won over Chris McGaha - again from the right lane and proclaimed, “My mom told me not to say anything if you couldn’t say something nice.”

Then came the catastrophe as Dodge drivers Allen Johnson (the 2012 champion) and veteran V Gaines lined up in the right and left lanes respectively. AJ’s car started moving around at the 60-foot mark , crossing the center line and being disqualified, while Gaines’ Dart was steady until the eighth-mile post, when it began to gyrate and flip. Yes, flip.

Thankfully NHRA’s Safety Safari arrived to aid Gaines about the same time as Johnson’s slowing car - about 15 seconds after he stopped. The Denver-area racer said he had no way to catch the car as it went out of control and he was simply a passenger. He was taken to the care center and promptly released, to be seen with cigar in hand putting his written-off racecar back into the trailer in pieces.

As NHRA began to figure out what to do, once again working on the track that saw some cut tires in the nitro rounds, the answer they needed came from the skies. The track wasn’t safe enough to run on and the other two lanes at zMAX hadn’t been prepped so they weren’t an option. With rain moving in, the organization dodged a big, big bullet.

The balance of the Carolina Nationals takes place on Friday-Saturday during qualifying for the second race in the Countdown to the Championship. Spectators learned on Tuesday that zMAX Dragway will give them 100% credit toward either of next year’s NHRA races, the right thing to do. And the problem for Pro Stock continues.

Although I wasn’t there to witness this, watching the live streaming from home, I have a fairly good idea of what’s going on. In their zest to save money, NHRA isn’t making a lot of adjustments to Pro Stock, thinking that competitors don’t have the funding to adapt to changes. That’s why electronic fuel injection (EFI) - used nearly everywhere else in the Pro drag racing world - isn’t permitted in Pro Stock. The cars raced here: Dodge Dart, Chevrolet Camaro and Ford Mustang would look more like the stock cars without the bulbous nose needed for carburetor.

The problem with Pro Stock

This isn’t the first time this year NHRA has had problems with Pro Stock - there were difficulties at Brainerd in August, as well. The series used the rain gambit to cancel all class competition in Charlotte and Graham Light, VP of operations told competitionplus.com that the real problem was weepers (water coming up from beneath the surface) and some “chipping on he racing surface over the course of the weekend.”

I remember seeing Pro Stock cars get out of control at Phoenix in February 2013 with cars flipping at that race as well. Drivers were ready to mutiny and had their competition completed at the succeeding race in Gainesville. Had NHRA not called the Carolina Nationals yesterday, they would have faced another mutiny from the Pro Stock crowd, who’d already decided they had no intention of tackling this track in its current state. They feared for their safety at over 200 mph.

Time to rethink the class altogether?

NHRA has asked the Pro Stock racers to put a wicker bill on their rear wings to aid traction; some have suggested they go to a Top Fuel-style wing.

Maybe it’s time to rethink the class altogether. While regularly over-subscribed for 16-car eliminations, Pro Stock simply doesn’t have the following of the nitro classes - but it should because technical innovation in the category is rampant and ongoing. There are secrets in Pro Stock that nobody will share. Those secrets cost money and there’s plenty being spent right now.

These cars are revving close to 11,000 rpm and in some cases over that. They need to be tamed down to and also need to have EFI to make them relevant to everyone that comes to a drag race. Do you have a carburetor or two on your car? Didn’t think so…

NHRA dodged the Big One (and that’s appropriate since their headquarters are in California earthquake country) in Charlotte this weekend, but it’s a good bet that these problems will crop up again and again and again.

If this organization wants to succeed in the future and if it wants to have a future, the changes must begin with this class - and Pro Stock Motorcycle - and move up from there. The tracks as they are now can’t support the cars - and zMAX is less than a decade old! - and the racing needs to be more relevant to the paying customer, who needs to get a full refund when the track surface isn’t up to the task. Using weather as a placebo yesterday was disgraceful.

The big winner in the NHRA eliminations in Charlotte: The rain