READING, Pa. – Since Labor Day, Mike Neff has seen his Full Throttle points lead dwindle from 215 points to 30 points to 22 points to a measly four points. So, on the eve of this week’s 27th annual Auto-Plus Nationals at Maple Grove Raceway, is the 44-year-old one-time surfer feeling the pressure?

According to Neff, there was more pressure a year ago when, as crew chief, he was saddled with responsibility for returning John Force to Funny Car prominence after a 2009 season in which the drag racing icon failed to reach the final round for the first time in 24 years.

My goal at the beginning of the year was to make the Countdown, so to be in the running here at the end is pretty awesome.

By contrast, even though he is doing double duty as driver AND crew chief on the Castrol GTX® Ford Mustang, this season has been a piece of cake. Not that Neff doesn’t understand that he and his two closest pursuers are separated by a mere seven points.

“I’m not discouraged or worried in any way,” he said of last week’s first round loss at Dallas, Texas. “We have a great team here and our car is running good. There are still four races to go and we just have to stay focused.

"Really, there was a lot more pressure last year with John in the car because everyone wanted to see him do well -- the fans, the sponsors, everybody,” Neff said.

“The only real pressure,” he said, “comes from ourselves because the worst thing would be to do as well as we have and then bomb out here at the end.”

Neff doesn’t expect to “bomb out.” After all, he’s taken his hybrid Mustang to a category-best nine final rounds, won a category-best five times and led the points for all but three races – when teammate Robert Hight was atop the standings.

Last week’s loss to Hagan was, in his estimation, just a hiccup. 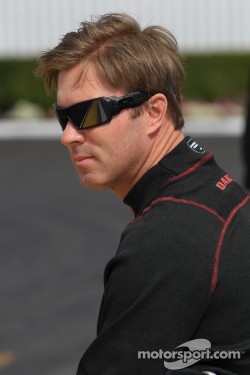 Neff, who won his first NHRA Funny Car championship as crew chief to Gary Scelzi in 2005, is on pace to become just the 26th driver in the modern era to reach the final round of at least half the races in the series. That isn’t what motivates him, though. The championship is his focus as both driver and crew chief.

“My goal at the beginning of the year was to make the Countdown,” Neff said, “so to be in the running (for the championship) here at the end is pretty awesome.”

Although he has earned kudos for his standout performance in two distinctly different jobs, Neff credits his crew.

“You get good people and you delegate,” Neff said. “All these guys are efficient. You can’t do everything by yourself and, if you try, you won’t be effective. You have to trust your people.

“My crew handles everything during the week,” he explained. “Jon Schaffer is my right hand man; he pretty much runs the crew. He oversees all the maintenance, day-to-day. Bernie (Fedderly) is still a big part of it and Danny Hood’s doing a lot of things that (Austin) Coil did, you know, like the fuel data and keeping up with the weather. They’re the ones that make this even possible.”

Robert Hight looks for a win at Reading