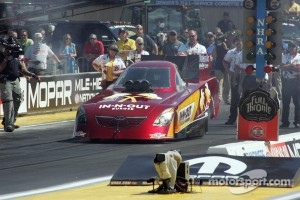 PHOENIX (Oct. 16) – The parts issues that chased Melanie Troxel and the In-N-Out Burger Toyota Funny Car all weekend at the NHRA Arizona Nationals caught up with them once again in Sunday's eliminations.

"Aaron Brooks and John Medlen had it set up to run a low 4.20," Troxel said. "Running this morning we had the best conditions we'd seen all weekend, so we were ready to go after it.

"Unfortunately we've been struggling with a spark plug problem, which was the beginnings of our problems in our run today."

Troxel said the entire team was frustrated because they believed that the win was there for the taking.

"They ran a number we could have beaten," Troxel said. "But we didn't capitalize on it."

With at least one more warm weather track left on the schedule, Troxel said the team is taking heart that once the parts problems are solved, the tune-up itself is in the right range.

"Despite our performance this weekend the tune-up was pretty much right on," Troxel said. "We dropped holes, kicked the belts off, shot spark plugs out of the engine, but we never smoked the tires on any run on a track that was very difficult.

"We went down the track. We went thought the trouble spots and just had a few issues we weren't able to solve."

The In-N-Out Burger team will waste no time getting the problems fixed. Despite a scheduled week off before the Oct. 28-30 Big O Tires NHRA Nationals, the crew is going to drive straight to Las Vegas for a couple of days of testing this week.