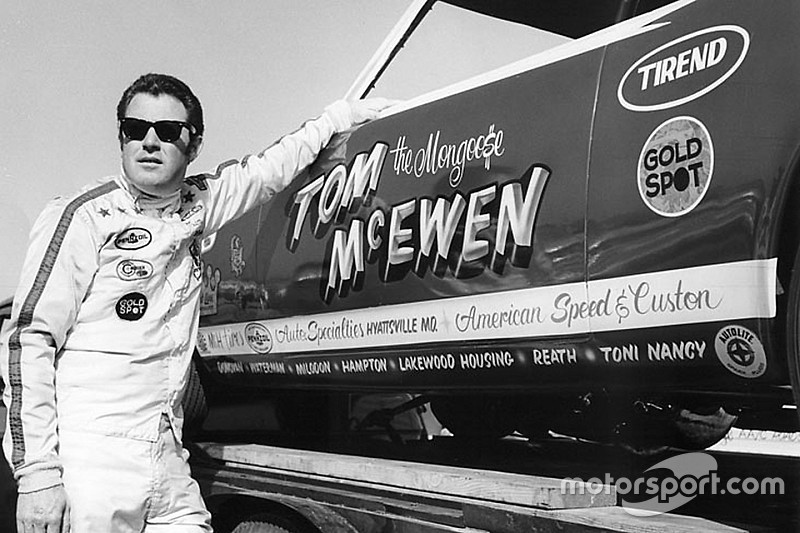 One of the most iconic figures in NHRA history, Tom McEwen, died yesterday aged 81.

McEwen won just five NHRA races yet helped elevate the sport’s status when he came up with the idea of building a rivalry with Don ‘The Snake’ Prudhomme by acquiring the moniker of ‘The Mongoose’. By 1970, the idea had earned the pair sponsorship from Mattel Hot Wheels and they’d become household names to anyone interested in motorsport.

McEwen first began racing in 1953, driving ‘stock’ Oldsmobiles at Santa Ana Dragstrip in Irvine, Calif., and Lions Dragstrip in Long Beach, but he rapidly moved up to dragsters.

One of these was Gene Adams' Albertson Oldsmobile which led to him racing Adams’ ‘Shark car’, a dragster featuring a sexy metallic blue body. In side-profile its tail did indeed resemble that of a shark, and with dragsters of the time running front engines, the ‘tail’ formed the semi-enclosed cockpit for McEwen.

But as well as driving such a striking car, McEwen also said the experience gained with Adams improving his technique. Speaking to NHRA, when in 2001 the series compiled its list of the 50 greatest drivers, McEwen said: "Driving for [Adams] was like going to college for me. I had to learn to drive all over again; to get the feeling of driving without smoking the tires."

In ’63, he scored victory against Art Malone at the Bakersfield March Meet in California. In ’64, McEwen took on Prudhomme, using the Donovan Engineering Special and won in two straight sets.

Lions Dragstrip would be the location of two more match races between Snake and Mongoose in ’65, McEwen’s Yeakel dragster beating Prudhomme two rounds to one in the first, then losing in two straight sets in the second.

Snake and Mongoose raced each other only once in 1966, at the Winternationals, and Prudhomme won, 7.59sec ET to 7.69. Largely due to McEwen confining his activities to drag-racing heartland, Southern California and some other western venues, the pair would not again cross swords until the 70s.

In the mean time, however, McEwen won the ’66 Hot Rod Magazine Championships at Riverside Raceway and the ’68 Stardust National Open in Las Vegas. He also recorded what was then the lowest elapsed time ever over a quarter-mile, 6.64sec at the Orange County PDA Meet in ’68.

McEwen’s understanding of good promotion was also becoming more evident by the late ’60s. Initially, this was for the benefit of the Plymouth brand – the bright red ’65 Hemi ’Cuda came with SoCal Plymouth Dealers Association sponsorship, and McEwen displayed the car up and down the west coast. Two years later, he had the drag racing world whipped into a frenzy about the ‘Super Mustang’ from Ford, even though it would race only once at national level, at the ’67 NHRA Winternationals.

In the summer of ’69, McEwen and Prudhomme joined forces on a business venture, a national touring team sponsored by Mattel Toys, called Wildlife Racing.

"There were no sponsorships back then," said McEwen. "Don had the Wynn's deal, and I had the Gold Spot/Tirend Activity Booster deal, but those were very small when compared to today's standards. I don't remember what Don's money was, but the Tirend deal for me was about $1,000 a year. We depended on cash flow to keep our acts going – match racing four times a week and hoping to keep breakage down.

"I'm guessing, but I'd say it probably took $40,000, maybe $50,000, when I toured in 1969, to keep the whole thing afloat. I remember thinking it sure would be great if somehow we could start off the year with a big deal, then go about match racing and all that."

The Mattel sponsorship, which ran from 1970-72, led to “Snake" and "Mongoose" Hot Wheels toys, and was supplemented by support from Coca-Cola and then Carefree sugarless gum in ’73. The pair had become bona fide motorsport stars just in time to capture the interest of a generation that was about to witness the muscle car street machine era die off due to the oil crisis. And in a way, that was perfect timing: America’s dull domestic streetcar lineups for the next 10 years featured far too many ‘sportscars’ that were all show and no go, so youthful and middle-aged race fans had to live their horsepower-fueled fantasies through NHRA action.

McEwen was brutally honest when comparing himself to Prudhomme, who eventually retired with 14 Top Fuel wins and 35 Funny Car victories.

"I was the [BS-er] and Prudhomme was the racer," McEwen told NHRA. "I'd set up the deals, then we'd go out to the track, and he'd usually beat me. There were times when he was beating me so regularly that the only way I could have beaten him was if he got lost on the way to the track…

"We were a good team; we complemented each other. Don was the serious guy, spent a lot of time with his car, and I was more like the wrestlers today – saying how bad I was going to beat him, to build interest in the deal."

Yet McEwen did not need to be modest about his achievements. In 1972, he won his first major event in Bakersfield’s March Meet and in ’73 he scored his first NHRA national event victory in the SuperNationals at Ontario Motor Speedway.

McEwen also won one of the most famous races in NHRA history, attending only after heavy persuasion from his old partner and sparring partner Prudhomme. The 1978 US Nationals in Indianapolis was held less than two weeks after McEwen had lost his 14-year-old son Jamie to leukemia, and when the pair met in the Finals, the Mongoose beat the Snake in an emotional triumph. It’s a storyline captured well in the 2013 movie Snake & Mongoose.

Glen Cromwell, president of NHRA, today said of McEwen’s death: “We are all saddened to learn the news of Mongoose’s passing. He was truly one of the most brilliant pioneers of NHRA Championship Drag Racing and continued to support the sport through a number of initiatives including our current NHRA Legends Tour in which he played an instrumental role.

“Everyone at NHRA will miss him deeply. Our thoughts, prayers and deepest condolences are with the McEwen family at this difficult time.”