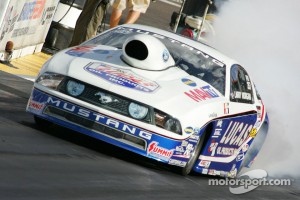 Rain is in the forecast for Saturday, meaning Pro Stock teams could get only Friday's two sessions in instead of the normal four qualifying attempts.

"You get real nervous," Morgan said. "You try to make a real conservative call. That's what we did that time."

And if it doesn't rain, temperatures will plummet 15 degrees. So Morgan made sure his Lucas Oil Mustang made it down the track in the first session Friday.

"It's real important, knowing what the weather's going to do," Morgan said. "It's going to change 15 degrees tomorrow. There won't be a car in today, if we get to make runs tomorrow, that stays – not one car. Well, maybe Mike Edwards and the Summit guys.

"It's real important. We did make a pretty good run in the first session, so we're pretty happy with that."

Morgan hopes to continue the momentum the Lucas Oil team has had in the last couple of races. He qualified seventh at Charlotte and won a first-round matchup over Mike Edwards in Dallas.

"I think we've progressed well," Morgan said. "We missed the clutch at Indy and broke valve springs every run there. We did have some issues there, but we've since fixed all that. We're moving forward. We've just got to keep that momentum going."

J. Force, Dixon, Johnson and Krawiec power to No. 1 qualifiers in Denver