Set in his ways, he’s still a Force for change 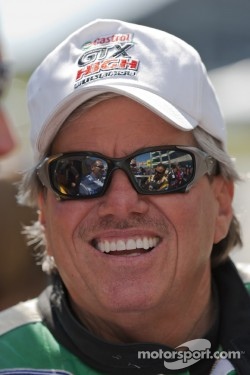 John Force smiles for the cameras

READING, Pa. – He’s had the same leather briefcase for almost 20 years. He still pulls phone numbers from a tattered black book full of strikeouts and write-overs. His personal vehicles always are white in color and his phone is just a phone – no cameras, no recorders, no programmed numbers, no special apps. He doesn’t own a PC or an IPad. He doesn’t tweet or “friend” or text or email.

And, yet, in an extreme sport like NHRA drag racing, where technology reigns and change is as important as nitromethane fuel, John Force, at age 62, still is the king.

The reigning and 15-time NHRA Funny Car champion, Force returns this week to Maple Grove Raceway with an 8,000 horsepower Castrol GTX® HIGH MILEAGE™ Ford Mustang that looks not at all unlike the car in which he won six races a year ago.

In Force’s case, though, looks can be deceiving.

The Mustang he’ll drive in this week’s 27th annual Auto-Plus Nationals may bear the same, distinctive green-and-white paint of the past, but beneath the surface it’s only a distant cousin to the Ford in which the racing icon last year became the oldest champion in any major racing discipline.

After winning the 2010 title in a “house car,” the first rolling chassis built in the John Force Racing facility in Brownsburg, Ind., he’s back this year in a Murf McKinney version of the three-rail chassis his team championed following the 2007 death of team driver and rising star Eric Medlen.

He also has different crew chiefs with Dean “Guido” Antonelli and Ron Douglas checking in for Mike Neff and Bernie Fedderly and an entirely different crew, one that last year toiled in support of his daughter, Ashley Force Hood.

The only thing that’s not different, outside of the paint, is his commitment to Funny Car success. Although he’s won just one race this season himself (at Denver, Colo.), Force remains focused on his team’s bid to win its 18th title in 22 seasons.

Mike Neff currently leads the points in the Castrol GTX Mustang and while Force is not among the current leaders, he still expects to play a role in deciding the championship.

“I’ve still got a lot of fight in me,” said the 2008 inductee into the Motorsports Hall of Fame of America. “I know we’ve struggled this year, but this is still a fast hot rod. We qualified No. 1 five times. That’s more than when we won (the championship). We just haven’t been able to go back-to-back-to-back and, as tough as Funny Car is this year, you have to be able to do that. There are no easy rounds. Anybody can take you out at any time.”

While he may not embrace change elsewhere, Force never has been resistant to doing anything necessary to succeed in drag racing.

“Change may not be working for Obama,” he has said, “but it’s been good for John Force.”

Consider that one year after putting together the most dominating season in history (1996), one in which he drove a Pontiac Funny Car to 16 final rounds, 13 tour victories and the championship, Force switched to Ford Mustangs in March of the following year after a dispute with GM.

Also, after winning his first 100 races in Steve Plueger-built cars, Force switched to McKinney Race Cars in 2003 when Plueger was unwilling to provide chassis in the large numbers required of his growing multi-car team.

Furthermore, after racing for 30 years with powerplants derived from the original Chrysler hemi design, Force in 2007 commissioned John Medlen, with assistance from Ford engineers, to design a Ford BOSS 500 engine. That new motor debuted in 2008 in a car driven by Neff and last year it powered Force to the title.

Finally, after 25 years with Austin Coil as his primary crew chief, Force moved Neff into that slot in 2010 and, after failing to reach the final round even once in 2009, won six times and rallied to beat Matt Hagan on the final day of season for the championship. Now, he’s trying to work some more magic with Antonelli and Douglas.

“This fight has only started,” Force said of the Countdown, “and there’s nothing I like better than a good fight.” Unless it’s a big change.