NHRA heads to Sonoma for second stop of Western swing 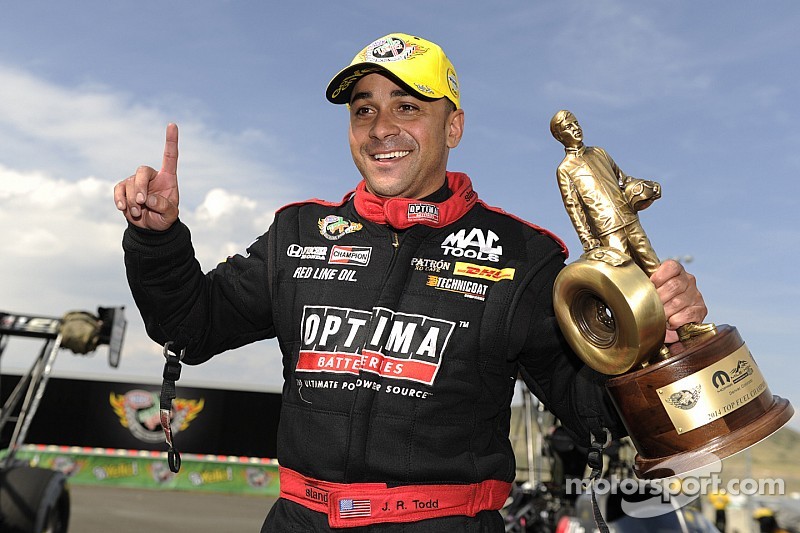 NHRA Funny Car points leader Robert Hight heads into Sonoma Raceway on a roll as the series returns for the 27th NHRA Sonoma Nationals this weekend.

The event marks the second stop on the NHRA’s famed Western Swing, which kicked off last weekend at Bandimere Speedway in Denver.  Hight, J.R. Todd (Top Fuel, in photo), Allen Johnson (Pro Stock) and Andrew Hines (Pro Stock Motorcycle) claimed victories in Denver on Sunday and will look for their chance to sweep the three-race Western Swing.

Hight, who posted a victory in Sonoma in 2008, defeated team owner John Force for his fifth win of the season and 34th of his career in Denver. Hight raced to six consecutive final round appearances early in the season, but hadn’t made it to the finals in the past six events. Hight holds a commanding 181-point lead over Force in the point standings (1179 to 998). Three-time and defending Sonoma winner Ron Capps sits third in points.

"This car and this whole team is perfection. That's what we're all about and we want to show it,” said Hight. “We came out with a brand new car in Denver. Usually new cars drive me crazy because everything in them is different. But, my guys are so good, if they hadn't told me, I wouldn't have known it was a new car."

These things are hard to come by whether you are full time or part time.

In Top Fuel, Todd earned his first win of the season and first since 2008. It marked the second win at Bandimere Speedway for Todd, who claimed his first career NHRA Mello Yello Drag Racing Series win at the facility in 2006. Todd also earned his only Sonoma victory in 2006.

“These things are hard to come by whether you are full time or part time,” said Todd, who returned to racing full time earlier this year at Gainesville (Fla.). “I knew at the time I got the opportunity to drive for the Kalitta group it was probably the best opportunity I was ever going to have to win one of these things.”

The Top Fuel points battle is tight headed into Sonoma Raceway, as Todd’s teammate Doug Kalitta leads Antron Brown by just 25 points (1162 to 1137). Brown has posted a class-leading five victories so far this season. He posted back-to-back victories in Sonoma in 2011 and 2012.

In Pro Stock, Johnson continued his mastery on the mountain as he defeated his teammate Jeg Coughlin for his fourth win of the season. His four wins ties Erica Enders-Stevens for the most wins in the category thus far this season. Enders-Stevens leads Johnson in the Pro Stock point standings by 184 points (1229 to 1045), but she is not slated to compete in Sonoma or Seattle.

Action gets under way in Sonoma on Friday with two rounds of pro qualifying at 4:15 p.m. and 6:15 p.m. Final qualifying takes place on Saturday (12:55 p.m. and 3:20 p.m.), with final eliminations set for Sunday at 11 a.m. (all times Pacific). The weekend will also feature the race-within-a-race MiraMonte Pro Bike Battle on Saturday.

Who will emerge victorious as the NHRA heads to Sonoma, California?