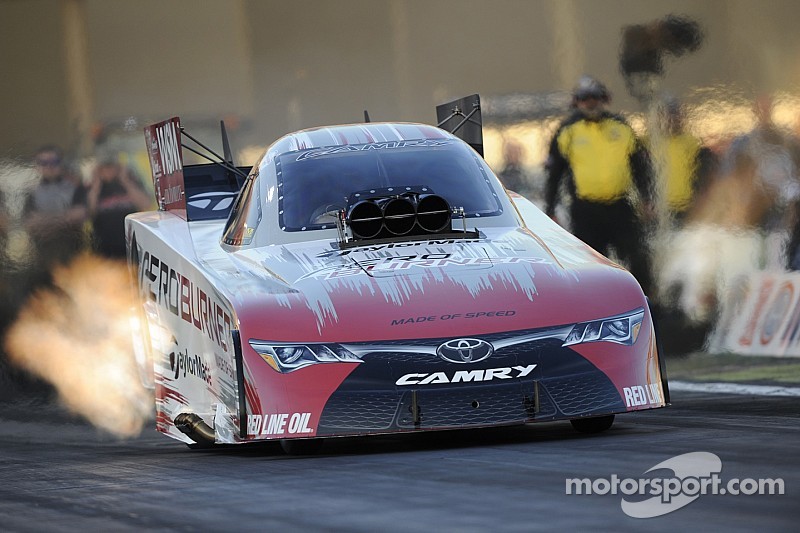 News and notes from Friday's action at Pomona with Motorsport.com's Anne Proffit.

The NHRA got down to business the first Friday in February as qualifying began for the 53rd annual Circle K Winternationals on Auto Club Raceway at Pomona’s historic drag strip. After a winter of changes in all three attending Mello Yello Drag Racing Series categories, there were some loose ends to tidy up in terms of personnel, partnerships and series regulations.

A couple of hours before competition began on the race track, Alan Johnson came to the press room to discuss his current situation. Johnson, of nearby Santa Maria left Don Schumacher Racing to take on team management duties for Al-Anabi Racing seven years ago; the result of that six-year venture was three Top Fuel championships (Larry Dixon, Del Worsham and Shawn Langdon) in what was originally intended to be a five-year deal.

The government of Qatar re-upped with Alan Johnson Racing (AJR) before the 2014 NHRA season for an additional five years but abruptly cancelled that agreement at the close of the calendar year, leaving Johnson and his team with no financial backing. While this was a surprise to Johnson, owner of Alan Johnson Performance Engineering (AJPE) that supplies blocks, heads and intake manifolds to his competitors and whole engines to Lucas Oil Sportsman entrants, he is trying to press on with a single car for Langdon. The Californian’s teammate Khalid alBalooshi is no longer with the team.

“We had six great years and nothing lasts forever,” Johnson said Friday. “It’s only been 31 days since we heard about this and, quite frankly, I can’t explain Qatar’s rationale. There has been interest” in the AJR program that boasts two championship tuners and the 2013 Top Fuel champion driver and, in fact, the team’s single black car sports the name of chef/entrepreneur Guy Fieri’s Knuckle Sandwich enterprise, with Fieri supposed to be in attendance on Saturday.

Johnson intends to run this race and the second round at Phoenix in two weeks; if no backing appears - and we all know it’s very late in the game to be talking 2015 - then Johnson will pull back his program until he has proper financing, leaving some exceptional crew members without work. the graveyard joke of the day was that AJPE now stands for “Alan Johnson Pays for Everything.”

New sponsorships for other teams

There was better news in the Dote Racing pits as the team announced added associate sponsorship from Talking Rain Beverage Co.’s Sparkling ICE, a zero-calorie sparkling water-based drink, for the entire season and primary backing for the Maple Grove round next fall. Driver Leah Pritchett promptly went out, did two A to B passes down the 1,000-foot drag strip and ended up eighth for the day at 3.797 seconds at 320.81 mph. Leader Doug Kalitta’s best lap in the second session was 3.733/327.59.

Not so quick for Pro Stock driver turned Top Fuel pilot Dave Connolly, who failed to make it down the track in his first two attempts. Neither one of his passes were complete and the Bob Vandergriff Racing team led by Kurt Elliott will have to regroup to make the field as there are 17 cars on-site and only 16 qualify for Sunday’s eliminations.

Prior to the start of the season, NHRA announced increased penalties for oil-downs that slow the action and lessen the entertainment value for fans. On Friday they announced awards for teams that don’t cause those stoppages. While the second Funny Car session took an hour to transpire, there were only two oil-downs during that slow session, one car crossing the center stripe (John Force!) and a multitude of other problems. Hopefully the action will flow better on Saturday and Sunday?

Don Schumacher Racing also had a major announcement on Friday, making known that the Infinite Hero Foundation, through patroness Terry Chandler will be on the side of the new 2015 Dodge Charger R/T driven by 2012 category champion Jack Beckman. As with Chandler’s support for DSR teammate - and fastest Funny Car on Friday - Tommy Johnson Jr.’s Make-A-Wish Dodge, there’s no expense to the Foundation and all proceeds go directly to helping veteran military personnel with severe physical and mental difficulties.

The Infinite Hero Foundation is backed financially by Oakley, who cover the Foundation’s operating costs and whose protective eyewear is regularly dispensed free of charge to military and to survivors of difficulties like the miners stuck below-ground several years ago. Sales of Infinite Hero Foundation coins that Beckman carried with him in competition last year during the six-race sponsorship that preceded this full-year commitment by Chandler amounted to $70,000 ($100+ for each), nearly half of the more than $150,000 raised in 2014 through the drag racing sponsorship.

Goodyear came in with a new Pro Stock rear tire for the 2015 season, replacing the 10-year-old D2200 with a D2211 that uses newer materials and also has less break-in time. Pro Stock combatants have had to break in their rear tires prior to getting to the race track by doing burnouts with a designated car at their shops or during test sessions, an added expense in the already monumentally expensive manufacturer category.

More speed for a new tire

Manufactured in the company’s Akron, OH facility, the D2211 was developed with the goal of giving teams a relatively similar tire to the one they were accustomed to. “They seem to be fairly close (to the D2200) and break in a lot quicker, that’s for sure. They seem to have a little bit more,” said Adam Hornberger, Johnson & Johnson Racing crew chief. Friday’s fastest qualifier, Jason Line chimed in: “the tires are great. There’s lots of bite.”

Although the Winternationals has often had “iffy” weather - storms have a tendency to gravitate to Pomona’s foothills - Friday’s weather was delightful and Saturday’s looks to be the same, even a bit cooler, which should aid elapsed times and speeds. The always-quick Doug Kalitta led the Top Fuel standings after the first two rounds, Johnson Jr was on top for the 18-car Funny Car field and two-time champion Jason Line led the 17-car Pro Stock contingent.