NHRA ends 2014 with a couple of nail-biting final rounds 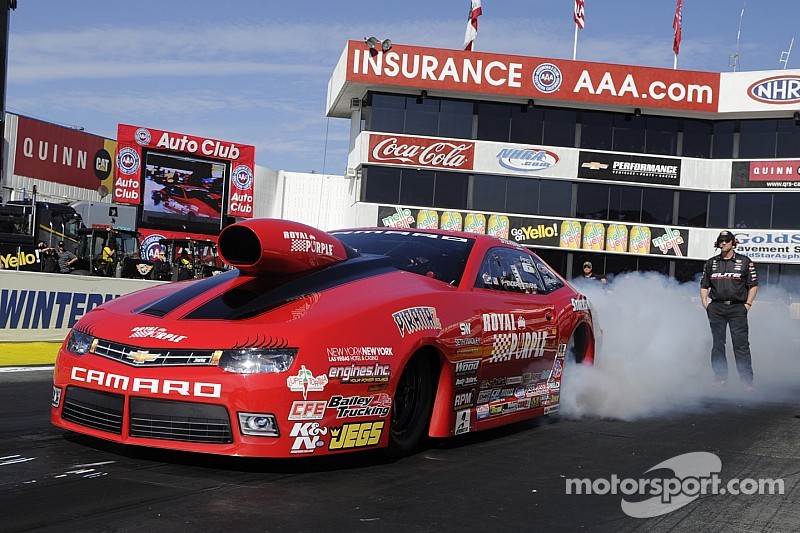 Matt Hagan and Erica Enders-Stevens triumph for the event and the season title.

The National Hot Rod Association ended its season in spectacular fashion this past weekend by celebrating the 50th annual Auto Club World Finals at Auto Club Raceway in Pomona, Calif. While two of the champions were crowned before the last of final eliminations were completed - Tony Schumacher secured his eighth Top Fuel title on Saturday night and Andrew Hines became a four-time Pro Stock Motorcycle champion after Sunday’s first round, the other two competitions either went to the semifinal or final rounds.

It was an excruciating wait for both Matt Hagan (Funny Car) and Erica Enders-Stevens in Pro Stock.

Hagan had to deal with legendary 16-time Funny Car champion John Force, looking to earn back-to-back titles, something he hasn’t done in this decade. Hagan prevailed in a semifinal victory over teammate and top qualifier Tommy Johnson Jr., earning his second championship while taking what NHRA calls “little points” for top-three qualifying in the four sessions on Friday and Saturday. Force earned two points in initial qualifying on Friday afternoon and Hagan took four over the four sessions, so Force still needed to win each round and take a national record to beat the Virginia cattle rancher, who came into the final race with a 21-point lead - or more than one round.

The duo lined up on opposite sides of the eliminations ladder and met in the final round and the event Wally went to Hagan for a second consecutive year. In 2013, that win was a salve for losing the title to Force; this year his victory was a punctuation point for Hagan, whose tuner Dickie Venables hadn’t been with the team for the final couple of races due to illness. Hagan drove his bright blue and yellow Mopar Dodge Charger R/T to a close 4.076/310.77 win over Force’s 4.086/276.58 as the veteran smoked his tires in desperation to take the victory.

It was a similar bout in Pro Stock, where Jason Line came into the season-closer 17 points behind Enders-Stevens. After the little points were added in, Summit Racing’s Line had - despite earning the No. 1 qualifying position - 19 points to make up. This duo were on opposite sides of the ladder, too, which enabled them to meet in the final round and decide their title. Both left too soon and fouled, but Enders-Stevens’ -.002 reaction time was closer to the perfect .000-second RT she turned in her semifinal bout against Jonathan Gray (which Gray did as well - no doubt a first for NHRA’s professional categories). Line left way early at -.011.

Enders-Stevens’ victory led a Chevrolet Camaro march to a manufacturers’ title as well and it was her Elite Motorsports team, led by father-son duo Rick and Rickie Jones (last year’s Pomona race winner from the driver’s seat) that enabled the 31-year-old Texan to turn times in the 6.4-second range throughout eliminations.

She might not have won the qualifying battle but she won the elimination war and, with it the distinction of being the first woman to win a Pro Stock title. She was the first woman to win in the category (no other female has won in Pro Stock yet) and her six wins on the year - after contesting 22 of 24 events - easily beat Line (4) and her good friend Allen Johnson, the 2012 champion who won five times this year but finished the season in sixth place. Her margin of victory over Line was a scant 39 points.

Enders-Stevens joins the great Shirley Muldowney of Top Fuel fame and Pro Stock Motorcycle’s Angelle Sampey as the only women to have won NHRA’s season-long championships. The latter two have each secured three titles each and, if the karma gods are on her side, there’s no reason why Enders-Stevens can’t join them in that privileged category as well.

Although Tony Schumacher had his eighth title wrapped up after qualifying, he still drove through to the finals before being aced by part-timer Morgan Lucas, who brought his son to the podium after taking an emotional victory. Because Lucas didn’t race full-time in 2014, he wasn’t eligible for the Countdown to the Championship six-race playoffs, but his hired shoe, rookie Richie Crampton won twice in the Geico dragster - at Englishtown and at the 60th annual Chevrolet Performance U.S. Nationals - and took home the Auto Club Road to the Future prize.

The Top Fuel category was won by consistency. Sure, Schumacher had five victories but teammate Antron Brown, the 2012 titleholder had six! And still finished seventh on the year. It was consistency by JR Todd that allowed him to finish second with a single win for Kalitta Motorsports, while Schumacher’s teammate Spencer Massey took third. The margin from first to third for the year was a meager 64 points or just over three rounds of racing.

Vance & Hines were going to win Pro Stock no matter what as Andrew Hines and Eddie Krawiec owned 11 wins between them coming to Pomona. Hines was the leader at the start of the weekend and the championship winner at the end of it, but it’s been five long years for Hines, who achieved his fourth Pro Stock Motorcycle championship - beating brother Matt Hines, who has three. There was some banter about that, Andrew joking that he didn’t want the fourth over his brother but in the end there was no stopping the Screamin’ Eagle Harley-Davidson motorcycles. Even H-D’s Willie Davidson arrived for the weekend to see this monumental achievement, coming after a moribund 2013 season as the V&H team came to grips with a pushrod-based engine after using DOHC engines for Krawiec’s titles until the close of 2012.

Andrew Hines is a gracious champion and is highly involved with the research and development of his and Krawiec’s competition motorcycles. He was especially overjoyed to have his young son here for the World Finals and to have the youngster on stage with him Monday night for NHRA’s spectacular banquet.

Now the NHRA Mello Yello Drag Racing Series season is complete and it’s time to rest. Or is it? Even though Don Schumacher Racing (DSR) claimed its third dual titles this year after Tony Schumacher and Gary Scelzi won in their respective classes in 2005, Antron Brown and Jack Beckman brought home the championships for Top Fuel and Funny Car in 2012 and Schumacher/Hagan prevailed this year, there will be little downtime before they begin preparations for the 2015 campaign. The entire DSR team has the Thanksgiving weekend off to recoup but three of their cars, two Funny Cars and one Top Fuel rail, start their testing regimen at West Palm Beach the first week of December.

I guess it’s true there’s no rest for the wicked?

John Force: 'This isn't the end, it's just the beginning'

Troy Coughlin hopes for a hat trick in Las Vegas