NHRA closes out season at Pomona with championships on the line 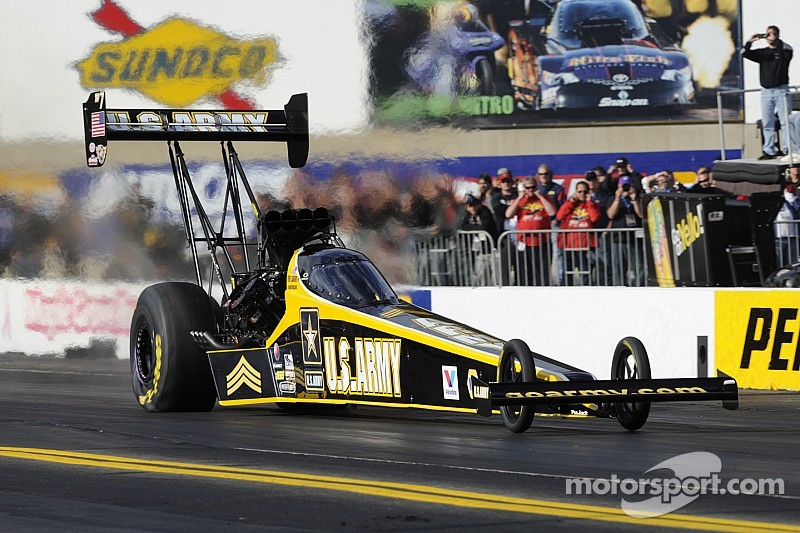 Funny car points battle will be decided between Force and Hagan.

The National Hot Rod Association (NHRA) is celebrating a lot of memorable anniversaries this year. Over the Labor Day weekend the series held its 60th annual Chevrolet Performance U.S. Nationals at Lucas Oil Raceway outside Indianapolis. That was a five-day celebration, bringing out many legends of the sport and culminating with some exceptional racing at all levels.

As is customary, championships in each of the four categories are going to the final contest. Sure, that didn’t happen last year when John Force wrapped up his 16th Funny Car title in the penultimate race at Las Vegas, but this year there are “mathematical” opportunities in Top Fuel, Funny Car, Pro Stock and Pro Stock Motorcycle.

Tony Schumacher is en route to an historic eighth Top Fuel title with five wins under his belt after 23 races this year. There are six drivers with possible opportunities to stop that pile-driver from occurring: Spencer Massey, who won at Las Vegas last weekend for his third victory of the year, single race winner JR Todd (who was runner-up at Vegas), 2013 champ Shawn Langdon (1 win), double race-winner Doug Kalitta and Steve Torrence.

Schumacher needs to win a round - something he didn’t do last weekend - to take his title and he’s got the bit between his teeth. He’s got a 109-point lead on Massey, which is more than five rounds, but the racing Gods have either been kind to him (those five wins) or dismal this year. Schumacher has won three of his five Wally trophies during the six-race Countdown to the Championship; he just hasn’t been able to close the deal - and could have at Las Vegas, had he not fallen to Billy Torrence in the crucial first round there.

The only way to stop Schumacher before Sunday is to make sure he doesn’t qualify for the race and that would be unthinkable for such a robust Don Schumacher Racing Army team.

Matt Hagan is the current leader in Funny Car but he has that old man, Force (65) nipping at his heels. Hagan won in Las Vegas and this duo have three victories apiece. Force’s first of the year came at Pomona and now he lies just 21 points behind Hagan. The legend is known for making life difficult for his competitors - with both his car and his mouth. In NHRA he is The Intimidator and it’s tough not to be impressed by Force’s drive and desire - after all these years.

The other Force could be a factor

Hagan has to worry about another Force as John’s daughter Courtney lies third in the points and owns four wins on the year - two of them in the Countdown. Sure she’s 121 points back but anything is possible in this form of racing. Tommy Johnson Jr. (1 victory) and Robert Hight (John Force’s son-in-law and Courtney’s brother-in-law) has five victories and is still mathematically eligible to add a second title to his 2009 championship.

Matt Hagan won at the Auto Club Finals last year but the title was already decided. In fact, this battle between Hagan and John Force is one that’s been ongoing since 2010, when Hagan bowed to the veteran’s 15th championship, beating him the following year. Neither was a factor in 2012 when Jack Beckman earned the title but they went back to sparring in 2013. This should be quite the matchup and lots of fun for everyone on-hand and watching on television.

Maybe I was wrong earlier this year when I said that Erica Enders-Stevens, the first woman to win a Pro Stock race was throwing her pending championship away by missing two mid-season races? She’s been on fire as the season comes to a close and pretty much owns that Las Vegas racetrack. Last weekend she was top qualifier and won the race - just as she did in the spring where she also took the K&N Challenge for the class. With five wins on the season - just like her good friend Allen Johnson, who’s mired in a tie with reigning champ Jeg Coughlin for fifth place points - Enders-Stevens looks tough to beat at Pomona. Her crew chief, Rickie Jones took the same Elite Motorsports Camaro to the win at Pomona last fall before hanging up his helmet to wrench.

Erica’s got to watch out for Johnson and Coughlin, obviously, who are 144 points behind her, but she also has two-time champion Jason Line just 17 points behind in second place and former teammate Dave Connolly, who moves to Top Fuel next season. He is 84 points in arrears. Shane Gray is the only other driver eligible for this title and he’s 111 points back - but has been very, very fast and consistent this year.

Handicapping Pro Stock Motorcycle is the easiest of all as there are only two riders with an opportunity to take the title. Both Vance & Hines Screamin’ Eagle Harley-Davidson riders Andrew Hines and Eddie Krawiec are fighting to bring home a fourth championship this weekend, with Hines up 92 points on the New Jersey-born Krawiec. Hines has six victories to Krawiec’s five and the only riders with wins this year (one each) are Hector Arana Jr (currently 4th), Steve Johnson (5th), Angie Smith (9th) and Jerry Savoie, who wasn’t eligible for the Countdown in 2014.

Right now the weather looks perfect for weekend racing with partly cloudy to clear skies and temperatures ranging from the low-to-mid-to-high 70s each day. Engines will like this weather, drivers and riders should as well and it’s perfect viewing temperatures for the multitude of fans that are bound to come out to celebrate 50 years of championship deciders in Pomona, Calif.