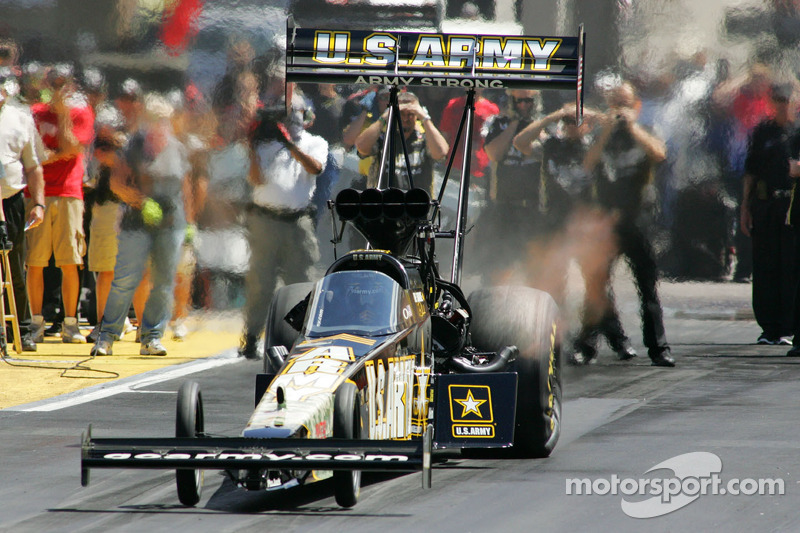 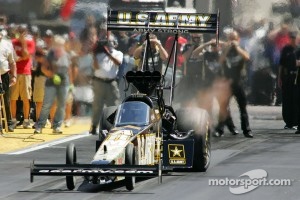 With his round win over Brown, Massey took over the top spot in the standings as the NHRA Full Throttle Drag Racing Series now travels to Maple Grove Raceway in Reading, Pa. next weekend for the Auto-Plus NHRA Nationals.

"We were trucking right along today until meeting up with Spencer," said Brown, who had won three straight races coming into the Dallas-area event. "It's a little disappointing to be knocked out of the points lead (into second-place), but we still have plenty of racing left to try and get back up there. We're definitely going to remain Army Strong."

Schumacher initially took care of Scott Palmer in the opening round of final eliminations, but his dragster lost traction against Vandergriff in round two and his day was immediately over.

"Yet again, we had a good race car this weekend," said Schumacher. "I'm not sure why we smoked the tires against Vandergriff, but clearly the track was very hot and tricky (more than 120 degrees). I guess we just had too much power loaded up for that run."

Schumacher, who remained winless for the season and is still fifth in the standings, will now hope his past success in the Keystone State will spill over into next Sunday. He leads the Top Fuel class with four career wins at "The Grove."

"We have done well there over the years," he offered. "Of course, the past is the past. We have to deal with what's happening right now. We need to get ourselves moving forward and quickly."

After the stop in Pennsylvania, the NHRA tour will take a weekend off before finishing the season with visits to Phoenix, Las Vegas and Pomona, Calif. Those three races also mark the second-half of the six-race Countdown to the Championship.

"Like I said, there are a lot of rounds left on the table for all of us to grab," said Brown. "We'll go home briefly this week to regroup and then get prepared to let it fly in Reading."