BRISTOL, TN --- The first day of the 12th annual Ford NHRA Thunder Valley National presented by the Tri-Cities Ford Dealers was a banner day for the Blue Ovals on the track. When qualifying concluded Bob Tasca III was in the top spot, nine thousandths, quicker than Mike Neff and the Castrol GTX Ford Mustang. Neff opened the second qualifying session with a blistering 4.072 second pass and Tasca closed it out in the next to last pair with a 4.063 second run for the provisional top spot. 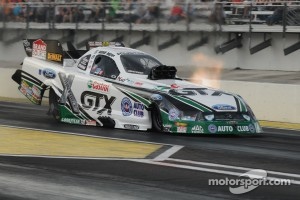 At the top end of Bristol Dragway Neff was pleased with his performance numbers but he also knew there were a number of Funny Cars that might be able to race around him.

“That was a really good run. The track cooled off about 20 degrees from the first session. Robert Hight made a really good run in the first session. I knew the track would be good. I think you will see a better run than that. You just have to go up and race the conditions. Sometimes trying to play conservative and get you in as much trouble as being aggressive. We are just happy to make a good one,” said Neff, the driver and crew chief of the Castrol GTX Ford Mustang.

Robert Hight was the quickest Funny Car in the opening qualifying session with a 4.124 second pass and he picked up three valuable qualifying bonus points. He was fired up at the top end as he exited his Elvis/AAA Insurance Ford Mustang.

“That was a great way to start the race. You want to get a good run so you can run at the back of the pack. Good job Jimmy Prock and Auto Club,” said Hight, the defending Ford NHRA Thunder Valley Nationals champion.

In the second session Hight was in the last pair with rookie of the year candidate Alexis DeJoria. Hight made a strong move off the starting line but just before the 1/8th mile marker his BOSS 500 engine let go, popping the burst panel and slowing his Ford Mustang Funny Car to a pedestrian 6.703 seconds at 75.53 mph.

Before Hight had a chance to close out the session team leader John Force continued to impress with a 4.094 second pass at a whopping 312.71 mph. Force’s time was good enough for the provisional No. 5 spot and it continues his team’s steady improvement. It has been a team effort and Force was pleased to see his crew chief tandem taking some chances when conditions were optimal.

“We have been addressing this tune up and John Medlen has been working with (crew chiefs) Dean Antonelli and Danny DeGennaro. It is just coming together and we are glad to be in the top half instead of sneaking into the show. We don’t like getting picked off in the first round. Guido and the boys started leaning on it. It is running good. Courtney (Force) would have run good but it dropped a cylinder. We are starting to get for good race cars,” said Force.

Prior to the first round of qualifying Force and Hight unveiled their Elvis themed Funny Cars and the Bristol crowd loved the looks of both Ford Mustangs. This was the third Elvis tribute Funny Car for the winningest driver in NHRA history and he is hoping “The King” will bring him some good luck in Bristol.

“It was fun to run a couple Elvis cars. The Mustang doesn’t know what body is on top of the BOSS 500 but the fans love seeing Elvis on this hound dog. It was fun to unveil it on the starting line with Lionel NASCAR folks. I have never won a race with an Elvis Funny Car and I want to change that this weekend.”

The most consistent Funny Car of John Force Racing was the Traxxas Ford Mustang piloted by the Automobile Club of Southern California Road to the Future candidate Courtney Force. In the first session the youngest racing Force posted a 4.17 second pass and she improved slightly in the second session hanging onto the provisional No. 12 spot going into Saturday with a 4.16 second time.

“The sun was setting so the track was cooling down before my second run. Cooler air and better conditions makes for quicker passes. I improved from my previous run, with a 4.16 at 292mph. We expected the car to run even better on this pass with the good conditions, but it dropped a cylinder and slowed my car to 292 mph, which placed me in the No. 12 spot, going into the rest of qualifying tomorrow,” said Force. “Having a consistent race car and making more and more passes down the track are helping me to become familiar with both of the lanes and the center groove, which will help me get a better grip on driving my Ford Mustang the rest of the weekend.”

Late-round runs are key on Friday at Bristol