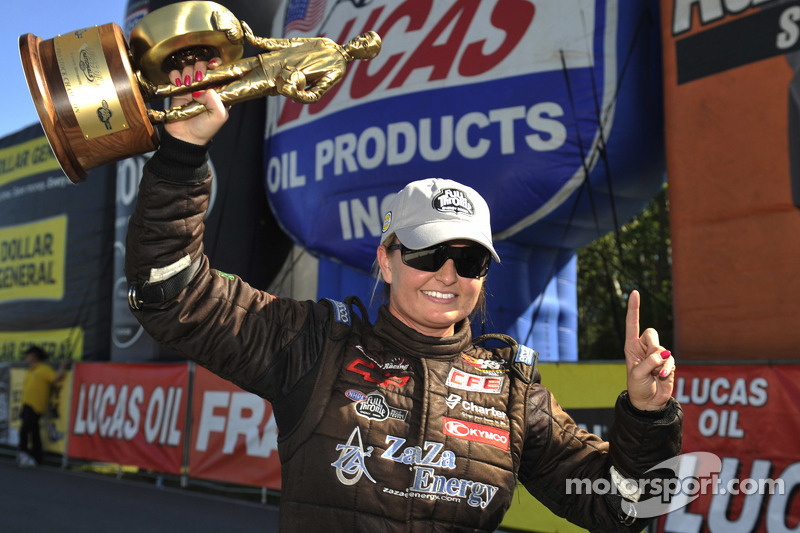 A few weeks ago, I had lunch with Erica Enders-Stevens (in photo), the NHRA Pro Stock driver who took a hometown victory last weekend at the O’Reilly Auto Parts NHRA SpringNationals in Houston. We talked about a lot of things – racing in general, her career in particular, how I had tried once to drive a Pro Stock and found it to be the single hardest, most humbling race car ever – but I am pretty sure there is one thing we didn’t talk about: That she’s a female driver.

In the NHRA, that just doesn’t seem like a big deal.

It’s worth talking about it now, because her win makes 99 pro victories for women drivers in the NHRA. That’s especially impressive since the wins only began in 1976, with Top Fuel driver Shirley Muldowney, a pioneer not only in drag racing but in motorsports in general. Muldowney is responsible for 18 of those 99 wins. Enders-Stevens now has eight victories.

Here, in fact, are the top 10 women drivers per number of victories:

The 100th victory could easily come at the next race, the Summit NHRA Southern Nationals at Atlanta on May 16-18. So far, Brittany Force and Leah Pritchett are entered in Top Fuel; Alexis DeJoria and Courtney Force are entered in Funny Car; Enders-Stevens is entered in Pro Stock, and in Pro Stock Motorcycle, Angie Smith, Elvira Karlsson and Katie Sullivan are on the list. That’s a lot, for two reasons – everybody wants a shot at being number 100, and the Pro Stock Motorcycles only race at select events.

So where does this leave NASCAR? Still looking for its first female winner in one of the three top touring series. And is this a good place to mention that the last and only IndyCar victory for Danica Patrick was six years ago this month? She’s now in NASCAR, of course, and doesn’t appear to be close to a victory there.

And speaking of diversity in general, is this a good place to mention that the winner of the Top Fuel class in Houston was Antron Brown? Who’s black? And that this was his second straight win? And that he was the 2012 champion?

Meanwhile, NASCAR Hall of Fame voters are still struggling to get Wendell Scott into the HOF for his lone victory in NASCAR – in 1963.

In fairness, drag racing has long attracted women and minorities as competitors in a way that no other motorsports series has. Why? Hard to tell. But the bottom line is this: The NHRA is one win away from proving not only that women can get the job done behind the wheel not once, but 100 times.