Mile-high hopes and challenges in Denver 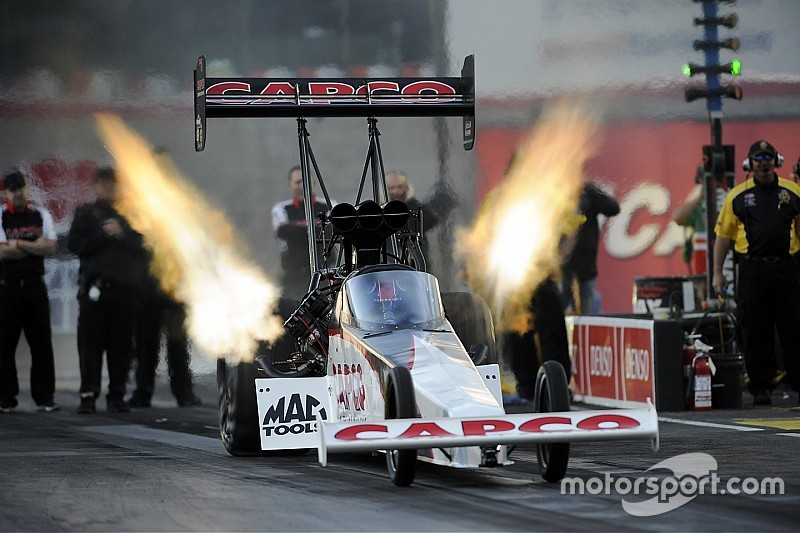 Steve Torrence, seeking No. 1 seed for the Countdown, leads the Top Fuel runners as they seek to get their tune-ups tweaked for the unique challenge of high-altitude Bandimere Speedway. Anne Proffit reports.

Given the choice neither one of these racers would opt for a weekend off, but their crews needed to recharge, the equipment needed a rest - and preparation for another three-races-in-three-weeks stretch, known as the Western Swing. That “swing” begins this weekend with the 38th annual Mopar Mile-High NHRA Nationals at Bandimere Speedway outside Denver. This track is an anomaly, located in the foothills of the Rocky Mountains. It requires a completely different tune-up – and parts – than any other on the 24-race tour and flummoxes the best of racers.

Heading to Denver is no worries for Torrence, currently in first place in Top Fuel’s standings with six race wins to his credit. After all, Torrence won the race in 2015 and took No. 1 qualifying spot last year on the mountain, which is 5,800 feet above sea level.

Commending co-crew chief Richard Hogan, Torrence noted his team “really hit the nail on the head [at Bandimere] and we’ve been able to do that consistently. It gives you a big boost of confidence and we know what it takes to do well there. We just have to go do it.

“I hope we maintain the consistency we’ve had this year and maintain going rounds and doing well. Momentum is on our side.”

Although Torrence would love to have the broom that signifies sweeping the Western Swing – Denver, Sonoma and Seattle – last won by Antron Brown in 2009, his true mission is to gain his first NHRA Top Fuel championship. The six-race Countdown to the Championship begins after the Chevrolet Performance U.S. Nationals on Labor Day weekend, and Torrence wants those bonus points that come with landing the No. 1 seed.

But first, there’s Denver. “One of the biggest differences this season is Richard’s [Hogan] confidence in himself,” Torrence admitted. “He’s my guy and he makes all the calls. Everyone has been making all the right decisions.”

LE Tonglet, who took the 2010 championship as a rookie, has earned four victories in six contests thus far in PSM’s 16-race championship, so the Louisiana firefighter has his eyes on a second title. When he captured his first, Tonglet was relying on his father Gary and brother GT Tonglet for the build and tune on his Suzuki. This year he’s still got Dad turning the wrenches, but the build and tune come from WAR, where the team has fully developed a clone of Savoie’s championship-winning Suzuki from 2016.

The change has been excellent for father-and-son Tonglets and for Savoie, together with tuner Timothy Kulungian, who has mastered the art of electronic fuel injection on the Suzuki. Only Karen Stoffer, with tuning from husband Gary, uses EFI on a Suzuki motorcycle; the balance of Suzuki continue with carburetors.

Even though he fell to Krawiec in the first race of the year, Tonglet knew already he had a good bike.

“It was just a matter of getting tuned up as we learn more about the bike each week,” he says. “On Sundays our goal is to get win lights, so I’ve improved on being calm and staying focused to try and get the job done.”

Funny Car sees another driver on a roll – reigning title-holder Ron Capps, who has won six races of the season’s 13 races. Capps, a bridesmaid in the class for much of his 20-year career is having the time of his life this season. Crew chief Rahn Tobler secured his 60th win in Joliet, putting the tuner into elite company.

“This has been a season that I could not even dream about, coming off a championship and having that four-win winning streak. It’s been incredible,” said Capps who holds a 200-point advantage over fellow Don Schumacher Racing Dodge Charger R/T driver Matt Hagan, with their teammate Jack Beckman in third.

All but one of the Pro Stock wins this year has fallen to a Chevrolet Camaro runaway this year, with Bo Butner now first in the title race ahead of Summit Racing teammate Greg Anderson and Tanner Gray, while Jeg Coughlin – who hasn’t yet won a race this season – is in a tie for fourth with reigning champion Jason Line.

This weekend, Allen Johnson’s Johnson & Johnson Racing Dodge Dart can be expected to shine, however, going on past history; he’s in a tie with category legend Bob Glidden for scoring seven wins at Bandimere, coming from 10 final rounds. Appropriately, Mopar sponsors the event, and

Allen and engine-building father Roy have been stalwart Dodge/Mopar racers their entire careers in Pro Stock. They won the 2012 championship and have been contenders at most races throughout their careers. Allen Johnson is currently in 10th place but a good result on “Johnson’s mountain” would go a long way to elevating his chances for a good result by the close of this year.

As ever, weather plays a prominent role at this race. Tuners have to deal with elevation, of course, which necessitates different parts from anything they use in the other 23 races on the calendar. There’s also the matter of heat - and the possibility of thunderstorms on Friday. Hopefully, the always-exciting Friday night qualifying session won’t be affected, as fans flock to this venue to see the nitro cars - and the jet cars - run under the lights.