Making it in NHRA’s Funny Car competition – no easy task!

Josh Crawford has been “playing with cars” all of his life from this central valley location.

In the NHRA Funny Car class, we hear all about the big guns that win many or most of the races; John Force, Matt Hagan, Jack Beckman, Ron Capps, Cruz Pedregon. Occasionally, the attention may fall to a less well-known driver or team that accomplishes a knockout punch to a favorite or has a fireball of a pass down the 1000-foot dragstrip.

But it takes more than this pantheon of heroes to fill a field of 16 race cars, and while the NASCAR term “start and park” may come to mind, every single racer that arrives at a track is there to do one thing: win.

One example is Josh Crawford, 40, of Oakdale, California. Crawford’s been “playing with cars” all of his life from this central valley location. He went to school and was a close friend of the late Eric Medlen, who drove a Funny Car for John Force Racing and whose father, John Medlen remains one of JFR’s primary engineers.

Crawford wants to satisfy his need for speed, his desire to go faster down the track than anyone else on-site at any racetrack. He’s only been in the Funny Car class since 2008, traveling to “local” tracks (Sonoma, Las Vegas, Pomona) as he attempts to make the jump to full-time Mello Yello NHRA competition. He knows it’s a tough call to make, leaving behind thriving businesses in order to make his mark in the drag racing field. 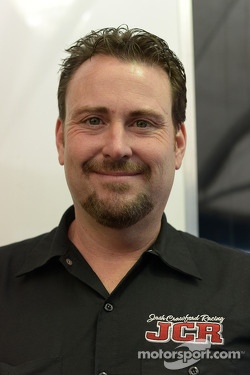 But just like so many others, Crawford also realizes the only way to satisfy his urge is to feed it. “I wanted to move up to Funny Car; it’s what I’ve always wanted to do,” he said. “I had a Super Comp dragster and played with that a little bit but i wanted to progress… “

Crawford has businesses in Oakdale that he built from nothing; he has a wife he adores and three children. He worked at truck dealerships early on, spent a little time at JFR and came back home, formed his own truck repair/paint facility, recently picking up a powder coating paint shop to augment his growing footprint in Oakdale.

He understands the sacrifices necessary to succeed in business – racing or any other enterprise – and isn’t afraid to make whatever sacrifices are necessary to gain what he desires.

“We came into Funny Car with a lot of challenges. This class costs a lot of money and we’re competing against people with unlimited money, virtually. It’s very hard,” Crawford explained. “When I got started, I wanted to test and license in my own car, in something I made,” rather than rent someone else’s machinery to gain his licensing for this 10,000-horsepower classification.

Since he started in Funny Car in 2008 with a Dodge Charger, Crawford has been diligently acquiring “the right parts, the right people and the right crew guys. All of that factors in. If you don’t have a crew that meshes together, they’re going to fight against each other, have issues and not be able to turn the car around,” at the quick pace required in NHRA drag racing.

To that effect, he’s gone with some of the best suppliers in the business, using Brad Anderson (BAE) blocks, John Force Racing cylinder heads, Bryant crankshafts, Bullet camshafts, Manton pushrods, Darton sleeves, Jesel timing drive components and rocker gear. He’s developed a relationship with CP/Carrillo on connecting rods and piston setups, received backing from them and from Torco oil to get his combination as consistent and quick as possible.

On the human side, Crawford chose veteran tuner Lance Larson and young gun Kevin Poynter to head up his crew; there’s maybe 8-10 of them working together at the track, normally with a smile on their faces despite the fact that qualifying for a race isn’t something they’ve always been able to do.

The big guns may take it for granted, but getting one of this 16 spots for Sunday eliminations is Crawford’s goal. Once he’s able to qualify regularly, Josh is looking to move up and work the entire, 24-race tour, leaving the central valley behind to travel like a gypsy from race to race.

Crawford had problems with his setups last year and tore up a lot of equipment before finally finding out why this summer. Still, NHRA saw that he was trying to conduct himself and his team in a professional manner and didn’t really get on his case as much as they could have as he suffered from oiling problems through the close of the 2012 season.

It all started coming together this summer shortly after Larson joined the crew for the late July race in Sonoma. “Lance started looking at things and seeing that the fuel pumps we were using were down, looking at issues like camshaft timing, stuff we went over and fixed,” with Larson and Poynter’s help. The team went to Bakersfield after the Sonoma Raceway race meeting and did some testing, confirming that “things were going in the right direction.

“The parts are much happier now and we’re not tearing up the equipment like we used to.” One of the culprits was a change in block manufacturers to BAE. “The new block doesn’t take as much oil as what we used in the past, so [the engine] was a little full on oil and we pushing oil out on the track” at Sonoma.

“It wasn’t blowing up and hurting itself; it was too full on oil. That was an oversight on our part with the new package,” Crawford detailed. “I just wish we had figured out the problem on two runs (of qualifying) instead of all four runs… “

With the capability of retaining engine parts for a longer period of time, Josh Crawford is looking to complement his races at Sonoma, Las Vegas, Pomona and the occasional trip to Seattle for the 2014 season. He wants to do more than 3-4 races each year: “We’d like to take it to the next level,” he said. In the meantime, he’ll also continue to campaign his nostalgia car, a Harry Smith version of the Blue Max Funny Car, going to Bakersfield’s Famoso dragstrip for its March Meet and Hot Rod Reunion each year.

“We’d like to find some financial assistance to do more than local-based races next year. Phoenix is a possibility, but we’ll have to look and see how much money we can spend toward the race car next year before we make a decision,” he said. Crawford is grateful for the assistance of local sponsors Central Valley Recycling and Daniel O Davis Demolition; like everyone else he needs more help.

Josh Crawford didn’t make the cut for the season finale at Auto Club Raceway in Pomona. While he was 10th after the first of four qualifying sessions, he ended up 19th of 23 teams and drivers attempting to make Sunday eliminations. Still he saw progress on the mechanical side of the equation – former champion Tony Pedregon was among those on the sidelines when Sunday’s racing began.

In the meantime Crawford will continue to develop his Josh Crawford Racing Dodge bodies and his engines to the point where they can help him make the show. He may not be the most famous guy in the NHRA’s Funny Car pit area, but Josh Crawford, and his family-based crew are always ready with a smile and some real information for fans at the racetrack.

That’s part and parcel of the NHRA experience, meeting and getting to know real people who race because they love it – and realize the only good medicine for the racing bug is being out there competing.

Morgan Lucas Racing to field one full-time dragster in 2014