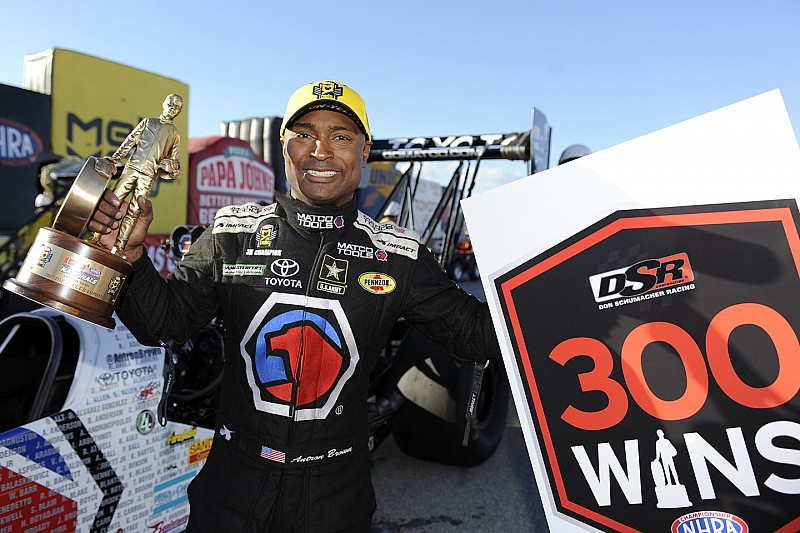 Taking it from the top, Don Schumacher Racing reached the milestone of 300 national event wins in DSR’s 68th double-up. With reigning and three-time NHRA Top Fuel champ Antron Brown lining up against eight-timer Tony Schumacher, Brown did it the hard way, coming from eighth qualifying spot, not something you’d expect from last year’s winner here in Las Vegas. But his Funny Car teammate and winner in that class, Tommy Johnson Jr had an even steeper hill to climb – his was the 19th and final car at the tail end of qualifying the first day.

Qualifying up front definitely wasn’t optimum during this sunny, hot and windy weekend of racing. One by one the top seeds fell during Sunday’s eliminations. Top Fuel’s No. 1 qualifier Steve Torrence made it as far as the quarterfinals, when he lost to Brown. Funny Car No. 1 Courtney Force was out in the first round after her Chevy Camaro SS slowed while running against Gary Densham (who used to drive for John Force Racing).

Even Jason Line, who’s been at the pointy end of qualifying in the season so far, fell to eventual Pro Stock winner, 17-year-old Tanner Gray in the semifinal round.

High school senior Gray’s Sunday win made him the youngest Pro Stock victor in NHRA history. The achievement shows the depth of Gray Motorsports’ program for Tanner, his father Shane (who won at Gainesville two weeks earlier) and Drew Skillman. As usual, this was a Chevrolet Camaro party, as all three Dodge Dart entries fell in the first round.

Many of the nitro teams had difficulty getting down the tricky track in qualifying, and the customary big numbers on Friday afternoon were absent for many racers. In fact, only nine Top Fuel cars posted laps under four seconds and were led by Torrence, who posted his No. 1 on Friday. By Saturday evening, Torrence’s lap remained fastest of 15 dragsters.

Courtney Force’s fast lap came in the first Friday session and only six of 19 Funny Car entrants qualified under four seconds on Friday. It held up through three added sessions even as other competitors improved, in particular Johnson Jr., who came from 19th to sixth in the final qualifying session.

In the midst of this qualifying drama, there was another race going on: the K&N Horsepower Challenge for Pro Stock cars, held every year at The Strip, placed seven race winners and a single fan-chosen driver in competition for $50,000 cash. The anxiety of winning the big bucks took its toll in the first round, where Allen Johnson and Jason Line both fouled, leaving before the green. By the time the semifinals were complete it was Greg Anderson against Shane Gray and Anderson went on to take his Camaro to the win light, his sixth in this event.

Some Sunday drama came from 13th Funny Car qualifier Jonnie Lindberg. The Swedish flopper rookie showed his mettle in his first Mello Yello race at Gainesville, driving Jim Head’s Toyota Camry to the runner-up spot. He did it again in Sin City, beating fourth qualifier and reigning Funny Car champ Ron Capps’ Dodge Charger R/T in the first round, taking out 2012 titleholder Jack Beckman’s Charger in a close second round battle and defeating Densham in the semi-finals. That brought the two-time and reigning Top Alcohol Funny Car champ to his second final round in two races. Impressive.

At the close, it was Johnson Jr. who took the Funny Car title with the assistance of a crew led by John Collins, his exemplary tuner. It was the first time in 16 years that TJ Jr has hoisted a Wally trophy at this track and it was a circuitous battle to get there. “It started off Friday, a very tricky racetrack and few cars got down it. You kind of went into Saturday hoping you could figure it out,” Johnson said. “When the weather changed to a little warmer, it kind of came to everybody and we made the appropriate changes - it went right down the racetrack.”

Race 5 of the 24-contest Mello Yello Drag Racing Series resumes after Easter, as the 30th annual NHRA Springnationals takes place at Royal Purple Raceway outside Houston, Texas April 21-23. While Pro Stock Motorcycle is not on the docket for this race, the J&A Services Pro Mod racers will pound their always exciting vehicles down this historic track.

John Force to be inducted into California Sports Hall of Fame