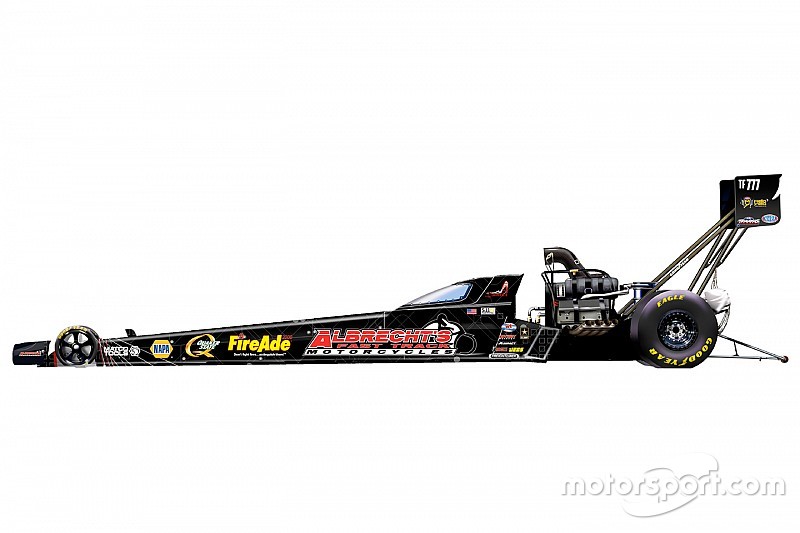 Leah Pritchett’s workload with Don Schumacher Racing (DSR) grows ever bigger as the team was able to sign a new sponsor to help get the 28-year-old NHRA Mello Yello Drag Racing Series Top Fuel driver back on the track.

Pritchett, who joined DSR when her former team, Bob Vandergriff Racing shut down earlier in the year, will fly the colors of Albrecht’s Fast Track motorcycle shop in the NHRA Route 66 Nationals. “I’ve been working hard with Don (Schumacher) on some long-term marketing partnerships,” Pritchett said,” but when nothing had materialized last week, it looked like we wouldn’t be racing at Route 66.

“We had put everything away in our new DSR trailers waiting for our next opportunity, and then, after Dave (Albrecht) stepped up we were able to unlock their doors and start getting ready to race again. I am very much thankful and excited to make the most of this opportunity for Albrecht’s Fast Track,” said the Southern California native who currently lives near DSR’s Brownsburg shop in Avon, Indiana.

“This is a prime example of how a local company can participate as a partner with an elite and first class racing operation like Don Schumacher Racing,” noted Pritchett. This is Albrecht’s second time sponsoring a DSR entry; in 2008 he sponsored a DSR-owned Pro Stock Motorcycle ridden by Craig Treble and came away as a winner. “I’ve known Don for about 15 years,” Dave Albrecht said, “ and it’s incredible to get this opportunity.”

This weekend marks the fourth race for Pritchett, a graduate of Cal State San Bernardino with Don Schumacher Racing, whom she joined as a part-time Top Fuel racer in mid-May for the Atlanta round. She’s 10th in the season-long point standings as the series enters the second half of its calendar year. The top 10 racers after this year’s Chevrolet Performance U.S. Nationals at Indianapolis over Labor Day weekend advance to the Countdown to the Championship six-race playoff; Pritchett certainly hopes to be among them.

Pritchett is also scheduled to race the U.S. Nationals with DSR. She has been racing with the independent Lagana Brothers team, advancing to the quarterfinals two weeks ago at Norwalk with the Lagana operation. Her crew chief for this weekend’s race are veterans Mike Guger and Joe Barlam, who tuned Pritchett to her first Top Fuel victory in February at Phoenix, while Bob Vandergriff Racing was still in operation.