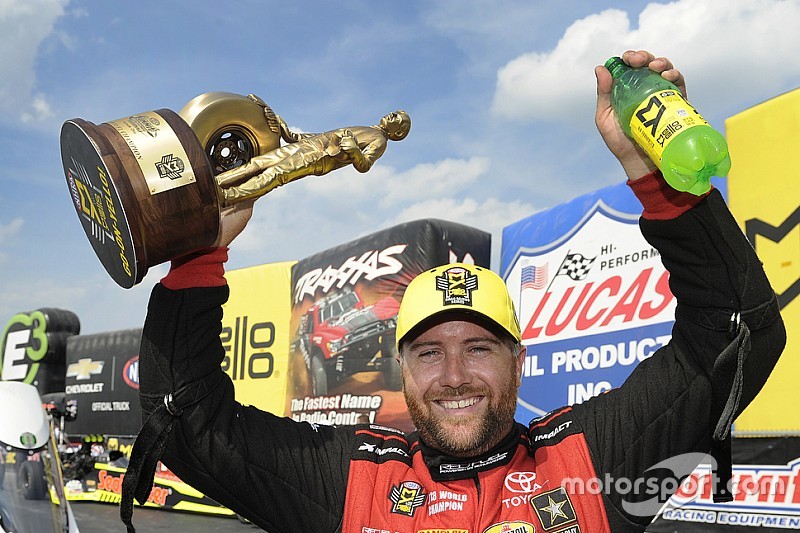 Shawn Langdon will kickstart his 2017 season this weekend, as the NHRA Mello Yello Drag Racing Series arrives at Royal Purple Raceway just outside Houston for its fifth round of a 24-race season.

In the pro ranks, Top Fuel, Funny Car and Pro Stock are competing this weekend, together with the J&A Services Pro Mod series. It’s the start of a three-race sprint, as teams go from Houston to Charlotte to Atlanta in three weekends.

The meeting is notable for a change in the Top Fuel lineup, as Kalitta Motorsports takes on a third dragster with 2013 champion Shawn Langdon at the wheel. Langdon, who earned his title with the Al-Anabi Racing team run by Alan Johnson, has been in a state of limbo since that squad was forced to shutter its operations in 2015.

The Californian ran events with Don Schumacher Racing (DSR) through the 2016 campaign, but hasn’t been on an entry list since last year’s season finale. However, just a week ago, Kalitta Motorsports announced Langdon, 34, as its third Top Fuel entry backed by Global Electronic Technology, a payment processing firm.

“It’s been a tough year so far with me sitting on the sidelines,” Langdon said. “It has been the first time since my rookie year (2009) that I haven’t been able to attend the NHRA races. I cannot thank Connie [Kalitta, team owner] and Jim O [Oberhofer, vice president of operations] enough for the opportunity.

“I also want to thank Don (Schumacher) and everybody at Don Schumacher Racing for bringing me in when I didn’t have a ride and making me feel like part of the family. I want to thank Don for keeping me on the payroll throughout the process of trying to find sponsorship.”

Langdon is looking forward trying to reach the Top 10 and thus gain a place in the Countdown to the Championship playoffs, despite giving his rivals a four-race headstart.

“We have 14 races to catch up and I am confident in my chances with the group that Kalitta is putting behind me,” he said.

With these additions to the team, Kalitta Motorsports is doing a bit of crew chief and tuner shuffling in its Top Fuel ranks. Oberhofer is now lead tuner on the dragsters of both defending Houston winner Doug Kalitta and rookie Troy Coughlin Jr. He continues to team with Troy Fasting on Kalitta’s car and works with Glen Huszar and Nick Casertano on Coughlin’s rail.

Another change in the dragster category is the return to driving for Bob Vandergriff Jr., who has three Wally winner’s trophies in the class, yet shuttered his eponymous team four races into last season when his primary backer died. Vandergriff has decided to contest Houston, Atlanta and Denver with backing from Valvoline and tuning from veterans Ron Douglas and Mike Guger.

At this time the Top Fuel category is a DSR runaway, with eight-time titleholder Tony Schumacher, Leah Pritchett and reigning (three-time) champ Antron Brown sitting atop the standings. Kalitta is fourth and Brittany Force lies fifth, followed by Steve Torrence, Clay Millican, Coughlin, Terry McMillen and Scott Palmer. Only the top three have won a race, with Pritchett taking the first two contests of the season.

While Doug Kalitta is still looking for his first career NHRA Top Fuel championship in a come-close career that mimics reigning first-time Funny Car champ Ron Capps, the veteran seeks his third consecutive victory on the Houston Royal Purple dragstrip. Kalitta has a history of coming out strong in the start of each season, but seems unable to sustain his starting speed through to the end of each 24-race campaign, particularly in the six-race Countdown to the Championship late-season playoffs.

Then there’s veteran dragster racer Clay Millican. A full 13 years after reaching his first Top Fuel final round at this venue, Millican still seeks his initial Wally winner’s trophy. Millican, a six-time IHRA titleholder, admits that he “never thought that 13 years later we would still be wondering when our first NHRA win would finally come to us. I am confident this is our year.”

In Funny Car, the story since round 3 has been the competitiveness of rookie Jonnie Lindberg in Jim Head’s Toyota Camry. Swedish racer Lindberg, 27, is the two-time and reigning NHRA Top Alcohol Funny Car champ. Although he didn’t race in the first two contests of the season, Lindberg claimed runner-up positions behind John Force at Gainesville and Tommy Johnson Jr. in Las Vegas and thus currently sits eighth in the points.

“Only having three runs with a [Funny Car] before Gainesville, I really didn’t know what to expect,” Lindberg said. “We jumped in the car in Gainesville just hoping to make it down the track and we made the finals. Then we did it again in Vegas. It’s been great. It’s a good combination with Jim [Head, crew chief and team owner] and I. I don’t really think about the car in the other lane.

“We need to continue to work on getting our E.T. better and I have to cut my reaction times,” he continued. “Those are the important things right now. Jim is really good at getting the car down the track and that’s big – it’s hard to win if you smoke the tires. Now we just need to make it a little faster. We have the power and this is a team that works really hard.”

The Auto Club Road to the Future (rookie) candidate faces other Top 10 racers, including two-race winner Matt Hagan, Johnson Jr., Force (a seven-time winner at Houston), Capps and defending Houston race winner Courtney Force in this weekend’s competition. Only the top three own race wins, but the balance of the flopper top 10 include previous champs Jack Beckman and Robert Hight, together with Jim Campbell and J.R. Todd, the latter still adjusting to his swap from a dragster to the difficulty-laden Funny Car class.

Once again it’s a small entry for the Pro Stock class, but the category boasts some very competitive teams and drivers. Still, only 13 have signed up for the trip to the Gulf Coast city, including reigning titleholder Jason Line in his Chevrolet Camaro, points leader and defending race winner and points leader Greg Anderson, Bo Butner III (these three from the Summit Racing team). Vincent Nobile, Drew Skillman, Chris McGaha are making the drive to race their Chevy Camaros in Houston.

There are three Dodge Dart entries, for 2013 champ Allen Johnson, Richie Stevens Jr and Alan Prusiensky, while the balance of the entries are in the Chevy Camaro camp. Two-time champ Erica Enders, her teammate and five-time category champ Jeg Coughlin Jr. (who has four wins at the Houston track), the most recent and youngest Pro Stock victory Tanner Gray, and returnee Alex Laughlin complete the entry list. Tanner Gray’s father Shane, who won the Gainesville round ,is sitting out this race.

Royal Purple Raceway, site of the NHRA Springnationals, has been known for its humid weather and according to current weather forecasts, temperatures will be mid-80s on Thursday and Friday, with 50 percent thunderstorm chances for Saturday, resulting in cooler temps on Sunday. Qualifying on Friday includes two late-afternoon sessions, while Saturday time trials take place in early- and mid-afternoon, if forecasted thunderstorms don’t intervene. Sunday eliminations, as customary, start at 11AM CDT.