EPPING, N.H. – Shawn Langdon advanced to the Top Fuel Finals for the fifth time in the last seven races to lead Toyota in today’s NHRA Mello Yello Drag Racing Series’ Auto Plus New England Nationals in front of a packed house at the New England Dragway in Epping, N.H.

After qualifying second, Langdon defeated Tim Boychuk, Bob Vandergriff and Terry McMillen to advance to the finals before falling to Spencer Massey. With the strong effort, he regained the Top Fuel point lead. 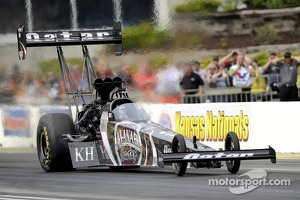 “The Al-Anabi car ran great today on race day and made some really strong runs,” said Langdon. “Going to the final was great, and we leave New Hampshire with the points lead - that was the goal for the weekend.

We wanted to win the race, but it didn’t work out that way. We still had a strong car all weekend that qualified well and ran great in eliminations.

We just have to move on from here and keep pressing on.”

Among the other Toyota Top Fuel entries, Morgan Lucas was victorious in his opening round against teammate J.R. Todd, before losing in round two. Todd, Antron Brown and Khalid alBalooshi all lost in their first runs.

In Funny Car, only Del Worsham was able to advance past the opening round, defeating Robert Hight before being losing to Ron Capps in his second run. Cruz Pedregon, Tony Pedregon and Alexis DeJoria all fell in the first round.

The NHRA Mello Yello Drag Racing Series is back in action again next weekend for the O’Reilly Auto Parts Route 66 Nationals, June 28-30. It marks the third event in a four-races-in-four weeks portion of the schedule.

Cruz Pedregon, Snap-On Tools Toyota Camry Funny Car: “Unfortunately, 1st round didn't go as planned and we lost to Jeff Arend after smoking the tires. The silver lining is that the top 3 in funny car all went out first round so we will still leave here 2nd in points.”

Khalid alBalooshi, Al-Anabi Racing Toyota Dragster: “Our Al-Anabi team did not have its best weekend, but that is OK. This is the race, and these things happen. We have done some very good things this year, but we are still learning and working to improve our race team.”

Alexis DeJoria, Tequila Patrón Toyota Camry Funny Car: “Unfortunately, we didn’t get the win in first round today. We had a little bit of a malfunction in our timing system, which caused us to drop a cylinder so our Patrón Toyota Camry was only running on seven cylinders.

The malfunction was plaguing us all weekend, causing us to run a lot slower than everyone else. Thankfully, we’ve been able to identify the problem, so we shouldn’t find these same issues going into Chicago.”