Joy and drama in Sin City 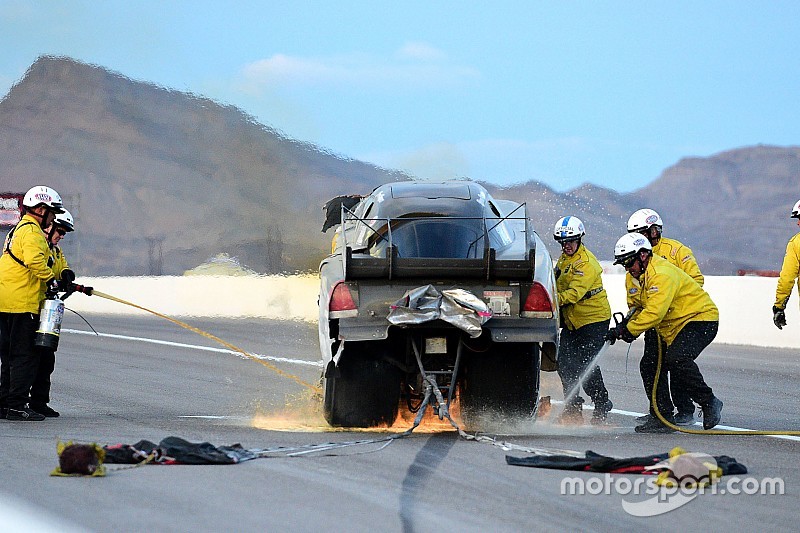 There was plenty to celebrate at the NHRA Toyota Nationals in Las Vegas – not just titles won but also great escapes. By Anne Proffit.

The 16th annual NHRA Toyota Nationals on The Strip at Las Vegas Motor Speedway had more entertainment than you’ll ever find at casinos on the strip, Las Vegas Blvd. There were truly fast and exciting racing all four days, plenty of parts failures that caused stoppages, two heavy crashes where the drivers walked away. And that’s only the beginning.

Two champions were crowned during this penultimate weekend of Mello Yello Drag Racing Series and the season finale for J&A Pro Mod Series.

Rickie Smith secured his third Pro Mod title in 2016 on Saturday, adding to his 2013 and ’14 accolades. After the second one, Smith said he was going to retire, but “when you’re winning and doing this good, you hate to quit.” He did say the 2017 would be his final as a driver. We’ll have to wait and see on that one.

In the big leagues, Antron Brown and Don Schumacher Racing arrived in Vegas with 150 points in hand in the Top Fuel points standings, and the Matco Tools ‘Tools for the Cause’ pink-hued dragster’s secured their third title in six years when closest pursuer Doug Kalitta, of Kalitta Motorsports, failed to go beyond the second round.

Brown defeated Australian driver Wayne Newby in the second round and then celebrated his title at the top end. His championship weekend continued to the semifinals, where he lost to eventual finalist J.R. Todd, who also drives for Kalitta. This is the second consecutive year that Brown has secured his championship in Sin City, marking the first time in seven years that a Top Fuel champion has won back-to-back titles.

After giving glory to God, Brown turned his praise earthward to tuners and longtime crew members, most of whom have been with the New Jersey native since he moved from Pro Stock Motorcycle to Top Fuel in 2008.

“Brian (Corradi) and Mark (Oswald) and our entire team has worked so hard and I’m just privileged to drive that racecar for Don Schumacher Racing, because Don makes it all happen,” he enthused.

“We know where we came from and we’re living the dream,” he continued, calling out sponsor Toyota and many of his partners. “That’s what’s so great about this sport, because it takes everyone - all the sponsors - to make this go.

“You just need to be steady and let everything flow like water. You can never think about how close you are to a championship; you just have to stay focused every round. Once you win a race, you erase that and move on to the next one.”

Notably, this was the first time since Seattle in early August that there were no Don Schumacher Racing (DSR) entries in the Top Fuel or Funny Car finals, leaving the team’s annual total (so far) at 25 victories. The Top Fuel battle was between winner was between Todd and Steve Torrence’s Capco Contractors rail

The Brownsburg, IN-based Schumacher team will add to its championship total, though, as the only Funny Car drivers still eligible for the title race for The Don. As he has for most of the 18-race regular season and for all of the Countdown to the Championship six-race playoffs, Ron Capps leads his teammates into the season finale the second weekend of November at Pomona, CA.

Capps has 86 points in hand over two-time Funny Car champ Matt Hagan and 113 over Tommy Johnson Jr., who fell in the first round in Vegas, dropping from second to third as Hagan went to the semifinals. The maximum number of points any driver can amass is 130 points per race.

Together with tuner Rahn Tobler and assistant Eric Lane, Capps has been focused on attaining the “little points” awarded in qualifying that can make the difference between his first championship or being a five-time “bridesmaid.”

The duo have worked that plan exceptionally well, gaining bonus points in qualifying and going to the finals twice and the semifinals three more times in the Countdown’s opening five rounds. In Vegas, Capps fell in the semis in a close contest with finalist Courtney Force.

“Just another incredible job by Tobler and this NAPA Know How team this weekend,” he reflected. “I always brag about Tobler, but he adjusted to so many changes in conditions over the weekend, making sure our Dodge Charger R/T is one of the quickest in every qualifying session - and we advanced to another semi.

“It’s all about how this team has done all year - not what I’ve done. It’s down to one more race and we have a lot of things left to do - but we’re closer. This is by far the best chance we’ve had going into Pomona.”

As if title tension wasn’t enough, emotions ran even higher for Capps in Vegas. He was waiting in the final qualifying queue late Saturday afternoon when his brother Jon, also racing in Funny Car, had a vicious accident that sent his Chevrolet Impala from the right lane to the left, where it hit the wall hard and continued up the track on fire. It took time to extricate Jon Capps but he did climb out of the stricken vehicle unaided and returned to the track the next day. Still, the championship contender qualified fourth for the penultimate event and continued his racing the following day.

That was one strike for Funny Car. Alexis DeJoria clouted the left wall again, after suffering a similar smack at Sonoma in July that sidelined the spring Las Vegas winner until the Nationals at Indianapolis on Labor Day weekend. Last weekend, DeJoria powered her Patron Toyota Camry to ninth place in the second Friday session at 3.909/326.32 and would set a 3.915 in her Saturday qualifying pass. Her fourth pass wasn’t the charm, however, and although she climbed from the car after the hits, on Sunday morning the team elected to withdraw.

By far the most eye-opening Funny Car incident occurred in the first round of eliminations early Sunday afternoon. The fifth pair were two-time champ Cruz Pedregon’s Toyota Camry in the right lane against the Chevrolet Camaro of 2009 champ Robert Hight. The latter hazed the tires early and was trying to recover, so he didn’t notice when the front of Pedregon’s car became light and eventually lifted to the point where the driver was performing a wheelstand up the track. Let’s hear it for wheelie bars.

Pedregon’s Camry eventually came down on its tires – and won, with an unusual 4.244/218.55 pass –  but the damage was too extensive for him to continue to the second round, giving a bye to Capps.

“All of a sudden I saw blue sky,” he recalled, adding that he thought “I might be doing a wheelstand,” and hoped the car would come down in the proper direction, which it did.

Fans flocked to the Pedregon pit area after this incident to make sure the driver was alright - after applauding wildly from the stands as the car was brought back on the return road.

The situation in Pro Stock changed around with this race, as Shane Gray, who’s retiring from driving at the close of this year and handing the steering wheel to son Tanner won his first race of the year and first since the U.S. Nationals in 2014 for a total of five Wally trophies.

With this win, Gray moved to third in the standings, behind Summit Racing/KB Racing teammates Jason Line (+94) and Greg Anderson (+75 points) who both fell in the semifinals.

“I missed a chance to gain on Jason here and possibly take the points lead, but that’s okay,” Anderson said. “It’s obviously meant to come down to the final race and the last round that we run.”

The Pro Stock Motorcycle fight for the championship sees Vance & Hines Screamin’ Eagles Harley Davidson riders Eddie Krawiec (three-times champion) and Andrew Hines (five times) heading to Pomona tied on points after Hines defeated his teammate in the all-Harley-Davidson Screamin’ Eagle semifinals. And Vegas winner, Jerry Savoie, has brought his Suzuki within three points of the H-D duo. As he commented afterward, “We got a fast motorcycle. It’s going to be very, very interesting when we get to Pomona.”

The Finals at Auto Club Raceway in Pomona, Calif. run from Nov. 10th through 13th. They show every signs of being as dramatic as the Vegas race, but let’s hope for fewer heart-in-mouth moments.