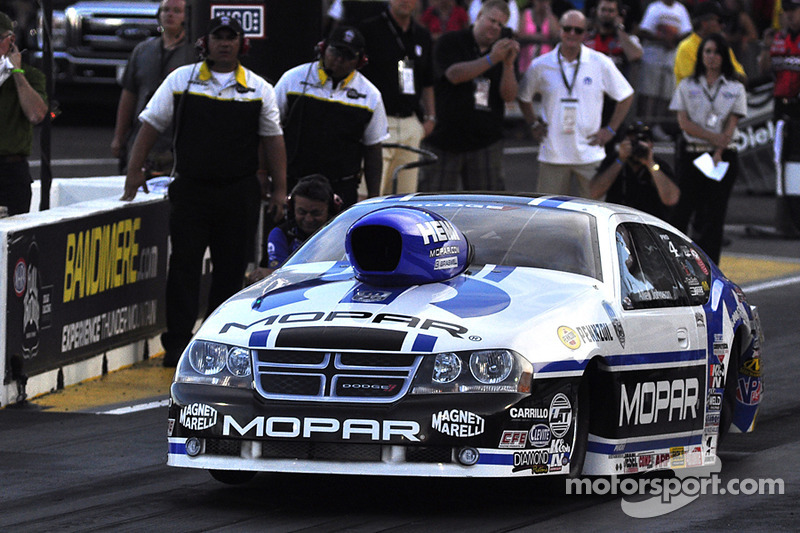 But the stat that matters most to Johnson is the 109-point lead the Team Mopar veteran will take away from Gateway Motorsports Park, a greater sum than when he entered the third of six races in the NHRA Pro Stock “Countdown to the Championship” playoffs.

The four-man Don Schumacher Racing (DSR) Dodge Charger R/T squad basically duked it out for the Funny Car event title between themselves, with No. 1 Qualifier Jack Beckman emerging victorious.

“Congratulations to Jack Beckman from all of us at Mopar on his win at the Midwest Nationals,” said Pietro Gorlier, President and CEO of Mopar, Chrysler Group LLC’s service, parts and customer-care brand.

“The Mopar-powered Funny Car package has been strong again this year, and we look forward to Jack and his Don Schumacher Racing teammates contending for more wins and the Championship in the final three races of the season.” 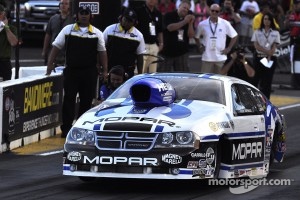 Johnson, starting out of the No. 2 spot in Pro Stock, squared off with Greg Stanfield in the opening round on Sunday, earning the victory with an elapsed time of 6.535-seconds at 211.49 mph.

With lane choice over Mike Edwards in the quarterfinals, Johnson motored to an easy win on the strength of a 6.517/212.03 run after Edwards encountered trouble shortly after leaving the starting line.

He and Nobile both made sudden moves off the starting line and were forced to get off the throttle, with Johnson getting back in gear and to the finish line first with a 8.564/184.60 pass.

In a rematch of their final-round battle last week at Dallas, won by Johnson, the Greeneville, Tenn., native came out on the opposite end against Erica Enders.

“Believe it or not, we sort of struggled all weekend here,” said Johnson, who earned his 34th career final-round appearance today and also the 299th round win of his career. “We didn’t make any good runs until the second round today.

In the semis the track had just been sprayed, and Vincent and I didn’t move a foot. Luckily, I got it in gear before he did and beat him, but that destroyed the clutch. We had to put a new clutch in for the final, and I think it affected us. Our 60-ft. mark wasn’t very good at all.

“The Mopar Dodge Avenger team is leaving here with about 20 more points than we came with, with three races left, so we can take that away. We’ve got 12 rounds to go, but we have to just stay consistent and gain points.

The team is staying here in St. Louis an extra day to test. We’re going to work tomorrow, work on our 60-ft. marks and see if we can go to Reading (the next event) and do better.”

In Funny Car, Beckman drove his Mopar HEMI-powered Don Schumacher Racing (DSR) Dodge Charger R/T to a first-round win over Alexis DeJoria with a 4.127/306.12 effort, then recorded a 4.093/306.95 in his quarterfinals defeat of Jeff Arend, who was unable to make the run.

Beckman also had an easy go of it in the semifinals, defeating Tony Pedregon (who went into tire shake) with a 4.093/302.35. That set up a Mopar vs. Mopar final-round match against Matt Hagan, who knocked off current Funny Car “Countdown to the Championship” leader and Mopar-powered Dodge Charger R/T teammate Ron Capps (who defeated fellow DSR Dodge driver Johnny Gray in the opening round) in the quarterfinals during his march to the money round.

We had to lean on it a little bit at a time, and maybe that was the advantage of qualifying No. 1. So it looked relatively easy, but it’s because of those guys (his crew). Those nine guys make me look good standing up here holding a trophy.”

Johnson is first in the Pro Stock standings, with Nobile fourth, Gaines ninth and Coughlin tenth. In Funny Car, Capps is first, Beckman second, Gray is eighth and Hagan 11th.

Next up for the Mopar-powered NHRA Full Throttle Drag Racing Series contingent is the fourth of six races in the NHRA “Countdown to the Championship” playoffs, the NHRA Nationals at Maple Grove Raceway in Reading, Pa., Oct. 4-7.