Funny Car driver Johnny Gray will have the opportunity to go after what has been just out of reach at The Strip at Las Vegas Motor Speedway, one of his favorite racetracks on the Full Throttle Series tour, as he and his Service Central-backed Big O Tires Dodge Charger R/T return for the 12th annual Big O Tires NHRA Nationals this weekend. 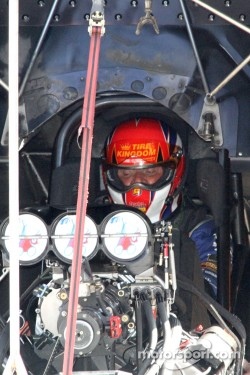 "It's always exciting when we get to go to the Las Vegas racetrack, that's for sure," said Artesia, N.M.-based Gray. "I really like to race in Vegas. The fans there are just awesome, and the autograph sessions are always so much fun.

"The facility itself is beautiful. If you ever have a chance at the end of the day, go up the bleachers and look down at the racetrack after all of the noise and everything is through. You'll see that there is nothing prettier than the Las Vegas racetrack at night."

The lauded facility and the thrilling atmosphere are only part of what Gray loves about Vegas. Twice before, the veteran driver has very nearly reached the winner's circle at The Strip.

At the Las Vegas spring event in 2011, Gray's first season back in a nitro Funny Car after piloting a Pro Stocker for three years, he wheeled his way to the final round, where the victory went to opponent Robert Hight by a slim .02-second margin.

Last year, Gray had nothing to lose during NHRA's Full Throttle Series Countdown to the Championship playoffs, and with plenty of room to play, the Service Central team took a gamble during qualifying at the Big O Tires-sponsored event and pushed their Dodge just a smidge too far in gunning for the pole. The result was a fantastic - though costly - display as the engine went kaboom and the Funny Car body was launched high in the air. Gray safely piloted the topless car to a stop just past the finish line and ultimately qualified in the No. 10 position.

On raceday, the Rob Wendland-tuned hot rod schooled the competition with progressive and quickening runs that would result in a third chance in as many races to grab the gold for the swiftly jelling team. They gobbled up round wins over Melanie Troxel, Paul Lee and Bob Tasca III before Gray's Don Schumacher Racing teammate Ron Capps blocked their title-pursuit with a 4.10 to a slowing 4.20.

"That was a tough one," admitted Gray. "We pushed a head gasket out, and Mr. Capps ended up with the trophy that we really felt was ours. But heck, it gives us a great goal this time around."

So far this season, Gray has collected a series of monumental moments. He was the No. 1 qualifier at Full Throttle events in Phoenix and Norwalk, won in Englishtown and Sonoma, and visited the final round at the Tire Kingdom Gatornationals in Gainesville and the recent Auto-Plus Nationals at Maple Grove Raceway - where he drove the eye-catching "Lemonator" Dodge for the Alex's Lemonade Stand Foundation.

Gray, currently 4th in the Full Throttle Series Funny Car standings, is already positioned for a career-best finish but isn't ready to rest; he and his Service Central army are aiming to gather as many points as possible in the remaining two events.

"We would love to bring the Big O Tires Service Central Dodge to Las Vegas and be a dominant car; we'd love to win the race for our sponsors," said Gray. "It's difficult not to think about what happened last year, but that was then and this is now, and we've got a chance to get that trophy. We're going after it."