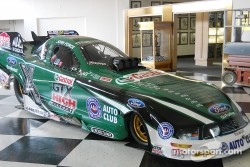 “I always thought they put you in the Hall of Fame when you were done racing or dead. Well I’m not done racing and I promise you I ain’t dead. This is a big deal to go down to Talladega with Kenny Bernstein and Richard Childress. I am proud to represent my sponsors like Castrol, Ford, Auto Club, Mac Tools, Traxxas and BrandSource. They have supported me over the years and they are going into the Hall of Fame with this old truck driver,” said Force.

“I have to thank all my crew guys and especially my crew chiefs like Austin Coil, Bernie Fedderly and Mike Neff who helped me win fifteen championships. The brain-trust was also a big part of our success so I have to thank Jimmy Prock, John Medlen, Dean Antonelli, and Ron Douglas.”

The first and only driver to win 100 NHRA tour events and 1,000 racing rounds, the first Funny Car driver to overcome a points deficit on the final day of the season to win the championship, the first to win series titles in three different decades and the oldest champion in any racing discipline, Force is without a doubt one of the most iconic figures in all of motorsports.

The 1996 Driver of the Year and a four-time winner of the Jerry Titus Memorial Trophy that identifies the driver receiving the most votes for the AARWBA Auto Racing All-America team, Force this year is bidding for his 16th title in 23 years; his team’s 18th.

If there was one moment that ever caused Force to question his chosen career path, it was the 2007 death of team driver Eric Medlen, a tragedy that led to the creation of the Eric Medlen Project at JFR East in Brownsburg, Ind.

“Winning is still the priority,” Force said, “but today it goes hand-in-hand with safety. Vince Lombardi said ‘winning is everything’ and I used to go with that. It’s what I told my team. But I don’t think Lombardi ever lost a man on the playing field.”

Refusing to accept the explanation that Medlen’s accident was a one-in-a-million fluke that never again could happen, Force commissioned the first major changes to the basic Funny Car chassis in 25 years. It was work that paid immediate and unexpected dividends when he himself crashed heavily on Sept. 23, 2007, exactly six months after Medlen’s death. That crash in Dallas, Texas, left him with injuries that required six hours of reconstructive surgery and months of rehabilitation.

Nevertheless, while he suffered broken bones in both hands and both feet, broken fingers, broken toes, severe lacerations and tendon damage to an already injured right knee, significantly he had no head, neck or torso injuries and five months after his crash, the sport’s biggest winner was back in a race car.

He won the O’Reilly Summer Nationals at Topeka, Kan., in 2008, but he now admits that it wasn’t until the 2010 season that he really felt up to the day-to-day grind of competing for a championship. Today, he makes no concessions to his age. He insists, especially after undergoing ACL reconstruction surgery in the off-season, that he’s in “the best shape of my life.”

Of course, if he never won another race or another championship, his legacy would be secure. He did add to his legend winning the 2010 NHRA Full Throttle Funny Car championship on the last day of the season to cap a Hall of Fame recovery and continue a Hall of Fame career.