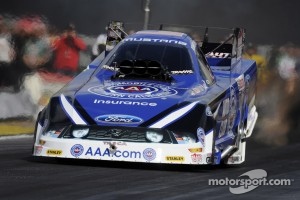 GAINESVILLE, FL --- Robert Hight and Mike Neff were consistently at the top of the Funny Car class throughout the two days of qualifying at the 43rd annual Tire Kingdom NHRA Gatornationals. They will go into Sunday’s eliminations as the No. 3 and No. 4 qualified drivers after Cruz Pedregon and Jack Beckman took advantage of killer conditions during the final session to post the two quickest runs of the weekend. Neff picked up nine qualifying bonus points for the weekend while Beckman and Pedregon each picked up three respectively. Neff’s qualifying times of 4.107, 4.080, 4.084 and 4.065 were the most closely grouped of any of the Funny Cars.

“We are happy with the consistency. Anytime you can make four good runs that always makes you feel good. We were trying to run a little bit better that last run. The conditions got so good so fast and we tried to run better than 4.06 but it didn’t do it,” said Neff, driver and tuner for the Castrol GTX Ford Mustang. “All in all with four good runs we’ll take it. We won’t see these conditions tomorrow. The conditions will be back like they were earlier in the race. We just feel good about our four runs so far.”

Hight was also pleased with the Auto Club team’s performance over the weekend and their only mishap was an aborted run on Saturday morning. In the final session Hight and Neff were paired up and made blistering 4.0 passes to end the session.

“(Racing beside Neff) was awesome. (Going last) gives you the chance to see what other guys are doing. When Cruz went out there and ran 4.02 and Beckman ran 4.04 (Crew chief) Jimmy (Prock) didn’t change anything,” said Hight. “He didn’t go into the box. He left it alone. Looking back on it we could have run close to that good we think. He can see the problem, not that running 4.05 is a problem. That is a really good number. If we needed to throw down a great number tomorrow we can step on it. We know what we need to do. Then again we are not going to just throw a run away. We are going to take that “Moneyball” approach.”

“If you aren’t making good runs in qualifying you aren’t going into the race with a lot of confidence. We were pressing this morning and it didn’t go. At least we know our boundaries and the good news is we didn’t do that tomorrow in the first round. When you can make two good runs on Friday you can be flexible on Saturday. You can play a little on Saturday. That is not a bad scenario. Mike Neff has the best car out here. He made four solid, solid runs in a row. When the conditions get great those other guys throw down. They got away with a couple of good numbers. You have to give Neff and his team credit because that Mustang is running really well and you make four runs like that tomorrow and you’ll be in the winner’s circle. That is what we need to do.”

“This race is huge. I saw Shirley (Muldowney) and (Don) Prudhomme yesterday. This was one of the highlights for John early in his career was travelling from California to the Gatornationals. I am motivated. We are coming off a win in Phoenix but I want to win this race tomorrow. I honestly think we have a good shot. This is a race with a lot of history. I am going to make my mark tomorrow.”

Today’s sessions involved quite a bit of excitement, especially for the Traxxas team and rookie driver Courtney Force. Force came into Saturday in the No. 12 bump spot and was able to keep her 4.188 ET at over 290 mph run from Friday.

The team’s third qualifying shot, the first of today, didn’t get off to the best start when the car fired up with a surge of RPM. Despite the start-up issues, the Traxxas Ford Mustang never made an unexpected move and the car continued through a normal staging process. During the pass, Force drifted right and smacked the wall hard enough to cause severe body damage, bend the right side header to the ground and leave it scraping the track surface. Force emerged from the car dizzy and with slight bruising, but ready to get right back in the car for her last qualifying attempt of the day.

“My day wasn’t horrible I guess. The first run we were obviously going after a good run to get in the show. It went down the track and I was hoping it would get through the tricky part of the track but it ended up striking the tires and it took me hard over into the wall. I was just trying to get the car stopped and get out safe after that. I jumped out through the hatch and it kind of knocked the wind out of me,” said Force.

“I had a little hard time breathing but the medics checked me out. I made sure to tell them I was able to go up there and run again. That was my number one thing is I have to get back in the car. My guys were back in the pit working as hard as they could. They had to put together a new chassis and body. My other chassis was bent up pretty bad and just in case we never want to re-run a chassis after an incident in case there is something wrong with it. We had to put it together and go up there and run again. I got a little time to catch my breath. I warmed it up and everything was good. We were able to get it back up there and make my quickest pass of the weekend. The 4.13 was great and it was nice to get a full run before tomorrow.”

John Force Racing sharpened team moral and became the definition of their motto for 2012, “One Team, One Goal,” as crew members from the teams of Robert Hight, John Force and Mike Neff came to the rookie driver/team rescue with the assistance and knowledge needed to get the Traxxas Ford Mustang chassis back to superb condition.

“There was no hesitation to get back in the car. I have always seen how dad does it and he always gets back in the car. This is when you have to pull it together and be a real race car driver. You can’t let it get to you. I had a couple tears but you can’t let that get to you and you have to work through it. I put a little ice on my body and I had to be ready to go. I wanted to be sure I could get back out there no matter how much pain I was in. I wanted to do it for my guys they were out here working hard and I wanted to get in the show for them and for me. That was my number one goal. I knew when I rolled up I was already in but I wanted to get a good pass so I felt comfortable and my team knew we were back on track too. I think it helped for all of us to get that run.”

Force ran a 4.136 ET at a speed of 306.12 mph on her last attempt which moved her up and into the top half of the field. By the end of the round, Force sat comfortably in the No. 11 spot. She will go on to race Ron Capps in the first round of eliminations on Sunday. This will be the first time the youngest of the Force group has raced Capps in eliminations.

Courtney gave her team much of the credit for getting her new Traxxas Ford Mustang race ready in record time.

“It was awesome. As a driver I could not be out here without them. I was trying to take time and cool off. I needed to get myself back together. My team was amazing. They had to work so hard to get this thing back together and I am sure getting ready for that last session took a lot out of them. All our teams came together. Everyone from John Force Racing was working together and I don’t think you would see that too many other places. We got this Traxxas Ford Mustang to the other end on the last qualifying pass and that was all me needed to do.”

John Force came into Saturday in the no. 6 spot. For the first session of the day, his Castrol GTX High Mileage Ford Mustang danced from left to right while speeding down the track, but posted a respectable 4.149 ET at over 309 mph.

During the fourth and final qualifying shot of the day, the Castrol GTX High Mileage team and legendary driver gave fans a great show and laid down a 4.114 ET at over 309 mph. By the day’s end, Force sat soundly in the no. 7 spot. He will face rookie driver Alexis DeJoria in the first round of eliminations on Sunday.

“We plan on winning tomorrow. We have to win tomorrow to get back the money we lost today. Neff is right on his game and so is Robert. They are running those 4.05s and 4.06s. Cruz hit a moonshot but he does that. God bless him and he gets away with it. I love the way he races. My hot rod is in there and tomorrow is another day. We ran 4.12 and 4.11 which is not as quick as I want to be but we are learning how to run it. Courtney honest to God, just getting back in the seat; that is what race car drivers do,” said the winningest driver in NHRA history. “She put Traxxas where they want to be. At the end of the day I want to clarify that was a brand new chassis but it was a chassis we had run in testing. I won’t send my daughter in a car that has not had some laps on it. That car has been run. We aren’t going to do anything unsafe and we’ll never race a car that has been crashed. Not after the days of Eric (Medlen); John Medlen wouldn’t allow it a d neither would Ron Douglas or any of us. We aren’t going to take the chance. We were worried we wouldn’t make the call but her team came together and got her up there. They ran 4.13. John Force Racing spent a little budget but that is why the sponsors pay the big bucks that they do. We’ll be back in the game tomorrow.”

This will be the second time since the beginning of the 2012 season that Force and DeJoria have met in the opening round of eliminations. Force defeated the daughter of businessman John Paul DeJoria, owner of Paul Mitchell Hair Care Products, in Pomona for the NHRA Winternationals earlier this year.

“We have Alexis tomorrow and she is a tiger on the tree and (crew chief Del) Worsham knows how to tune a car. He is a real savvy guy whether it is hot or cold. He will make it work. I just have to keep my nose clean and go up there and race her and try and get a win. If not I’ll go over there and congratulate her. She is a real good kid and I am getting to know the family. They are real good people.”