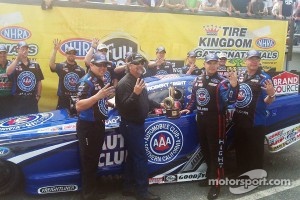 GAINESVILLE, FL --- Robert Hight won for the second time in 2012 defeating Johnny Gray in the final round of the 43rd annual Tire Kingdom NHRA Gatornationals presented by napafilters.com. For Hight and the Auto Club Ford Mustang team is was their second consecutive final round victory over Johnny Gray (Toyo Tires NHRA Nationals in Readin, Pa., in 2011) and HIght’s 14th win in sixteen final rounds. This win was one of the big ones of Hight’s career.

“I have won the US Nationals and I have won both the Pomona races but next to Indy this is where you want to win. Ron Capps said it best a few years back you don’t want to retire without winning the Gatornationals,” said Hight a first time Gatornationals finalist. “This is a huge race. The Hall of Fame inductions are before this race so everybody from drag racing past is here for this race. They are out there watching and I have a lot of admiration for them. If it wasn’t for them, the pioneers, this sport wouldn’t be where it is today. I want to show my respect to them.”

Two weeks ago Hight defeated teammate Mike Neff in the finals of the NHRA Arizona Nationals locking in his position as a member of the inaugural Traxxas Shootout to be held during the Mac Tools US Nationals. Getting another win today has Hight motivated for continued success.

“Two is a row is huge. That is a great way to start the season and three in a row for John Force Racing. I was really hoping for a third all Ford Racing final with JFR drivers but it didn’t work. I don’t know exactly what too place with my car. It shook and I had to pedal it. You want to be perfect and you want the car to be flawless but sometimes as a driver to win one of those pedaling. This is a historic race and that was an old school pedalfest. That is huge and it gives you a lot of confidence as a driver.”

In the final two of the strongest and quickest Funny Cars squared off. In the semi-finals both cars had posted low 4.0 elapsed times but as the sun came out the crew chiefs had to make some tough decisions. Hight was pleased he was able to contribute to a win after so many people had been supporting him on his road to victory.

“I wasn’t expecting that (smoking tires) at all. Jimmy said he was going to back it off because the track was warming up. We were trying to run 4.08 or something. I think he backed it off too much and it shook. You saw Morgan Lucas run 3.74 right behind us and that showed you how good the track was. We probably would have been better off to leave it like it was and try and run 4.03 or 4.04. It really doesn’t matter how you get here as long as you get the win light,” said Hight, a 25-time NHRA national event winner.

Hight credited his team for his dominance in final rounds and was quick to share the accolades. With the win, Hight moves into a tie for 7th (with Del Worsham) on the all-time Funny Car win list.

“The team I am on (is the key). I’ll be honest, racing (Jack) Beckman that was a big round. He is a great driver and that is a great team. In the final there was a lot of pressure because all the teams were behind me. All our teams are standing back there and they all helped get us ready,” said HIght. “They have given you the car and you just want to do your best. The Traxxas people were here and this is good for all sponsors like Castrol, Ford, Mac Tools and BrandSource. There are so many people back at the shop you just don’t want to let them down.”

Hight has now won multiple events in each of his seven seasons as a professional Funny Car driver but that kind of success does not make early round racing any easier.

“It was double the pressure having two days of racing. It was like two first rounds. I have asked Don Garlits if first rounds every get any easier and he has told me they don’t. Basically we had another first round today. I had all night to think about that semi-final race with Beckman. Once you get going it is nice to get that first round win of the day out of the way. We really had two first rounds this weekend.”

“You give it a quick look. You have to get the car under control and then take a look. You don’t want to look too early because then that could make you late getting back under power. You have to know if you need to stay with it or if the other guy is way out there, there is no reason to blow your car up. You don’t want to oil the track and kill it for the dragsters coming up behind you. At one point I got over near the center line and I backed off because I did not want to cross that center line. I eased back into it again. There is a lot going on in that sub five second race.”

“Usually the guy that smokes the tires first loses. If you smoke your tires second you have more momentum.”

Winning the Tire Kingdowm Gatornationals at Auto Parts Raceway at Gainesville was Hight’s 17th different event win and 15th different race track. “It was good to get John Medlen back in the winner’s circle in Gainesville. It was five years when we have a tragic accident and we lost Eric here. It means a lot to get him back in the winner’s circle here,” concluded Hight.

Mike Neff’s string of final rounds ended at two to start the season. After having the quickest and most consistent Funny Car on the property he was again consistent against Johnny Gray’s Service Central Dodge Charger but Gray was a touch quicker on the track. Neff left on the Funny Car veteran (.077 to .091 for reaction times) but at the finish line Gray’s 4.054 at 314.61 mph was quicker than Neff’s 4.083 at 311.92 mph.

For the weekend Neff, the Tire Kingdom Gatornationals defending champion, recorded times of 4.10, 4.08, 4.08, and 4.06 seconds in qualifying and in eliminations he posted times of 4.079, 4.076 and 4.083 seconds. That kind of consistency will win the Castrol GTX Ford Mustang a lot of races in 2012 for the driver and tuner he will leave Gainesville with the points lead.

Courtney Force has shown dedication to constantly perfecting her driving since her Traxxas Funny Car debut in Pomona this year for the NHRA Winternationals. Force has proven herself to her fans, her teammates, her competitors and her father, fifteen-time champion John Force. This weekend, she struggled in her Traxxas Ford Mustang Funny Car during qualifying, but managed to check off several items on her Funny Car driving to-do list.

The youngest Force daughter controlled her car through an aggressive pass at the beginning of the day on Saturday as the car shook at half-track and sent Force into the right guard wall. Force emerged unharmed at the end of the track, but suffered minor bruising. Despite challenges throughout the weekend, Force qualified in the No. 11 spot and had a positive outlook for Sunday’s eliminations.

“We had an interesting weekend. We had a pretty consistent car all the way up until qualifying on Saturday. We were trying to work out some new things and we had a problem where it just spun the tires. It caused us to bump up against the wall pretty hard so we just came back, set up my spare car to run and all of our teams kind of came over to get us put back together to get ready for the next round. We were able to run a 4.13 that session, which was my quickest of the weekend. It definitely helped to get down the track on that last run after brushing the wall. It definitely was a team effort and I’m really proud of the guys. I’m glad we could get the car from A to B for Traxxas, Ford, Castrol, Mac Tools, Auto Club, BrandSource, and Freightliner.”

The rookie of the year candidate lined up against Ron Capps and launched hard off the line, but had to pedal it and fought to keep the car from crossing the center line the entire way. Force posted a 4.630 ET at 272.72 mph to Capps’ 4.135 ET at over 306 mph.

“I knew I had a tough competitor having Capps first round. We had a hole out right when we left the starting line so it took me over into the center. I tried to pedal it hoping that maybe I would get lucky or something would happen and I’d be able to drive around him, but he had a good run; he ran a 13 (4.13 elapsed time) so it was a hard number to beat. We’ll be out there in Vegas and we’ll have everything ready to go again and I’m sure we’ll do much better,” said Force.

Force’s crew chief Ron Douglas explained the issues they had with the Traxxas Ford Mustang in today’s first round of eliminations. “We are working out of all different fuel cell components than what we have been running. It’s all brand new stuff on this car. It may take us a couple of runs to get it sorted out. We thought we had a handle on it, but we missed something, had a little too much fuel and dropped a cylinder so we’re going to fix it and we’ll be ready for Vegas,” Douglas said.

John Force, one of the most celebrated race car drivers in the history of NHRA, came into Sunday feeling pretty good after a series of three clean and straight passes down Auto Plus Raceway. His final qualifying shot, a 4.114 ET at 309.42 mph, secured Force in the No. 7 spot for Sunday’s eliminations.

The 62-year-old Force went up against rookie driver, Alexis DeJoria, in the opening round of eliminations. This was the second time Force and DeJoria have met in eliminations since the beginning of the season. The two faced each other in the first round in Pomona earlier this year. Force won and left DeJoria with the determination to even the score.

Force smoked the tires against DeJoria and put a 6.743 at 96.46 mph on the scoreboard and subsequently bowed out of the show. DeJoria ran a 4.115 ET at 309.27 mph, an almost identical run to Force’s best of the weekend.

“Alexis DeJoria did a great job; went down there from A to B. Worsham, I congratulated him because he had done well. We just smoked the tires and we were out,” said Force.

The John Force Racing team owner/driver doesn’t let the loss hold him back.

“The fans buy a ticket to NHRA. They deserve an autograph or a picture. I tell Courtney, just like I told Ashley, that when you’re in the dumps because you got beat, get out to the ropes and to signing autographs because half of them don’t know you got beat, they just love you. Get out there and they’ll make you feel better. They love us, they love our products and they buy them- all the Fords, Traxxas cars and trucks, Castrol oil, all of it.

“This wasn’t mine or Courtney’s day, it was Robert (Hight) and Neff’s (Mike). Our drivers and teams are on cycles out here because the transitions, tune-ups get off, drivers get off, clutch disks change, blowers can change, track conditions, but you have to adapt to it. Our teams do a great job of that.”