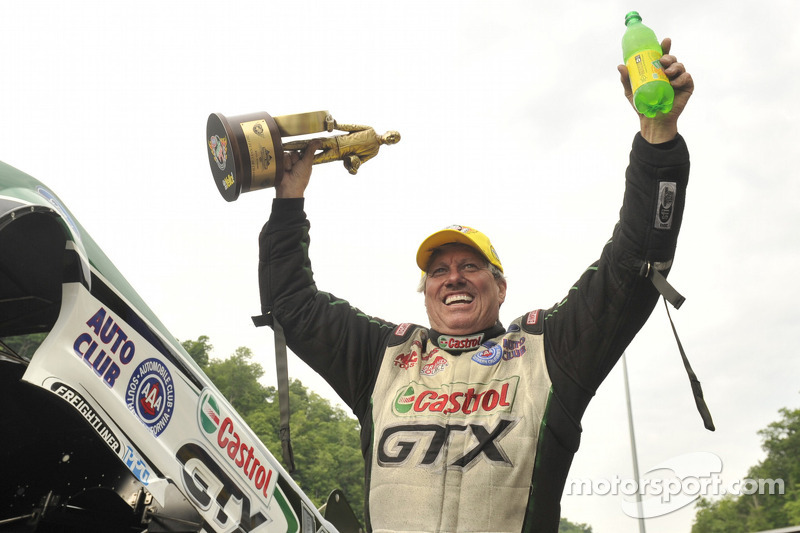 It was Force’s third win in a row and fourth final in a row. The last time Force won three in row was 2005 and it was the 15th time Force has achieved this feat. As the No. 1 qualifier Force had to outrun Gary Densham, Del Worsham, Alexis DeJoria and then Courtney Force in the final.

The semi-final race had the most drama for Force as DeJoria’s Patron Tequila Toyota Funny Car smoked the tires and then Force’s Castrol GTX Ford Mustang lost traction. Force pedaled his 10,000 hp Funny Car numerous times sashaying down the right lane but getting the win light with a time of 5.865 seconds. 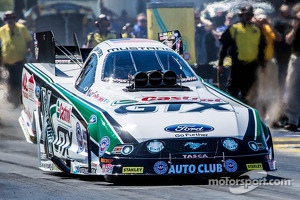 “I didn’t see her run. She must have gone up in smoke early. As much trouble as I was in only running five seconds. I almost hit the wall twice. It was like me and Cruz (Pedregon) in 1992 except then I hit the wall three times. There I was going sideways. I was hitting it (the throttle) again and then I was off it and then I would hit is again. I am thinking she is out there. You don’t want to think about it. If you look over you might drive over and she will run over you. She must have gone up on smoke bad and it took too much time to recover it. The biggest thing is she is just a great kid. What is cool is she is the future with my daughter and these young drivers,” said Force, who lost lane choice to Courtney Force in the final round.

In the final Force and his Jimmy Prock tuned Mustang blasted straight down their lane with a winning elapsed time of 4.062 seconds to Courtney’s equally impressive 4.085 seconds in a losing effort.

“I read an article this morning about being humble but after a day like today I would like to say it was me,” joked Force in the Las Vegas media center. “Jimmy Prock is unbelievable. The team he has around him is awesome. I used to race against his dad, Tom, who ran the Tom and Jerry Funny Car and the Detroit Tiger. He and Danny DeGennaro got the job done. Look at how those cars run side by side.”

“If there is anything I have done right is putting together this team effort. We pulled together when it looked like we were falling apart. I have great companies with me and they allow me do this. We won them a championship. We got a Mello Yello championship but next year I am going to try and win again. We are strong with Auto Club with Robert (Hight) and Traxxas with Courtney. My luck just turned around in a year when I needed it to sell corporate America. I remember Dale Earnhardt used to say ‘I’ll do the winning and you marketing guys sell me.’ I never had the nerve to say that but that guy was a winner so he could do it. I have had luck on my side the last three races.” 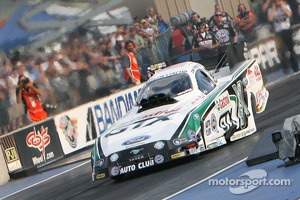 Force was led to victory by an outstanding team effort with crew chiefs Jimmy Prock and Danny DeGennaro. Prock became the third Funny Car crew chief to win NHRA Funny Car championships with two different drivers (Robert Hight and Force). He joins Austin Coil (Frank Hawley and Force) along with Mike Neff (Gary Scelzi and Force) as a multiple winner. The unassuming Prock was thrilled with the outcome but deferred credit to his entire team.

“It felt great to see that win light come on and know we had clinched the championship. It was an awesome feeling to be able to get John another championship. He is the greatest drag racer ever. It is just a great feeling. We were down for a while but we worked hard and we stuck together. We got rewarded for it,” said Prock.

“Most of these guys that are working on this Funny Car have been here since 2005. We have been through the ups and downs. Everybody hung in there and we worked together. They work really hard at what they do. This is a tough gig working on one of these race cars. Your heart and soul goes into them to be good at it. When you can win it is a great feeling.”

Courtney Force made her seventh final round appearance today at the NHRA Toyota Nationals at The Strip at Las Vegas Motor Speedway, but lost to her father in a heated side-by-side race.

“It’s pretty cool to say that the last time we were here in the spring we were No. 2 qualifier and got a runner-up finish as well. Our Traxxas team is good here at The Strip at Las Vegas Motor Speedway and I think we’ve done a pretty good job of showing that. We had a great race car all weekend. Ron Douglas and Dan Hood gave me a great Traxxas Ford Mustang Funny Car to drive and, you know what, I’m happy with what we accomplished today,” said Force.

The 25-year-old sophomore sensation dismissed Tony Pedregon, Robert Hight and 2012 Funny Car Champion Jack Beckman before going up against her father in the final round. The female driver also posted top speed of the meet and set the new track record with a 319.98 mph run.

“We couldn’t get the job done in the final. It was definitely a tough race up against my dad. I was a little bummed at the top end. I really thought we had the win, but he just outran me. We had lane choice and I thought that would help us, but he had the better car and that’s all there is to it.”

Courtney and her father are now tied 4-4 in eliminations since the start of her Funny Car career in 2012.

“I’m happy for my dad and his Castrol GTX team. It’s huge for John Force Racing for him to get that win and clinch his 16th championship.”

“I’m looking forward to Pomona. I think we’re going to leave here and a really good note and that should help propel us into next weekend and get us into a good rhythm so we can go rounds and pick up more points. We moved up two spots this weekend, which is huge. We came close to moving up three spots which was our goal, but I’m happy and definitely proud of my Traxxas team because these guys have worked really hard,” said Force.

Courtney Force and teammate Robert Hight will be battling for the No. 2 and No. 3 spot in the Mello Yello standings with one race left. Hight and his Auto Club team qualified 10th and took out Cruz Pedregon before losing a close race to Courtney Force in the second round. Hight held onto the No. 4 spot in the points and is only 54 points out of second place in the Mello Yello standings.

“We accomplished one goal today and that was to win the 18th Funny Car championship for John Force Racing. I said all along if I couldn’t win then I wanted John to win this season. Now Courtney and I will be battling to finish second and third. I can’t wait to get to Pomona and I know Mike Neff will give me a great Auto Club Funny Car. JFR won the first race at Auto Club Raceway this season and I would love to win the last race this season,” said Hight, the 2009 Funny Car champion. It was also an impressive day for Rookie of the Year candidate Brittany Force as she won for the 8th time this season in the first round and now has the most round wins of all the Auto Club Road to the Future Award contenders. The driver of the Castrol EDGE Top Fuel dragster took out Countdown and championship contender Spencer Massey in the first round. Previously she had lost to the Texas driver in their previous four meetings this season. She dropped a second round match-up with Top Fuel points leader Shawn Langdon.

“I am excited to be heading to Pomona. I think this Castrol EDGE team has some momentum. It was great to get a win over Spencer. I am so proud of my dad and this was just a great day even though we didn’t go as many rounds as we would have liked,” said Force.