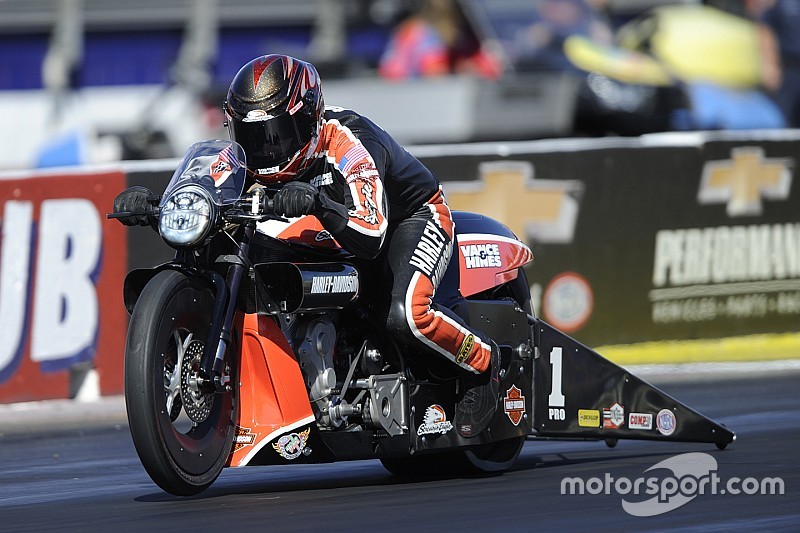 It's been dominated in the past few years by the Vance & Hines Screamin’ Eagle Harley-Davidson duo of five-time champion Andrew Hines and three-time champ Eddie Krawiec.

The past two years have highlighted Hines’ career, as he swept consecutive titles in hard-fought competition between the two V&H riders and upstart Jerry Savoie on a Suzuki, whose motorcycle was initially developed by Don Schumacher Racing and has been highly modified since then by his team, led by tuner/engineer Tim Kulungian.

Can anyone stop the Harley-Davidson duo

As they gather for the third overall Mello Yello Drag Racing contest of the 2016 NHRA campaign at Gainesville (a contest some purists consider the true start of each season because the Pro Stock Motorcycle and J&A Pro Mod cars are on-site), it remains to be seen whether someone, anyone can stop the Harley-Davidson duo from continuing to rampage their class.

Last year Hines and Krawiec each won four races, thereby dominating half the campaign, while Savoie had a breakout year, earning three Wally trophies. The alligator farmer was in contention through to the penultimate contest of the year in Las Vegas, but a foul at the line in the final round cost him any momentum.

Two-time champ Matt Smith was fourth last year - without a win to his name and a Victory motorcycle to develop as he ran through the 16-race grind - and Hector Arana Jr, riding a Buell, took two wins for fifth.

All of these riders, together with the balance of the top 10, will be on-site at the Gators next week, trying to get inside the head of Hines, Krawiec and their corps of engineering talent, led by Andrew’s brother Matt Hines, himself a three-time Pro Stock Motorcycle champion.

Still business as usual for Hines

For Andrew Hines, that’s just business as usual. HIs team had “a very productive off-season,” he said. Although he hasn’t been on a race bike since the finals at Pomona last November, “We spent most of our time working on developing horsepower on our dyno,” at the V&H shop in Brownsburg, Ind. The team feels it’s “not conducive for us to drive 1,000 miles or more down to Florida or southern Georgia to go test. We focused more of our time on research and development.”

Like most in the 26-car field vying for one of 16 spots in Sunday eliminations at the Gatornationals, the Vance & Hines crew will test the week prior to this race at Valdosta, Georgia. It’s a tradition. “We try to put all our eggs in one basket for this first test session and see what shakes out for what we like. Worst case, we always keep a couple of engines like we had at the end of the previous season; we have a couple of good backups and we’ll have four brand new ‘bullets’ ready to go. We’ll come out shooting in Gainesville,” Hines said.

The big challenge for this NHRA class is the 200-mph barrier, one that Hines, Krawiec and their competitors have approached on multiple occasions. Using a different spec H-D motorcycle four years ago, Hines tested at Valdosta with a 199.85 pull and he ran 199.23mph in a race at Englishtown, NJ in 2014. The mark isn’t far away but the conditions have to be right to take that leap into the “2’s”.

There were some close calls last year, notably in the beginning of the season when the weather is cooler. Hines cited “notoriously fast runs in Charlotte where you’ve got a semi-downhill track and good weather there early in in the March, April time frame. It could be one session (with ideal conditions) where you might see two, three, maybe even four motorcycles run over that 200-mile-per-hour mark, and it might just stack up on who goes out first that qualifying session,” he noted.

“It could be as exciting as that or you might see maybe the last two bikes of a certain session put it up side by side. That would be pretty spectacular,” Hines mused. “We are all looking for it. It’s just a matter of all the stars aligning correctly and finding that couple horsepower that we all need to push us to that next threshold.”

Everybody in the PSM field wants to be first to that 200-mph barrier and, like Hines, many are preparing by getting developing their motorcycles, seeking the sleekest helmets, tucking in as tight as possible to the bike and ridding themselves of any extra pounds in advance of the upcoming season.

With only a single win at Gainesville, in 2004, Hines is aching to start the season at the top of the points list. “it’s nice to be the points leader after the first race,” he said. “It takes a little pressure off because the hardest win to get is the first one of the season. I’m feeling pretty confident about what we have done here with our Harley in the off-season and we’re going to go test and hopefully reap our benefits.”

Beckman, Crampton, Line and Krawiec are no. 1 qualifiers at NHRA Gatornationals