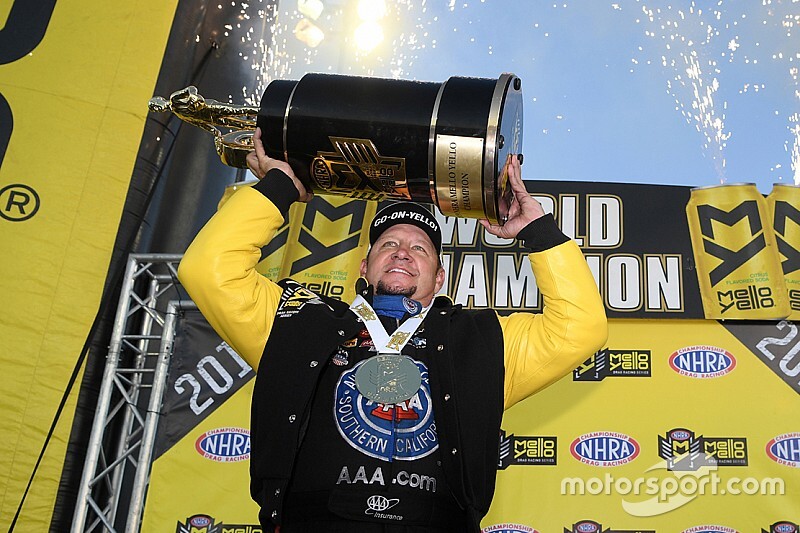 At his home track, Funny Car’s Robert Hight raced to his third career NHRA Mello Yello Drag Racing Series world title and second in three years by advancing to the final round of the 55th annual Auto Club NHRA Finals at Auto Club Raceway at Pomona.

Hight knocked off championship hopeful and No. 1 qualifier Matt Hagan with a strong run of 3.977-seconds at 324.59 mph in his Auto Club of Southern California Chevrolet Camaro SS to reach the final, where he just needed to not lose any points. In the final, Hight performed a massive burnout to the delight of the fans before the car shut off, handing him the championship during what was the best season of his career.

“The most important run of my life was in the semifinals against Matt Hagan,” Hight said. “When it comes down to one run to win a championship, how will you perform? My heart was beating out of my chest, but we got it done. This has just been the steadiest year I’ve ever had and that’s a real tribute to this team.

“It’s amazing and I’m the luckiest guy in the world to drive this Funny Car. To win six races, lead the points with the competition level in Funny Car, I’m going to cherish this championship the most because we earned it. We did our job.”

Hight, who becomes just the fifth driver in class history to earn a third title, beat teammate John Force and then Shawn Langdon to set up the showdown with Hagan, advancing to his ninth final round in 2019. His season included a career-best six victories, giving him 51 in his career, while Hight was consistently impressive all year, leading in points at 23 of the 24 races.

After Hight’s car shut off, Beckman took advantage in the final round, going 3.920 at 323.27 in his Infinite Hero Foundation Dodge SRT Hellcat to close his year in style. Beckman finished second in points with the win, just eight behind Hight, claiming his second win in 2019 and 30th in his career.

“I’ve never won Funny Car at Pomona, so that was awesome,” Beckman said. “If you win at (the World Finals), the off-season is going to be fantastic. They’ve given me such a great racecar lately, and finished a solid second, ended the year with a win and we’ve got a phenomenal car. Things are awesome right now. I’m feeling on top of the world, to be honest with you.”

Torrence clinched his second straight NHRA Mello Yello Drag Racing Series Top Fuel title by advancing to the semifinals and making it down the track during that round on Sunday. In a massive second-round matchup with 2017 world champ Brittany Force, Torrence pulled away at the top end, going 3.749 at 326.48 in his CAPCO Contractors dragster. It followed a heated first-round matchup with Cameron Ferre, where Torrence, the No. 1 qualifier, won with a 3.734 at 327.82. The team rose to the occasion against Force, performing big in another clutch situation and making a clean pass in the semifinals to win back-to-back titles.

“It’s been really special to be part of a team that goes out and has the success we’ve had,” Torrence said. “It’s really special to win one championship, much less two and to do it back-to-back. I knew what we had to do and we were going to decide who had the best chance at it in the second round. The guys prevailed and gave me the racecar, and I did the job I needed to do when I needed to do it. Our group of guys has been together for years and that continuity is what has been a key recipe to our success.”

It capped off another remarkable season for the Texan, as Torrence was again in control for most of the year. He finished with nine Top Fuel wins, including a dominant stretch of eight wins in a nine-race span. Torrence, who won 11 races a year ago en route to his first title, also advanced to 14 final rounds in 2019, as he now has 36 wins and 55 finals appearances in his career. His playoff victory in Charlotte gave him the points lead for good, as Torrence’s path to the championship included three finals in the Mello Yello Countdown to the Championship.

Kalitta came up only three points short of Torrence, just missing out on his first Top Fuel world title, but the veteran did close out 2019 with a victory in his Mac Tools dragster. He went 3.716 at 332.67 to beat Kalitta Motorsports teammate Richie Crampton in the final round. Kalitta earned his third victory of 2019 and 47th in his standout career, also sweeping both races at Pomona this year. He knocked off Terry McMillen, Justin Ashley and Leah Pritchett to reach the final round.

“It was fun, for sure,” Kalitta said. “I was real proud of the effort we put in today. We gave it all we could and it’s definitely still on our list to win a championship. I was real proud of my guys today coming out of here with a win, and I love running here in Pomona. It’s a great team effort we got going on here, so I’ll keep digging.”

In Pro Stock, Enders was cool under pressure on Sunday, capping off a strong performance in the playoffs by winning her third world title in Pro Stock. It didn’t come easy, as Enders faced off with Greg Anderson in the opening round of eliminations, slipping past the veteran with a 6.570 at 210.41 in her Melling Performance/Elite Motorsports Chevrolet Camaro. She clinched the championship a round later on a holeshot, knocking off Chris McGaha with a 6.597 at 209.69, giving Enders a third title after back-to-back championships in 2014 and 2015.

“This one means a lot because of the valleys we’ve been through,” Enders said. “It was a challenge for us and I’m thrilled. It’s just an awesome feeling to be back on top, and it’s the reason why you never give up. Today ended up being a great day with us locking up our third championship and my teammate, Jeg Coughlin, winning the race and solidifying the second position. For everyone at Elite Motorsports to take home the top two positions in NHRA Pro Stock, it’s a huge thrill for us. We take a lot of pride in what we do and it paid off this year. I’m just really proud.”

By winning a third championship, Enders ties Shirley Muldowney and Angelle Sampey for the most titles in NHRA history by a female. On the strength of two wins and three No. 1 qualifiers in the Mello Yello Countdown to the Championship, Enders also became the lowest seed to win a title in Pro Stock history after starting from fifth. She heads into 2020 with 25 career wins.

Coughlin’s year ended on a strong note, picking up the Pro Stock win over Fernando Cuadra with a 6.558 at 210.54 in his JEGS.com Chevrolet Camaro. It is Coughlin’s second win in 2019 and 63rd in his career, capping off a memorable day for Elite Motorsports as well. Coughlin, who was also the No. 1 qualifier, beat Joey Grose, Aaron Stanfield and Bo Butner to reach his 111th final round, taking plenty of momentum into the off-season.

“It was a tough raceday and there was a lot of emotions going on, but it was a great weekend,” Coughlin said. “It felt really good today to bring home the win, and a double win with Erica bringing home the championship and with us securing the No. 2 position. To have 2020 be the 50th year for Pro Stock, it’s going to be exciting. I think the class right now is looking extremely good.”

On a wild day in Pro Stock Motorcycle, Hines ended up with his sixth world championship in the class, earning the title after Jerry Savoie lost in the final round to Salinas. Hines’ day didn’t go as planned at all, losing on a red light in the opening round against Salinas when he just needed one round win for the title. But he had a big enough cushion over Savoie and Matt Smith to finish with the title for a sixth time on his Vance & Hines Screamin’ Eagle Harley-Davidson.

“I put my team in such a bad situation and I chalked it up that we’re done,” Hines said. “It was just absolute insanity. It was a total, utter disappointment on my behalf and a bitter pill to swallow. This was one of the craziest days ever and the final round was absolutely astonishing. But the reason why we’re here right now is what my team did all season long. It wasn’t just this race, it was what my guys did all year.”

Hines was dominant throughout 2019, putting together the best season in his standout career, setting the E.T. mark in the class and winning a career-best eight races. The winningest driver in class history now has 56 career victories and he also advanced to 10 final rounds this year.

Salinas’ day ended with her first career Pro Stock Motorcycle victory on her Scrappers Racing Suzuki, going 7.464 at 180.81 in the final round after Savoie broke. It capped off an unbelievable day for the rookie, which started with the win against Hines after he went red. She followed with wins against Steve Johnson, defending world champion Matt Smith, who broke after needing to win the race to clinch the title, to reach her first career final round.

“On Saturday morning, I was just fighting to qualify and I never thought I would be able to pull this off,” Salinas said. “To be here right now in this moment, it’s not something I would ever thought would happen this soon. On raceday, anything can happen. Sometimes consistency is all you need to win, and I’m just there to race my race. I felt very lucky and when it’s your day, it’s your day.”