Gary Scelzi in the spotlight, Part I 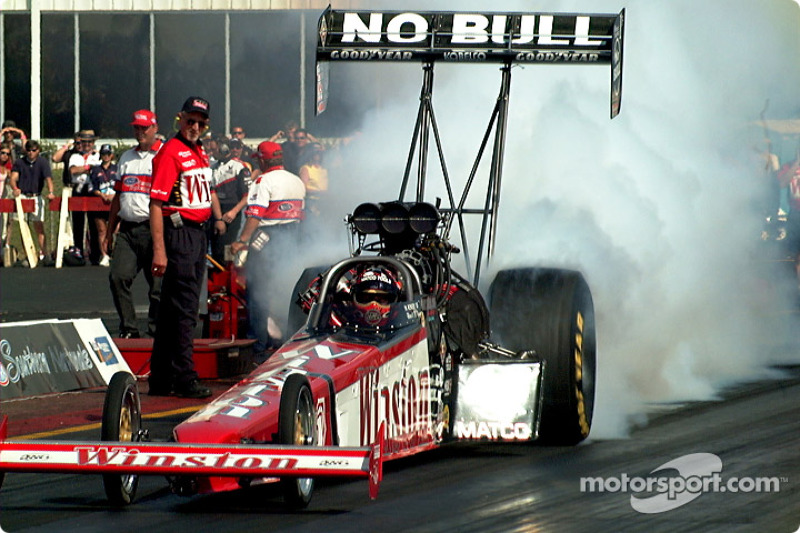 Gary Scelzi Part 1 of 2 Who would have ever thought a three-time Top Fuel champion like Gary Scelzi would sit out nearly an entire season? After racing in the first seven events of 2002 in a Funny Car, Scelzi and longtime crew chief Alan ...

Who would have ever thought a three-time Top Fuel champion like Gary Scelzi would sit out nearly an entire season? After racing in the first seven events of 2002 in a Funny Car, Scelzi and longtime crew chief Alan Johnson decided to end their association. Bruce Sarver stepped into the driver's seat and Scelzi spent the rest of the year trying to find a new ride. Mission accomplished. Scelzi now drives the second Oakley-sponsored Funny Car in the Don Schumacher Racing program. He's behind the wheel of the Oakley Dodge Stratus R/T with a new tuner making all of the wrenching decisions. In this Q&A session, Scelzi talks about what it was like to be on the sidelines, what he wants to prove, and why he seems so darn happy just one race into the season. 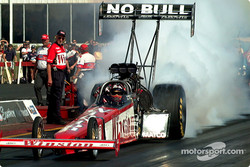 Scelzi: Winning races in Funny Car. I want to win and I want to win early. I want to establish this team. We have everything we need to win. We have the brains, we have the money and we have the talent. I think we are going to jell well together. I love (crew chief) Mike Neff already. He is so laid back, he is so cool and he is very methodical. With Dan Olson overseeing this whole operation, and having Lee Beard with Whit Bazemore, Phil Shuler with Scotty Cannon and Wes Cerny with Tony Schumacher, I really think the entire Don Schumacher Racing organization has some of the best minds in the business. If we can keep everyone level-headed, I think it is endless what we can do. I think that is something that (John) Force has done so well in his group. He has meshed Austin Coil, Bernie Fedderly, John Medlen, Dickie Venables and Jimmy Prock. Those guys are all on the same page. Even though John is the guy in that camp, Tony Pedregon nearly unloaded him. If we can keep that focus, we can help the dragster team and Tony Schumacher and we can help Scotty even though he is running a different body and combination. All of our drivers get along with each other and I think the crew chiefs are OK, they just have to develop a trust between them. The sooner that happens, the sooner we will be a force to reckon with. I don't know if it is going to happen in a month, six months or a year. It looks good right now, and it is just the beginning.

Q: What is the best thing about having a four-car team, nonetheless a three-car Funny Car program?

Scelzi: No matter if we are running the same combination or not, it is still a car going down the race track. When you see and start to know how the other guy tunes, if he smokes the tires, you will have an idea on how to compare your data to his. If one car can get through the middle and another can't, we will be able to go over there and look at the data and learn a few things. It doesn't matter what is under the hood, two cars won't run the same no matter what. But, I also know that different guys run different timers in different ways and some are aggressive here and not so much there. As long as everyone keeps an open book, we can all take advantage of that. We have the talent and the want. We just have to get that chemistry working.

Q: What are the disadvantages of having a four-car team?

Scelzi: There is always the possibility of an ego getting in the way. One ego can spread like a cancer in the pits. You need someone to help the mix and not let anyone from the outside cause any problems. If they see us starting to get strong and we are building a program, there will be rumors, there will be things that can try to dismantle a team. I think that if we are all on the same page and if Bazemore says something or if Neff hears something, we need to face each other, be honest and believe our teammates. If we keep our house clean, and not let any strangers screw it up, I honestly believe that we are going to be players. This is a great opportunity for all of us and I think we all know that.

Q: What do your bring to this organization as far as your personality?

Scelzi: I think I am a pretty laid back guy with a lot of energy. I am like the town clown. I can definitely hang with Scotty. I have known Scotty since he started and we have gotten along from the beginning. Bazemore used to be my teammate. People get on Bazemore because he speaks his mind and I think there is no better person than Whit. We went to a dinner last year for Matco Tools in Cleveland, Ohio. Bazemore was almost as funny as I was. How about that? He was close. He was stealing the show. It was really refreshing. Bazemore is a great guy but Bazemore says what he thinks. Whether you love him or hate him, he is never going to lie to you. If he thinks your shirt is from the '60s, he is not going to say, 'Hey, nice shirt.' With Bazemore, what you see is what you get. I don't see any conflicts coming out of this group. Tony (Schumacher) and I used to hate each other when we were racing against each other (in Top Fuel), but we would always be able to have a beer after the race. Tony and I got along really good, especially after the crash after we had both been on our heads. We both care about each other even though we try not to show it. Tony was the first one to run to my car and I was the first one to run to his car during the crashes. All bull aside, when it is all laid out, we are all probably more family than we would all like to admit.

Q: What do you personally want to accomplish in 2003?

Scelzi: I want to earn the respect of the Funny Car drivers. When someone pulls next to me, I want them to say, 'Oh no, I've got Scelzi' instead of 'Oh yes, I've got Scelzi.' I want them to feel the same way about me as when I ran the dragster and won three titles. I want to know that I have a crew chief that is going to run this thing as hard as it will go. I want a crew that is not going to make mistakes and to know that their driver is going to be right there for them. Sometimes a driver might be able to steal one for them. I want to know that we have all of that in our corner.

Q: How did sitting out most of the 2002 season make you a better driver?

Scelzi: I don't know that it made me a better driver. I never let winning races get in the way of how I thought about myself. I always tried to pick up on the best and copy them. Some of the best drivers I have ever seen were Gary Beck, Pat Austin and Dale Pulde. I have always watched great guys. Larry Dixon in the last few years has really come into his own. I watch Tony Pedregon and I watch John Force. I watch guys like that because there are certain times when guys really have something going for them and their confidence level is high. I don't care what people say about me as long as I know in my mind that if I won five races in a row, I am going to know that there is someone hungrier than me out there so I can't lose that burning desire. I can't think I am that good because the minute you think you are good is the minute you are history. The one thing I learned when I was sitting out in 2002 was how fortunate I was with Winston as my primary sponsor during my Top Fuel years. I had a major sponsor and things were clicking between (former crew chief) Alan Johnson and myself. I knew it was good then, but when it is over, you think to yourself that it may never happen again. I may never have that closeness again. I didn't ever think of it as a job. We laughed, we cried, we partied. We all worked very well together. That is what I am looking for now. I don't think I am premature, but honestly, I am so comfortable with this group. I am so relaxed. One thing about (Oakley founder, CEO) Jim Jannard - I've known him for a long time - but honestly when I went to his office in January, I was so nervous. I have never been nervous around Jim, but now I am going to work for the man. He just has this soothing way about it. When you start to get nervous, he senses it and he will talk to you like one of the boys. He always has. He has a very unique way about him. When it comes to (team owner) Don Schumacher, when I was hanging out at the track during the four months that I didn't race, I was messing with Don like I would a buddy. I wasn't working for him and I never thought I was going to get hired by him anyway. We have a good relationship. I know where everybody is coming from.

Q: Why did you and Alan Johnson sever your working relationship?

Scelzi: It was just an unfortunate thing. Alan and I had a great conversation just a couple of weeks ago. I don't know and I am sure that Alan doesn't really know what happened. I think that we just lost the communication between us. But believe me, we are friends. I wish him the best and I know that he wishes me the best. We had a great time talking. We both got caught up in the rumors too. At the time, we didn't talk to each other about that, but we do now. So we have decided to be honest with each other and if something ever comes up, just talk about it instead of believing all of the rumors. We should have done that in the beginning. I am at peace with Alan and he is at peace with me and who knows, we may end up together somewhere down the road. You never know.