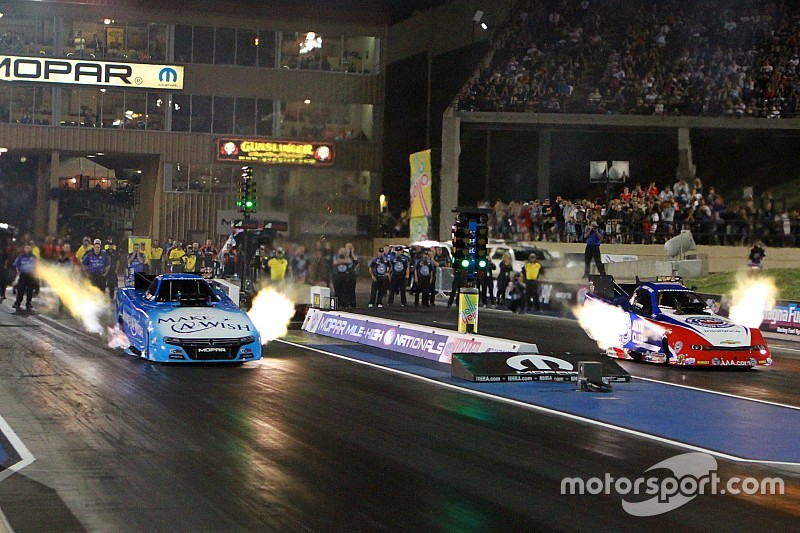 Why? Because a Funny Car is exceptionally difficult to drive with 10,000hp, a front-mounted engine and a far shorter wheelbase than a Top Fuel dragster. When an explosion occurs – and they do - Funny Car bodies have been known (even with tethers) to fly off, leaving a driver at the mercy of the conditions and with no aerodynamics to assist him or her down the 1,000-foot dragstrip.

As you'd imagine, getting in excess of 10,000 horsepower to behave is no easy task – not for the driver, not for the crew chiefs and not for the group that prepares the car for each round of competition.

Tommy Johnson Jr. is starting his third straight year with Don Schumacher Racing (DSR), running the Make-a-Wish Dodge Charger R/T under the watchful eye of third-year crew chief John Collins and assistant Rip Reynolds. This trio finished third in the championship in their first year together and did it again last year, posting two victories and six final-round appearances. So what works for this group?

“Our team was very consistent,” Johnson says. “We performed well and did it consistently every week. First round losses are killer and we only had two or three of those in 2015.

That’s the kind of momentum a team will use to its advantage once the season gets underway as it does today in the 56th Circle K Winternationals on the Auto Club Raceway at Pomona, the NHRA’s ancestral home.

“We have the same team with no changes whatsoever,” continues Johnson. “We’ve picked up that continuity and chemistry we had going and came out of pre-season testing looking like we never quit racing.

Referring to last weekend’s test session at Wild Horse Pass Motorsports Park outside Phoenix, Johnson says: “That was probably the most productive test session we’ve ever had; we were able to test a lot of parts and, quite frankly, the car never went to the starting line the same twice.”

Twice in his career, Johnson has had to vacate the driver’s seat and it’s helped him appreciate even more the ability of DSR to run him full season. However, he admits that his spells without a ride from 2009 to ’11 allowed him to do track-prep work and in which he learned “a few small things” that now help him when he’s racing.

“I don’t know that they’re huge advantages, they might be small ones. But there are definitely some things you learn and file in the data bank. You never know when you might need them.”

Veteran Tim Wilkerson has been filling his racing data bank since joining the Funny Car ranks in 1996. He drives a Ford Mustang – the only one on the circuit running full-time this year – for Levi, Ray & Shoup, his longtime financial partners. Wilkerson’s is a smaller, one-car operation facing mega-teams like four-strong Don Schumacher Racing and John Force Racing (JFR), which has three floppers, for team leader John Force, daughter Courtney Force and son-in-law Robert Hight.

Ford effectively left NHRA’s pro ranks after the 2014 season, leaving Wilkerson as the only wild pony rider in the category. He continues with the brand for a few reasons: he’s got plenty of flopper bodies and they’re in good shape.

“They’re a successful aerodynamic body,” Wilkerson explains, “and that’s the first thing I think about. There’s no reason to get rid of them and it would be good, if Ford decides to put their toe back in the NHRA waters, if they already had somebody they could pick up.

“Now we have those two super-teams that are already affiliated with two different manufacturers (DSR with Dodge Chargers and JFR running Chevrolet Camaros). Kalitta’s guys are with Toyota (driver Del Worsham won the championship last year), so that leaves a little bit of a door open for me if Ford should come back in - and I hope they do.

“I don’t really bug them but I make sure they know I’m around,” he adds with a sly smile.

Last year T-Wilk added the estimable Richard Hartman to his tuning arsenal after Hartman left Terry McMillen’s Top Fuel outfit. Coincidentally, as drivers, the two of them entered the Castrol 4-second club, initiated back when the category ran in the quarter-mile and doing four-second passes was no walk in the park.

Hartman has made big changes to Wilkerson’s life, as the driver himself acknowledges.

“Richard knows racetrack conditions and how they affect the car running well; he knows how he can convey to me what I’m looking at. And when we make mistakes, we both talk about it and we’re over it, no matter whether it’s my mistake or his mistake. We’ve kind of got the same demeanor and I think that helps too.”

Hartman’s presence allows this owner/driver/tuner to place more emphasis on his competition and less on extraneous items at the track. “Believe me, I’m glad I have him,” concludes Wilkerson, “it keeps my stress level down. I still do the tuning, but I’ve got to say he’s a great sounding board because he’s been here, seen it all and done it all.”

Until he got into the Countdown in 2015, Wilkerson was having a great year, but then he started trying different things to go quicker and it got him in trouble. Wilkerson’s pre-season test in Phoenix last week was a good one, he said, but added that it was “pretty much ‘Star Wars’ out there. The track was cool and good for speeds; here it’s going to be 85 degrees, so we’re back to reality.”

One guy totally bullish on the upcoming season is Robert Hight, president of John Force Racing and driver of the Auto Club Chevrolet Camaro, tuned by Mike Neff, the acknowledged leader of the JFR “brain trust.” The 2009 Funny Car champion finished sixth in last year’s standings, best of the JFR stable of John Force (seventh last year) and Courtney Force, who failed to make the Countdown.

As JFR’s prez, Hight makes decisions that affect not only the three Funny Car teams but also Brittany Force’s Top Fuel squad. Over the offseason, Hight acquired the services of tuner Brian Husen and his former Top Fuel team owner Alan Johnson. Husen is now the tuner for Brittany Force while Johnson is lending his exceptional expertise to the team. Already Hight’s been pleased with the outcome.

“When Alan became available it made sense to try and get him, and so far it’s working out great,” Hight observes. “Brittany made a lot of good runs last weekend and our Funny Car also made some really good runs. We believe the focus we’ve put on performance this winter is already paying off.

“I put a lot of stock in testing, especially the last day of the test. Of the last five runs we made, the slowest was 3.93 seconds, and we made it down the track those last five passes. The first couple of days we struggled a little bit, but Mike Neff stuck to the game plan of trying to keep our car fast early and we figured out how to make it go.”

While it’s not a record, Hight ran the fastest Funny Car ET of the test.

“When I was only less than a hundredth away from being low ET on the event, and only one dragster ran faster on top speed, I feel that’s pretty successful and shows where we need to be.”

Hight has opted for year on year continuity in his own team, as he has for the past two seasons. He explains, “[That way] we can try things with the racecar. We’re not training new crew, or new employees so we can hit the ground running out there.”

Three drivers; three very different teams but the same intent to succeed permeates the whole Funny Car field. Will these three guys meet their own expectations over the course of 2016? We start getting answers this weekend at Pomona, California.