It was her first win of the season and fourth of her career.

GLENDORA, Calif. -- Funny Car driver Courtney Force earned the 100th victory for female pro drivers in NHRA history Sunday at Heartland Park Topeka (Kan.) during the NHRA Kansas Nationals. It was her first win of the season and fourth of her career. She was the event No. 1 qualifier and defeated Dale Creasy Jr., Jeff Arend and Tommy Johnson Jr. in the first three rounds before outrunning two-time world champ Cruz Pedregon in the final round to take the win. She drove her Traxxas Ford Mustang to a final round performance of 4.148 seconds at 306.46 mph to take the win. 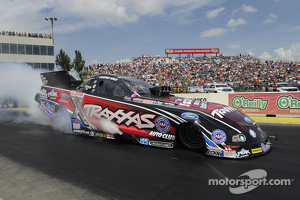 She is one of 14 female racers who have won NHRA Mello Yello Drag Racing Series events in the last 38 years, including seven in Top Fuel, four in Funny Car, three in Pro Stock Motorcycle and one in Pro Stock (Melanie Troxel won races in both Top Fuel and Funny Car). Three-time Top Fuel world champion Shirley Muldowney was the first driver to win an NHRA pro race, claiming the national event title at Columbus, Ohio in 1976. Pro Stock Motorcycle racer Angelle Sampey, also a three-time world champion, has earned the most victories among the 14 women, claiming 41 Wally trophies during her distinguished career.

“It’s huge. You can see the emotions on my face after the loss in the final round last weekend. It’s a big deal. It’s a milestone for women, and every girl out here wanted to get it. Every girl put their heart out into it. I was crushed last weekend, because I thought that opportunity would never come around again. I’m still trying to soak it all in right now.”

“This is for all the girls out there in any type of sport, any motorsport. It’s an exciting day for us. It’s an honor to be No. 100 on a list of the legends like Shirley Muldowney, Angelle Sampey, Melanie Troxel, Erica Enders-Stevens, Shelly Payne, Ashley [Force Hood, sister], Alexis DeJoria, there are so many great names. My sister Brittany is so close. It’s an honor to be a part of it. We’ve hit 100, but there’s 100 more to go.”

“I almost screwed up on the starting line as a driver. I almost failed in my job. I was so nervous. The pressure was through the roof. I went up there, and all I could think about was how Cruz holeshotted Robert and that I didn’t want to do that in the biggest moment. There was a lot on the line. I wanted to roll in pretty deep on the pre-stage so my stage bulb will be nice and deep. I screwed up and lit both before he was even pre-staged. I thought, ‘Oh, my God. I’m about to screw this up for myself.’ I let off the clutch when he lit the pre-stage bulb. Luckily, I left when I was supposed to. I apologized to him. I sure as heck wasn’t trying to screw him up.”

“I’m so proud of my Traxxas Ford Mustang team. I have to thank all of my sponsors: Castrol, Ford, Auto Club, Brand Source, and Mac Tools. When my dad and Robert went out, you could see all the colors from their teams coming over to help us out. My crew chiefs, Ron Douglas and Dan Hood, have given me a good, consistent hot rod all weekend.”

A $4 part costs Jack Beckman a chance at a win