Force, Kalitta and McGaha secure No. 1 qualifiers in Phoenix 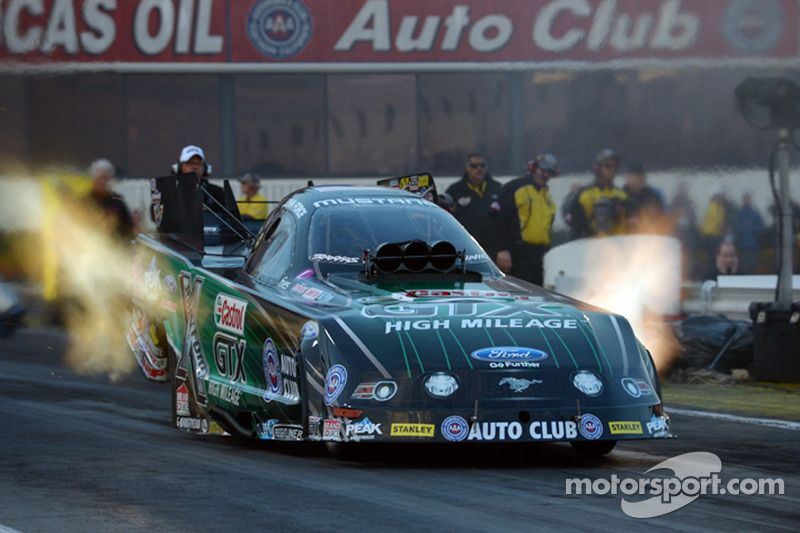 Force, the 16-time world champ and current series leader, claimed his second consecutive No. 1 position of the season and fifth in a row dating to last year on Saturday with his Friday track record performance of 3.990 seconds at 317.79 mph at the controls of his Castrol GTX High Mileage Ford Mustang. It is the 148th No. 1 of Force’s career and his eighth at the multi-purpose motorsports facility near Phoenix. 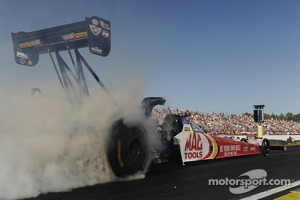 "It doesn’t matter who you’re racing,” said Force, who won the season-opening race two weeks ago in Southern California. “The baddest kid or the worst can win if your car gets down the racetrack.”

Force will face Jeff Diehl in the first round of eliminations tomorrow as he goes for his 140th career victory and his ninth Phoenix win.

Tommy Johnson Jr. fell to Force at the season opener in Pomona and returned to Phoenix in style, securing the No. 2 spot with a 4.029 at 316.08. He will face two-time Funny Car champ Tony Pedregon in the first round of eliminations.

Robert Hight, Alexis DeJoria and Del Worsham round out the top five in Funny Car qualifying.

In Top Fuel, Kalitta’s Friday performance of 3.735 at 327.74 was good enough to secure his second consecutive No. 1 qualifying position of the season and at this event. It is the 38th career top qualifier for Kalitta, who was runner-up to winner Khalid alBalooshi two weeks ago at Pomona, Calif.

“It’s been going good,” Kalitta said. “We’ve just been trying to keep our heads down and do the best we can. We will just see if the win light can come on in our lane.”

Kalitta will try to go one round further when he opens the race Sunday against Scott Palmer. He is searching for his first win since Dallas last season.

Tony Schumacher struggled in Pomona, qualifying 10th and falling in the first round. Determined to have a better start, the seven-time world champ was able to pilot his U.S. Army dragster to second with a performance of 3.757 at 325.74. He opens against Terry McMillen in round one of eliminations.

McGaha earned his first career Pro Stock No. 1 qualifying position with a performance of 6.530 at 210.64 in his Chevy Camaro. Utilizing equipment purchased from 2009 Pro Stock Champion, McGaha was thrilled to lead the field in Phoenix.

“Being number one is really hard to explain,” an ecstatic McGaha said. “This really hasn’t sunk in yet.”

The Texan will open against Australian Shane Tucker and will be gunning for his first win. Despite this being only his second time he has qualified in the top half of a Pro Stock field, McGaha has a feeling this could be his weekend.

“You feel that way, but until it happens you don’t know,” McGaha said. “But if we can continue to make good runs, I am feeling very confident.”

McGaha’s run from day one was challenged by defending event winner Erica Enders-Stevens. The driver of the Elite Motorsports Chevy Camaro posted a 6.531 to pull right behind McGaha in the 16-car lineup. Enders-Stevens will race local favorite Matt Hartford in the first round.

John Force races to provisional No. 1 in Pheonix