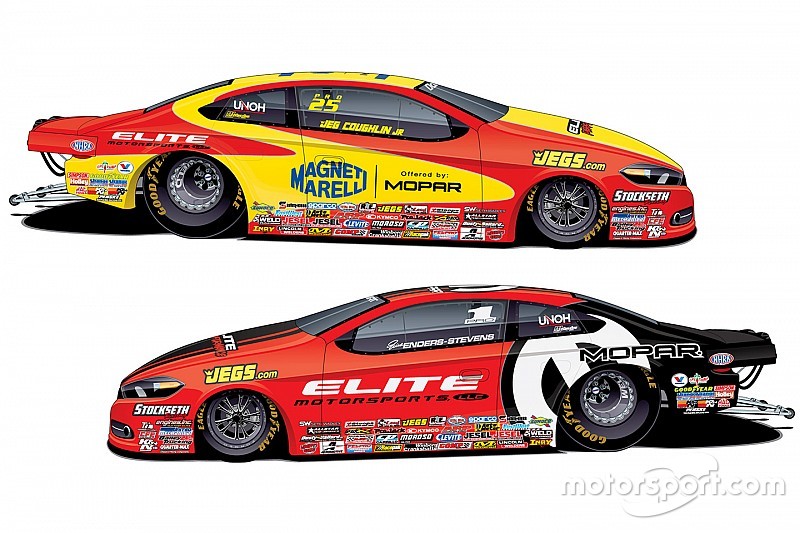 You just don’t win two consecutive championships in any racing category without great people behind you. That’s something Erica Enders-Stevens learned in her long journey to success.

It wasn’t until she hooked up with Richard Freeman’s Elite Motorsports that Enders-Stevens found the success she so longed for, worked for, banged on doors for all her life. Sure she had a Disney movie about her youthful exploits in NHRA Junior Dragsters, but the ascent from there was much like a stock market march: up a bit, down a lot, up a bit, stagnant for a while… it’s always a long journey and one that requires stamina and a rock hard hide.

Richard Freeman built Elite Motorsports piece by piece and, by adding the engineering savvy of Nick Ferri to his corps of crew chiefs that includes Rick and Rickie Jones, Mark Ingersoll and newly arrived Brian “Lump” Self. This is a team that works hard together and plays hard together. Their Halloween costumes (put together by Erica and her sister) at this year’s penultimate NHRA Mello Yello Drag Racing Series race on The Strip at Las Vegas Motor Speedway were indicative of the fun and camaraderie that helped give Elite - not just its driver - a second straight title to cheer about.

Nick Ferri is the guts of the enterprise, a guy born in Denver who got his start in drag racing by building his own 1968 Camaro and racing it at the fabulous Bandimere Speedway dragstrip near his home. Like so many in the business, Ferri started small with his own car, matriculated from the school of hard knocks with a variety of race teams and finally found his current home at Elite Motorsports. He’s co-owner, along with Freeman, of Elite Performance, the engine-building concern that looks after Enders-Stevens’, Drew Skillman’s, Vincent Nobile’s and, next year Jeg Coughlin Jnr’s race cars.

The skill sets these four drivers bring to Elite’s program can’t be under-emphasized, although they need the usable power Ferri makes to allow them to show their capabilities behind the wheel.

No more secrets in Pro-Stock

In Pro Stock, to this day, there are way too many secrets, which is why the category is being changed for the 2016 NHRA campaign. In this coming year, carburetors will disappear, as will nose-cone intake systems that rammed air to those dual carburetors. Instead of having air coming in from atop cowling, it now enters closer to the ground. That means a lot for engine builders, as cooling the engine is paramount to achieving maximum horsepower.

And maximum horsepower is where it’s at in any phase of drag racing, from the nitromethane-burning Top Fuel and Funny Car powerhouses to Summit Racing amateurs.

Until recently - at this year’s midsummer Sonoma race, to be exact - fans were unable to see the engines that power Pro Stock cars; it was at that race where NHRA ruled all Pro Stock entries must face the crowd engine-first and uncovered. Some teams embraced the idea; others still decline to follow the rule. Engine and car manufacturer identifying logos were mandated at the same race with windshield identification.

Richard Freeman was among the first to embrace these two rulings by the sanctioning body and his partner Ferri, who co-owns Elite Performance with Freeman, was right there in wanting to see this type of edict from NHRA.

At the same time, NHRA told Pro Stock teams they’d be limited to a 10,500-rpm limit for the 2016 season. As Ferri had his engines running close to 11,000 rpm, this edict wasn’t a big deal to him, or at least not as big as some of his competitors, who were edging closer to 12,000. But it was - and is - a big deal to install Electronic Fuel Injection (EFI) from Holley, as Ferri honed his skills working with carbureted engines, not injected ones. Thankfully, the team has Jake Hairston, lead engine assembler, on staff and he’s the EFI guru of the squad.

To add to Ferri’s challenges for 2016, the Elite team is working with Mopar for the first time; both titles came with Chevrolet Camaro packages. Enders-Stevens and Coughlin Jnr will both drive Mopars in the upcoming year while Skillman (this year’s Auto Club Road to the Future awardee) and Nobile continue with GM products. It’s not the first time Ferri has built Mopar engines; in previous work with Coughlin Jnr and his Team JEGS squad, he developed Mopar engines that were sufficiently virile.

Now that he’s got five championships (Coughlin Jnr in 2002 and 2007, Mike Edwards in 2009 and Enders-Stevens the past two seasons), Ferri is hungry for more. It wasn’t enough to sew up a second straight title at the penultimate race this year, albeit easier than having to wait until the finals of the last race in 2014, which they won.

Nick Ferri and his team at Elite Performance are hard at work with their new EFI-based power plant, on the dyno the week before Christmas as they ready for the first race of the 2016 NHRA calendar on Valentine’s Day, February 14th. Their first pulls had them down about 200 horsepower from the approximate 1400 they’d attained with their carbureted 500 cubic-inch V8 engine, lowered thanks to a too-rich mixture. The second pull was only down 150, the third within 40 horsepower of their season-ending figure, achieved at a lowly 9,000 rpm.

It’s only going to get better from here, as the Elite Performance team learns more about their new package and the Elite Motorsports team prepares their new induction system (sans high nose intake) for the upcoming year. While the Pro Stock category doesn’t get the press of fire-heaving Top Fuel and Funny Car entries, it remains one of the most sophisticated and intellectually stimulating racing classes of all. And that’s due to to people like Nick Ferri, always looking for the next technical advantage.