Eight NHRA rookies eligible for 2012 Road to the Future award 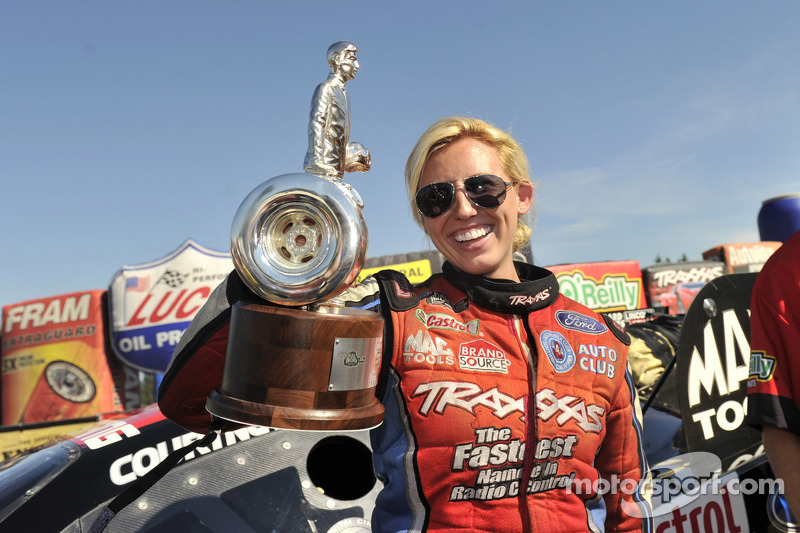 The award, which recognizes the top rookie competitor in the NHRA Full Throttle Drag Racing Series and offers a $20,000 prize and traditional trophy to the winner, will be presented during NHRA’s annual championship awards ceremony on Monday, Nov. 12 at the Hollywood and Highland Center in Los Angeles. More than 150 of the nation’s leading auto racing journalists will select the winner through a voting system based on the following criteria: number of events participated, performance on and off the race track, participation in NHRA promotions and relationships with fans, sponsors and media.

“For more than 100 years the Automobile Club of Southern California has represented integrity, commitment and professionalism to our millions of members. The Road to the Future Award has come to symbolize these same attributes in the sport of NHRA Full Throttle Drag Racing,” said Robert T. Bouttier, president and CEO of the Automobile Club of Southern California. “To be nominated recognizes not only that a rookie driver had a noteworthy first season, but also that they demonstrated exceptional potential for the future. We congratulate all eight of the nominees for this year’s award and look forward to enjoying their achievements both on and off the race track for many years to come.”

alBalooshi, 45, a native of Doha, Qatar who resides in Los Angeles, raced to his first career Top Fuel victory at the Auto-Plus NHRA Nationals at Maple Grove Raceway in Reading, Pa. in October. He qualified a season-best third at Norwalk in his Al-Anabi Racing dragster. With his win, he became only the third driver from outside North America to win a Full Throttle Series event.

Alexander, 24, from Smith Mountain, Va., qualified for six of the 10 events he entered in the Paul Smith-tuned Auto Service Plus Chevy Monte Carlo. He qualified a season-best 11th in the 16-car field at the AAA Texas NHRA Fall Nationals.

DeJoria, 35, from Los Angeles, raced to a runner-up finish at the Ford NHRA Thunder Valley Nationals at Bristol, Tenn., and qualified a season-best fifth at the Mac Tools U.S. Nationals at Indianapolis in her Tequila Patron Toyota Camry.

Force, 24, from Yorba Linda, Calif., raced to her first career victory at Seattle in only her 15th start. She also posted runner-up finishes at Chicago and Denver and No. 1 qualifying efforts at Indianapolis and Dallas behind the wheel of her Traxxas Ford Mustang. After qualifying for every race during the season she also qualified for the Full Throttle Countdown to the Championship playoffs, guaranteeing a top 10 points finish.

Hall, 41, from Hamden, Conn., raced to a semifinal finish at Brainerd on his Soverign-Star Racing Buell and qualified a season-best sixth at Norwalk.

MaGaha, 33, from Odessa, Texas, advanced to the semifinals in his first race appearance of the season at the Tire Kingdom NHRA Gatornationals in Florida. He qualified a season-best 10th at that race in his Harlow Sammons of Odessa Dodge Avenger.

Pollacheck, 43, from Medford, Ore., qualified for every Pro Stock Motorcycle event during the season and earned a spot in the Full Throttle Countdown to the Championship, guaranteeing him a top 10 points finish. He raced to a season-best fourth starting spot at Houston aboard his Soverign-Star Racing Buell.