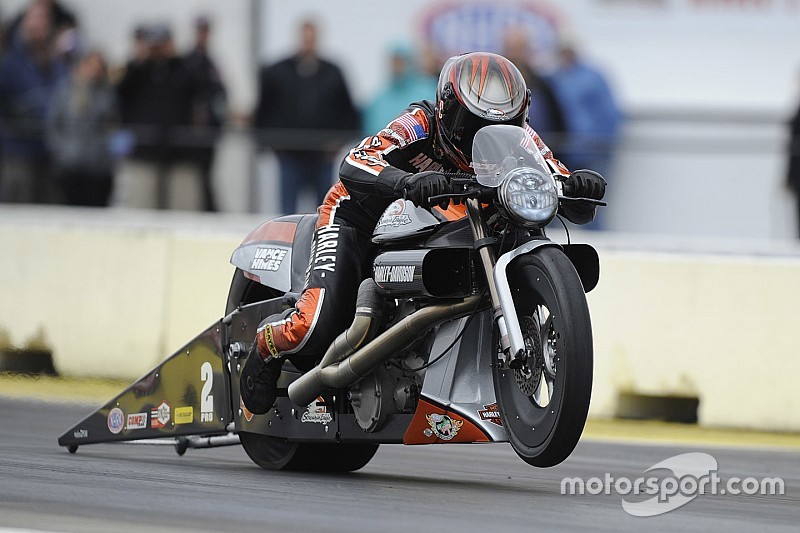 Indianapolis – Eddie Krawiec thought he had accomplished enough in his standout Pro Stock Motorcycle career to know what winning the world’s most prestigious drag race, the Chevrolet Performance U.S. Nationals, would feel like and would mean to his career.

You try to treat every race the same but that’s easier said than done with Indy.

The three-time world champion had won world titles, won in front of family and friends at his hometown track in Englishtown and had posted 24 career victories before entering the winner’s circle for the first time at Indy in 2014.

From there, it didn’t take long for Krawiec to understand the magnitude of winning the prestigious Chevrolet Performance U.S. Nationals and he quickly remembered the moment that realization set in.

“To be honest, it was walking the track with my daughter after the race,” Krawiec said. “It was an awesome deal. You try to treat every race the same but that’s easier said than done with Indy. I’ve won my hometown race in Englishtown and won world championships, but the one question you always get is, ‘Are you ever going to win Indy?’ To say you’ve done it, that puts a smile on my face. To get that win, that was my championship last year.”

After winning for the first time a year ago, Krawiec wants a second win on his Screamin’ Eagle Vance & Hines Harley-Davidson at this weekend’s 61st annual Chevrolet Performance U.S. Nationals at venerable Lucas Oil Raceway at Indianapolis.

Richie Crampton (Top Fuel), Alexis DeJoria (Funny Car) and Shane Gray (Pro Stock) were also last year’s winners. Once again, ESPN and ESPN2 will provide national television coverage of the Chevrolet Performance U.S. Nationals. The event, which has provided drag racing’s biggest stage for six decades, is the 10th of 16 events during the 2015 Pro Stock Motorcycle season and the final race of the NHRA regular season, giving riders one last chance to qualify for the Mello Yello Countdown to the Championship.

Alexis Dejoria and Courtney Force: Countdown to the the world’s most prestigious drag race