EPPING, NH ---- In a rematch of their Father’s Day first round battle in Bristol last weekend Courtney Force came out on the winning side today taking out father and 15-time NHRA Funny Car champion John Force in the final round of the Inaugural Auto-Plus NHRA New England Nationals. 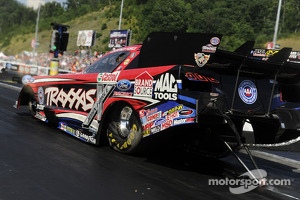 The second year driver won for the second time this season and third time in her career outpacing her teammate 4.301 seconds to 4.361 seconds in front of a capacity crowd at New England Dragway.

“I told him I was definitely going to try to get revenge, but last time I told him I was going to beat him for a Father’s Day gift and give him the day off, it definitely backfired on me and he got the win. I decided to keep my mouth shut this time. I was just hoping we could get a little bit of revenge over him and we were able to do that. Being that it was my birthday weekend made it that much better,” said Force, who turned twenty-five on Thursday.

“I knew I didn’t get my energy level up with my dad, I was actually too afraid that I was going to red light, especially because I walked into the bus right before final round and I heard him say ‘red light.’

I was like, okay, well I don’t want to red light against dad. But then it was in the back of my head and I thought maybe he was playing games with me, secretly, but it worked.

I think he went in deep on me. I was just trying to do the same ol’ thing. I mess with him about every other weekend, but I thought, ‘I’m not going to mess with him,’ especially because I didn’t want to throw my own routine off. I just tried to do the same ol’ thing and he went in there deep. I’m surprised he didn’t put out the top bulb on me. But it was all fun,” said Force.

“This was good for our whole team. All of our teams and our sponsors, Traxxas, Castrol, Auto Club, Mac Tools, Ford, and BrandSource. We’re all very excited to take home a win here.”

This was the 220th Funny Car win for John Force Racing and was the 38th time JFR had two Funny Cars in a final. The last time JFR squared off for a win was 2012 in Phoenix when Robert Hight and the AAA Ford Mustang defeated Mike Neff’s Castrol GTX Ford Mustang.

“I want another 200. If you start living on your laurels and what you did in the past you will never make progress. You don’t look back you just keep looking ahead,” said John Force JFR CEO and 135-time Funny Car winner.

For the third time John Force came up short against a daughter in a Funny Car final round. Previously he was 0-2 against Ashley Force Hood losing to her in 2008 in Atlanta and in 2010 at the Mac Tools US Nationals.

Courtney Force had to beat Alexis DeJoria, veteran Tim Wilkerson, 2012 Funny Car champion Jack Beckman to reach the final round match-up with her dominant father. Her Traxxas Ford Mustang was strong all day consistently going down the track and affording the second year driver the opportunity to move from 8th place in the Mello Yello point standings this morning to 4th place at the end of the day.

She jumped over John Force, Jack Beckman, Ron Capps and Tim Wilkerson in the points today. The win in the final over John Force moved her from 5th to 4th in the standings. It was Force’s seventh final round appearance in 34 races. It took her famous father 62 races to reach seven finals.

“I was little nervous that dad got lane choice, but luckily throughout the day when he had lane choice he took the left lane and when we had lane choice we kept picking the right. I thought good, we’ll both be happy in the final round, we’ll get the lanes that we want,” said Force.

“I was a little surprised. I think we both were just trying to go after a pretty good run down there and we both got in trouble. I think that’s a smart thing to do with the teams. Go after the quickest run possible because you know someone is going home with the win.”

The semi-final round was a big step for the 2012 Automobile Club Road to the Future Award winner, as NHRA professional rookie of the year. The last time she faced Beckman was the semi-final round of the fall Las Vegas national event where Force suffered her only red-light in competition. Showing no hang-over she left on Beckman today and never trailed in the race winning 4.175 to 4.279 seconds.

In addition to winning the first Wally trophy ever presented for an NHRA national event at New England Dragway Force also put a 55” flat screen TV in the hands of George Hayden, of Lowell, Massachusetts who won the Win with Force promotion. Yesterday John Force by virtue of being the No. 1 qualifier won a front loading washer and dryer for a lucky fan.

“I woke up today and I just had a good feeling about today. I was hoping that we could be the first Funny Car to take home a win here at New England Dragway. They built a really great track here. We’re excited to be racing here.

We went to the top spot in qualifying and got bumped by my dad. I thought, ‘Man, he’s moving around me in points,’ and it was just time for a little revenge,” said Force who moved up to 4th in the Mello Yello points with her race win.

“My team needed this win. This Traxxas Ford Mustang team with all my guys and Ron Douglas (crew chief), they’ve really been working hard on this car. They give me a great race car every weekend. We’re usually picking up the most bonus points of all the cars and trying to work our way up to the top of the ladder. I definitely think we’re making some big moves now,” said Force.

In the final round the elder Force had his hands full and was caught up in the moment racing one of his daughters.

“It started spinning the tires at the other end in the first round against Richards and I pedaled it. It dropped some cylinders but I got the win. I was just programmed and when you get to the final and you have it close to the lights (finish line) you have to drive it. You can’t get out of it and I knew she would be out the window but I didn’t think,” said Force, who was racing in his 218th final round.

“When it spun in the final my brain took over and I lifted. It was driver error and I would hate to blow it up and lose points and hold up the show. We moved up in the points and I didn’t want to mess that up. We moved from the cellar a couple of race ago to almost the top.”

Force was looking for his 136th win and back-to-back wins for the first time since 2010. His race day started against a rookie driver, Dave Richards, who was thrilled to be qualified and overjoyed to be racing John Force in the first round. Force was equally excited to be taking on a new driver who would motivate him to continue to fight.

“I get pumped up racing guys like Dave Richards because they are chasing the dream. I started chasing that dream forty years ago. As long as you have that dream you will be OK. We get caught up out here in corporate America.

You forget why you came to race. We have a great race car and it has taken time to get us running. Just to be here with all these young kids. When you see a kid like him that that is building his program it makes you appreciate all the hard work.”

For rookie driver the first round match-up was about managing his excitement and not creating problems for his opponent. Richards was competing in front of a capacity crowd for the first time behind the wheel of his Paul Richards Racing Monte Carlo. His previous laps were in testing and licensing when those in attendance included a skeleton crew and empty grandstands.

“Right before we fired the car up I was like, ‘Holy crap I am racing John Force.’ We went in and did our burn out and as I stopped I saw him blow by me doing one of his crazy long burnouts. I was like that is cool. I really wanted to do a shorter burnout and get right back up there so we weren’t holding anybody up.

That was our biggest thing being the new guy out here everyone is watching you closely and you don’t want to hold anyone back,” said Richards. “I just went in first and was like this is cool. I am staging with John Force. All these thoughts are running through my head. He went in then I staged, he staged and I was like, ’Holy crap. Here we go.’”

In the opening round the AAA Northern New England Ford Mustang of Robert Hight was out in front of Del Worsham’s DHL Funny Car when it lost power at the top end. The track conditions were fluctuating with every pair as an early morning rain shower and the resulting humidity threw curve balls at a number of crew chiefs in Top Fuel and Funny Car.

Hight’s time of 4.405 seconds was not an indication of the power his BOSS 500 generated on the first 600-700 feet of his race against Del Worsham. At the finish line stripe Hight was only travelling at 216.93 mph which is the speed the AAA Mustang reaches as it accelerates past the 400 ft. mark. Worsham took the win but Hight maintained his position in the Mello Yello Drag Racing Funny Car Top Ten.

“This was a tough one to lose no doubt about it. I really wanted to give that Wally (winning trophy) to the AAA Northern New England office. We had a good effort in qualifying which was good but we need to match that up with some round wins on Sunday. We’ll be in Chicago in a couple of days. I like racing every weekend because you can’t dwell on a win or a loss,” said Hight.

“The big win this weekend for the AAA Mustang is how the fans reacted to seeing NHRA. We had people going through our AAA display which was right across from my pits all day every day. This place was packed and we can’t wait to get back here next year.”

It was another tough first round outing for the Castrol EDGE Top Fuel dragster. The tricky track conditions and a new racing surface foiled a great opportunity for the rookie driver from Yorba Linda, California.

In the first round Brittany Force faced seven-time Top Fuel champion for the second time this season. At the spring Las Vegas race Brittany lost a close race in the second round to “The Sarge.” Today the new driver continued her education behind the wheel of the 10,000 hp Top Fuel dragster losing a close race as both dragsters hazed the Goodyears with Schumacher grabbing the win, 4.022 to 4.153 seconds.

“We had Tony Schumacher in the first round. It's the second time we've run him and he beat us again, but well get him next time. He just had the better car. We both went up in smoke and pedaled it. It hooked back up, but it still wasn't quick enough. The entire Castrol EDGE team and I will be ready for Chicago next week,” said Force.