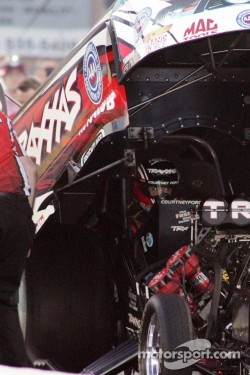 INDIANAPOLIS, IN --- Rookie driver Courtney Force held onto the No. 1 qualifying spot today, the first of her career, after sessions we re-opened with two final qualifying hits. Last weekend Force posted a career-best 4.049 and set a new track speed record all in one impressive pass, leaving it up to the weather to determine if other NHRA drivers would have the chance to take that away from her on race day. For the rookie driver earning her first career No. 1 was a historic event when you consider she will share top billing with Pro Stock driver Erica Enders. For the first time at the Mac Tools US Nationals and just the second time in the history of the NHRA women qualified No. 1 in two Full Throttle Drag Series categories. Force also became the first Funny Car rookie since Henry Harrison in 1971 to qualify No. 1 at the Mac Tools US Nationals.

“It was awesome holding onto the top spot. We set the No. 1 with the 4.04 last week and we had to sit around for a week and hope that no one was going to take that from us today. There was a lot of anticipation and frustration. I wanted that No. 1 spot. It is Indy. It is the biggest race of the season. It was even bigger since I got the No. 1 spot with Erica Enders. It seems like we are linked to a lot of history; the win in Seattle and now this No. 1,” said Force.

Force spent the past week in Brownsburg with her father, 15-time champion John Force and her brother-in-law Robert Hight before finally getting the chance to finish up qualifying rounds.

“I am so excited to be No. 1. I was nervous that last run. I was thinking that I knew Beckman could go after it out there. It made me nervous, but we were going out there to go after it too. We tried to step it up and see what that Traxxas Mustang would do,” said Force.

The Traxxas Ford Mustang did not improve in qualifying today, but made two good passes at 4.128 and a 4.087. No one was able to run quicker than Force’s previous 4.049.

“I saw him (Beckman) a little ahead of me out of my window, but my guys got on the radio and told me we had the No. 1. They were yelling at me, which was great. Getting my first No. 1 at Indy was more than I could have asked for,” added Force.

Throughout qualifying, Force accumulated seven bonus points, which was second-best to Jack Beckman who racked up 8 points. Force scored qualifying bonus points in four of the five sessions.

“This season is going better than I could have asked. It is because I have a great team behind me. I have great crew chiefs like Ron Douglas, Dan Hood and the help of guys like Mike Neff and Jimmy Prock. They give me a consistent race car every weekend out here. Maybe we will stumble one run, but we bounce right back. I have a competitive car. That is huge especially at Indy,” said Force.

Coming into today’s final day of qualifying the pressure was on Robert Hight and the Auto Club Ford Mustang team. They were on the outside of the Top 12 and in jeopardy of not making the field. On their first run they put a decent number on the scoreboard, 4.175 seconds at 306.05 mph. It was one thousandth of a second quicker than Cruz Pedregon who was also trying to race into the field.

“The first session is what set us up. We did exactly what we needed to do; make a run to get into the field,” said a relieved Hight.

In the final qualifying session Hight and the Auto Club team were locked into the field and crew chief Jimmy Prock knew that track conditions could take a much stronger tune-up. The veteran crew chief was not swinging for the fences but he definitely loaded up the Auto Club Ford Mustang to make a strong run.

“When we ran tonight, we knew we couldn’t be bumped out. It wasn’t like we threw a Hail Mary or anything. We just made the run that Jimmy has been wanting to and we got this thing fixed. A week made a difference,” said Hight, referring to the rain delay.

“We worked at the shop and everything, but if we could’ve done this last week, I believe we’d be talking up in the tower for being No. 1 because this car is really close to flying. It’s back on track and I’m excited. It’s a cool feeling now not being in a protective mode of ‘we’ve got to get qualified.’ Nope. Tomorrow we go out here and we race, try to win the race and get the No. 1 spot (in Full Throttle points) back.”

Hight is 58 points behind Full Throttle point leader Ron Capps who has a tough first round match-up with his teammate and Countdown contender Matt Hagan. If Hight can advance three rounds further that Capps he will go into the Countdown as the No. 1 Funny Car driver. Hight will also face a tough first round opponent in Cruz Pedregon.

Neff did not move up but he received a boost when Robert Hight jumped up to the No. 6 spot along with Capps’ improvement to No. 3. He will not face Force but rather Tony Pedregon.

“We’re definitely happy to get to finish qualifying and get those two more runs. That’s always a good thing. You know, the conditions got really good again tonight and I was trying to run better than we did last week,” said Neff. “The main thing is I don’t have to race my boss John Force in the first round tomorrow. That’s what I was hoping to change somehow. Either I could do it or someone else could bump that ladder around so I didn’t have to race a teammate.”

Neff, last year’s Mac Tools US Nationals winner, will face former JFR driver Tony Pedregon. Neff has a strong record of 11-7 versus Pedregon and has been on a hot streak winning the last eight times the drivers have met, all in the first round.

Finally the biggest news of the day for the winningest driver in NHRA history was his strong qualifying position coupled with the structure of the ladder locked John Force into the 2012 Countdown. That guarantees for the 28th consecutive year Force will finish in the Top Ten. While Force was pleased with the continued improvement of his Castrol GTX HIGH MILEAGE Ford Mustang, a No. 8 qualifying spot at 4.077 seconds, he was thrilled to see all his Mustangs in the show and in the Countdown.

“This is Indy. Robert Hight is fighting his way back. That is excellent. Jimmy Prock did a great job putting him back up there in the top. And Courtney, first time ever low ET. I’ve been to Indy a million times and struggled just to qualify. For her to come here and get a low ET with a 4.04, my hat is off to (crew chief) Ron Douglas and her team. Everyone has chipped in to help all the teams. My crew chief brain-trust with John Medlen, Bernie Fedderly, Prock, Neff, Guido, Danny DeGennaro and Douglas has all come together,” said Force.

Force will face driver Johnny Gray in the opening round of the Mac Tools US Nationals. He holds a winning record, 10-8, against the Don Schumacher Racing team driver but he has fallen to the wily veteran the last five meetings.